MongoDB looks to compete on every cloud, as Microsoft and IBM gear up to steal its customers.

Welcome to the big leagues, MongoDB. Now watch your back.

That's the advice MongoDB seems to be taking as it announced on Tuesday a significant upgrade to its cloud-based MongoDB Management Service (MMS) that will simplify running its NoSQL database across multiple clouds.

MongoDB said the MMS service, which runs in the company's own cloud or on premises, will let customers provision, deploy, upgrade, and maintain MongoDB database instances on multiple public clouds, including Amazon Web Services (AWS), IBM Cloud, the Google Compute Engine, and Microsoft Azure. The move comes as IBM is gearing up the Cloudant database-as-a-service (DBaaS) offering it acquired in February, which is based on open source CouchDB, and as Microsoft prepares to take its DocumentDB service into general availability.

MongoDB has faced cloud competition before, notably from various NoSQL options on AWS, but where Amazon's DynamoDB competes more directly with Cassandra, IBM and Microsoft are going directly after MongoDB's customer base with document database services.

With this week's MMS upgrade, MongoDB is emphasizing that its database can run on any cloud as well as on premises. This gives customers the freedom to seek the most competitive cloud.

"The cloud providers are dropping their prices aggressively this year, so companies are starting to explore different cloud options," Kelly Stirman, MongoDB's director of products, said in a phone interview with InformationWeek. "They're looking for deployment options that make it easy to move workloads without being penalized by cloud vendors."

While those cloud vendors might point out that it's easier to consume a DBaaS service -- like Cloudant or DocumentDB -- than to deploy and manage a database on cloud infrastructure, Stirman warns that some cloud vendors impose fees to move your data out of a single-cloud DBaaS offering. 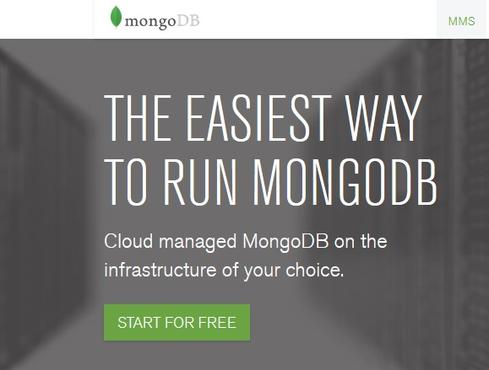 Confusingly, MongoDB is also available as a DBaaS service on Amazon, Microsoft Azure, and IBM cloud, but the MMS improvements are aimed at those who wish to manage the database more directly. MongoDB said MMS capabilities include deployment of MongoDB topologies at scale "with a click of a button," advanced integration and optimization for AWS, software upgrades and downgrades "with no downtime," continuous backups, point-in-time recovery, and performance alerting.

"Whether you want to run MongoDB in your own data center, on AWS, on Rackspace, or even on your laptop, you can manage that deployment on MMS," said Stirman.

Until now, MMS has been a free service in the cloud, while software for on-premises use was purchased. With Tuesday's release, MongoDB is switching to a freemium model whereby the first eight servers (or instances) in the cloud are free, and each server or instance above that threshold is $50 per server, per month. Optional backup storage is $2.50 per gigabyte, per month. Optional support with a guaranteed service-level agreement is $450 per server, per month or $5,000/server per year.

Doug Henschen is Executive Editor of InformationWeek, where he covers the intersection of enterprise applications with information management, business intelligence, big data and analytics. He previously served as editor in chief of Intelligent Enterprise, editor in chief of ... View Full Bio
We welcome your comments on this topic on our social media channels, or [contact us directly] with questions about the site.
Comment  |
Email This  |
Print  |
RSS
More Insights
Webcasts
How Elite Analyst Teams are Transforming Security with Cyber Reconnaissance
Making Cybersecurity Work in Small and Medium-Sized Businesses
More Webcasts
White Papers
Two-Factor Evaluation Guide
Presenting Your Cloud Security Strategy to the Board
More White Papers
Reports
Are Unprotected Cloud Databases Leaking Your Data?
How IT Security Organizations are Attacking the Cybersecurity Problem
More Reports

The increasing number of forms of MongoDB availability, along with the added charges, are a sign of how essential the NoSQL systems have become in the era of big data.
Reply  |  Post Message  |  Messages List  |  Start a Board

Databases are important enough services that it seems logical companies will be interested in maintiaining as much control and portability as they can; independence from an IaaS provider is a bonus. I agree that the product suite is not particularly simple or streamlined, though.
Reply  |  Post Message  |  Messages List  |  Start a Board
Editors' Choice
Hot Topics