MongoDB announced Tuesday that BMC veteran Dev Ittycheria will take over leadership of the company from current CEO Max Schireson, who will become vice chairman.

MongoDB has been highly successful during Schireson's three-and-a-half year tenure, establishing itself as the leading NoSQL database vendor and growing from 20 to 400 employees. But Schireson says MongoDB needs a different leader to bring the company to the next level.

"Growing the company from 400 to 4,000 employees, over whatever period of time, will involve a different level of operational complexity... Dev has experience managing larger organizations," said Schireson in a phone interview with InformationWeek.

Ittycheria co-founded enterprise software company BladeLogic in 2001 and served as CEO until he took the company public in 2007 and then sold it to BMC Software for approximately $900 million in 2008. After the acquisition, Ittycheria became president of BMC's Enterprise Service Management business, a unit with $1.4 billion in annual revenue and more than 4,000 employees.

MongoDB landed a massive $150 million venture capital round last fall. The next logical step for the company (and for rivals, including Basho, Couchbase, and Datastax) is either an initial public offering or acquisition by another company.

"I'm thrilled by the opportunity to help create the next great database company," said Ittycheria in a statement. 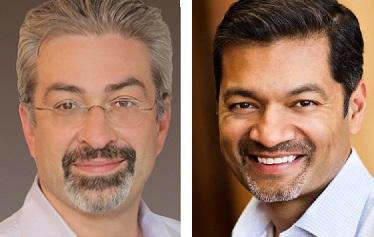 Schireson says he will focus on customers, partnerships, and product strategy as vice chairman, serving alongside MongoDB chairman and co-founder Dwight Merriman, whom Schireson succeeded as CEO. Schireson said he sought the change after logging more than 300,000 miles of air travel over the last year while living in Palo Alto, Calif., and leading a company headquartered in New York.

In a blog post about the CEO shift, Schireson noted that he has 9-, 12-, and 14-year-old children at home and that his wife is a busy doctor and professor at Stanford University.

"As a male CEO, I have been asked what kind of car I drive and what type of music I like, but never how I balance the demands of being both a dad and a CEO," wrote Schireson, noting that his wife is often asked that question. "A few months ago, I decided the only way to balance was by stepping back from my job."

Doug Henschen is Executive Editor of InformationWeek, where he covers the intersection of enterprise applications with information management, business intelligence, big data and analytics. He previously served as editor in chief of Intelligent Enterprise, editor in chief of ... View Full Bio
We welcome your comments on this topic on our social media channels, or [contact us directly] with questions about the site.
Comment  |
Email This  |
Print  |
RSS
More Insights
Webcasts
How Elite Analyst Teams are Transforming Security with Cyber Reconnaissance
Making Cybersecurity Work in Small and Medium-Sized Businesses
More Webcasts
White Papers
Passwordless: The Future of Authentication
All In, Online Gaming & Gambling
More White Papers
Reports
Are Unprotected Cloud Databases Leaking Your Data?
IDC FutureScape: Worldwide Digital Transformation Predictions
More Reports

I've long thought that MongDB would be a good acquisition for IBM. They have a partnership already, it fills a void in IBM's portfolio, and NY-based MongoDB is well known to IBM's leadership. The danger is that MongoDB would lose its spark. I can think of several IBM acquisitions (Cognos, Netezza) that have kind of lost their groove after the deal, usually because the leadership splits and the aggressiveness and innovation disappears.

If MongoDB's venture backers are patient, they'll give it time to go IPO. If not, expect a deal, but in my book, independence would be the best path for MongoDB for now.
Reply  |  Post Message  |  Messages List  |  Start a Board

What do you think is more likely, Doug, the IPO or an acqusition?
Reply  |  Post Message  |  Messages List  |  Start a Board

When Cloudera changed CEOs last year, former CEO Mike Olson became Cloudera's chief strategy officer and has stayed very much involved in technology leadership. Tom Reilly, the new CEO, was brought in as the new corporate leader, and they touted his experience in moving companies toward an IPO. At MongoDB, Schireson said he'll still be involved, but his successor will be CEO in every sense of the title, managing the company and leading tech as well as business strategy -- with input from two former CEOs, Schireson as vice chairman and Dwight Merriman, co-fouder and chairman.