Will Salesforce.com's new Wave Analytics Cloud cause ripples in the enterprise tech sector, or will it be a tsunami?

Make no mistake: Wave is a big bet for Salesforce, and it's not some lightweight tool that was thrown together as brochureware for Dreamforce. At least two years in the making, Wave is a cloud-based data platform as well as a data-analysis front end, and it's designed to analyze not just Salesforce sales, service, and marketing data, but also any third-party app data, desktop data, or public data you care to bring into the mix.

Salesforce.com isn't coming out of nowhere with this platform. Alex Dayon, the company's president of products, was a co-founder of BusinessObjects, and more than two years ago he hired Keith Bigelow, a BusinessObjects veteran, to start work on an analytics cloud. Things really got rolling in June 2013 when Salesforce acquired EdgeSpring, an innovative analytics startup, and hired its CEO and founder, Vijay Chakravarthy, to become chief product officer for analytics.

There are dozens of BI and analytics vendors that have been trying to democratize this technology for a lot longer than two years. But with more than 100,000 customers and roughly 25 million users, Salesforce is better positioned than any startup, and many incumbents, to succeed in what is really a new market for analytics and BI -- one in which the data is often managed in the cloud and analyses are heavily consumed through mobile devices.

Given the platform behind it, the Wave Analytics Cloud already has plenty of pent-up demand. It certainly didn't hurt to be launched at a Dreamforce event that Salesforce says had 150,000 attendees and another 3 million tuning in online. But the ultimate success of Wave will depend on how well it exploits and overcomes these six pros and cons.

Pro: It's a secure, cloud-based platform.
Lots of competitors are now casting aspersions on Wave, summing it up as a simple data-visualization tool that's just for sales data. That's dead wrong. This cloud-based platform encompasses a back-end data-management service plus developer/power user and end-user-facing query-and-analysis "lenses" for data exploration and dashboards for persisted reporting and key performance indicators.

As a data platform, Wave's starting point encompasses all the sales, service, and marketing data that Salesforce customers generate. It can take advantage of Chatter collaboration, Data.com enrichment data, and Radian6 social data. The system picks up its security-and-access controls hierarchies from the Salesforce platform.

According to GE Capital's Eric Johnson, a VP of commercial sales who joined a Wednesday keynote session at Dreamforce, Wave was able to meet rigorous data-security and data-privacy requirements. That included the ability to analyze confidential data that had to remain on GE's side of the firewall, he said. 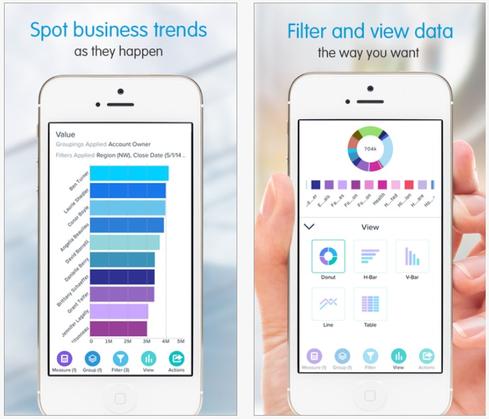 Wave Analytics Cloud's mobile-first emphasis is a strength of the platform compared with conventional BI and analytics products.

Pro: The underlying database is flexible.
Wave is based on a key-value-store, NoSQL database. Because there are no predefined schemas or cubes or requirements to conform all data to a fixed model, you can quickly bring any third-party app data, public data, or desktop data into the data store. The hardest part is extracting data from legacy systems and filtering or transforming it, if required. Salesforce does not have its own data-integration tools, but there's a long list of integration partners, including Dell Boomi, IBM CastIron, Informatica, and others.

This schema-on-read approach, which is widely being adopted in big data circles, gives analysts and end users the ability to ask any question, not just those baked into a predefined data model that takes months to develop and days or weeks to change after the fact.

Pro: It's mobile first.
Wave was designed first and foremost for smartphone and tablet interaction, but of course there are also designer- and power-user-oriented

Dennis Howlett of Diginomica raised the point that Salesforce Chatter was priced rather lavishly when it was first introduced but later became pretty much a freebie add-on for most companies. I don't think that's going to happen with Wave. It will undoubtedly come down in price, but BI and analytics capabilities generaly ARE expensive, as it's dicision-support value that's really tangible versus the fuzzier benefits of collaboration.
Reply  |  Post Message  |  Messages List  |  Start a Board

Thanks for this post, Doug, I enjoyed the read. I have another con for you. Having worked in database administration for a number of years, I'm very familiar with the reporting and analysis challenges that data can pose. While technology democratization is a step in the right direction, bad data will still equal bad results. Look for data quality to be moved to the forefront in order to get value out of Wave.
Reply  |  Post Message  |  Messages List  |  Start a Board

Salesforce.com is back in cloud pioneering mode with Wave Analytics Cloud. This is an innovative use of a NoSQL system, putting big data into the hands of many. I don't know how that will work out and am cognizant of the Garbage In, Garbage Out possibility mentioned by Berkson0. But for the companies that adopt, it's likely to yield some clear and often unexpected benefits.
Reply  |  Post Message  |  Messages List  |  Start a Board
Editors' Choice
Hot Topics