We sat down with VMware CEO Pat Gelsinger during the 2016 Mobile World Congress to learn more about the company's strategic partnership with IBM. Gelsinger also opened up about how the Dell-EMC deal has been affecting VMware's business, and shared an update on partner relationships.

BARCELONA--VMware's latest strategic partnership with IBM, the challenges it's faced as part of the Dell-EMC merger, and the status of partner relationships were among the topics discussed by VMware CEO Pat Gelsinger during an interview with InformationWeek at Mobile World Congress here.

On Feb. 22, IBM and VMware announced a strategic partnership that aims to enable enterprise customers to easily extend their existing workloads, as they are, from their on-premises software-defined data center to the cloud. As part of the deal, according to Gelsinger, IBM is "taking the full set of VMware technologies -- VSphere, NSX, plus our storage, plus our management -- and delivering that full set to the IBM cloud customers. IBM as an enterprise cloud provider is very significant, with 45 data centers worldwide. and they are making very vast investments into that strategy."

Meanwhile, VMware – which is majority-owned by EMC -- may be feeling the effects of uncertainty about the Dell-EMC deal. In late January, the company forecast that its 2016 profit and sales may miss estimates and announced 800 job cuts. VMware also has a new chief financial officer coming on board March. 1.

Gelsinger told InformationWeek, "it is somewhat turbulent during the deal process."

One of the challenges since the Dell-EMC merger was announced, according to Gelsinger, is that questions about the deal have dominated his conversations with CIOs. "I'd have an hour meeting with a CIO, and I'd spend 30 minutes describing the deal, and then 30 minutes when we go back to business. So I have 30 less minutes to talk about business," said Gelsinger.

The Dell-EMC deal has to go through the shareholder and regulatory approval processes before it's official. Gelsinger said the process will probably take until the summer, noting that "Europe has been very scrupulous about those types of deals."

When asked what kind of reaction he's been getting from the company's software and hardware partners, Gelsinger said a short period of immediate shock after the deal was announced dissipated quickly. "When I called Meg Whitman of HP, no change," he said. "Same with Lenovo, Microsoft [and others]… After we explain the deal, our commitment to an independent ecosystem, and the way we want the relationships to continue, everyone calms down and goes back to work." 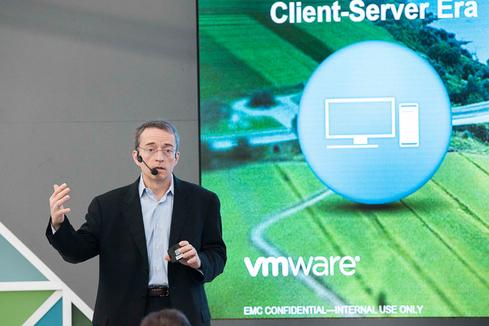 When it comes to VMware's product offerings, the focus now is on VCloud Air, the company's public cloud product. "Essentially, everybody accepts that the big three -- Google, Amazon, and Microsoft -- are building their clouds on VMware. [With VCloud Air] we also have built our own cloud as a first and vast demonstration of many of our technologies," said Gelsinger. "Our focus is on cases that are different than other public clouds. Customers that are running their private cloud on VMware would be able to take advantage of our cloud and do things such as Data Center Extension, Migrant Networking, [and] Desktop-as-a-Service."

These are very differentiated service offerings than what Amazon and Google would do, according to Gelsinger. "That is where we refocused the VCloud Air business, and we believe that will be a successful strategy."

Gelsinger said the company took a two-pronged strategy with VCloud Air, launching the service and creating the VCloud Air Network, which Gelsinger said includes "a broad set of cloud partners who build and operate their cloud using our software." The network of partners for VCloud Air includes Rackspace, OVH, Vodafone, Fujitsu, and NTT.

VMware is also at the two-year mark since its acquisition of AirWatch. "We've been carefully integrating AirWatch into VMware since that first acquisition announcement," said Gelsinger. "And now, at the two-year mark, we are integrating AirWatch's sales force with our end-user computer products. For two years we largely kept them independent, now it is AirWatch by VMware, we are integrating them as a division of our end-user computing business."

When asked if VMware is thinking about developing a purely consumer product on mobile, Gelsinger said, "Not really." However, he qualified his statement by raising the question of what we mean when we say "consumer."

"We are focused on business customers and enterprise customers, but everybody is a consumer when they walk into that business," said Gelsinger. "They want to bring their devices, they want to be able to use their device in the corporate setting, because they've [gotten] productive with that device. They really expect to have both the best consumer experience plus the enterprise-quality security."

The expectation, said Gelsinger, "requires us to be consumer friendly, and to have an experience that is as good as a consumer experience [as possible], but yet being enterprise-level secured, managed, and robust."

Pablo Valerio has been in the IT industry for 25+ years, mostly working for American companies in Europe. Over the years he has developed channels, established operations, and served as European general manager for several companies. While primarily based in Spain, he has ... View Full Bio
We welcome your comments on this topic on our social media channels, or [contact us directly] with questions about the site.
Comment  |
Email This  |
Print  |
RSS
More Insights
Webcasts
Securing and Monitoring Networks in the 'New Normal'
Building the SOC of the Future: Next-Generation Security Operations
More Webcasts
White Papers
The Essential Guide to Securing Remote Access
From MFA to Zero Trust
More White Papers
Reports
How IT Security Organizations are Attacking the Cybersecurity Problem
Special Report: Understanding Your Cyber Attackers
More Reports