SEARCH
A minimum of 3 characters are required to be typed in the search bar in order to perform a search.
Announcements
Alert
Got some free time? Grow your knowledge from the comfort of your computer for FREE!
Alert
Are you looking to stay on top of IT trends? Check out our FREE webinars and virtual events!
Alert
Planning for 2023? Be sure to check out our upcoming in-person events!
Report
How does your salary stack up? 2022 IT Salary Survey Results Revealed
PreviousNext
Big Data
5 MIN READ
News

The Internet Of Things Gold Rush

Ready or not, items from pills to power plants are poised to generate billions of data points. Here's how to stake your claim.
Art Wittmann
Art Wittmann is a freelance journalist
July 18, 2013
Really Big Data And Iffy Connectivity

An even bigger challenge than hardware will be the software on the edge devices that feed the IoT. Edge devices aren't the sensors; they're the widgets that will do something with all the data that sensors provide. We tend to think of the IoT as a vast collector of data that's centrally processed for one purpose or another. The National Oceanic and Atmospheric Administration, for example, collects all kinds of data from a wide array of devices and uses centralized computers to crank out weather forecasts. Wall Street's high-frequency trading apps collect market data and centrally make decisions on financial trades. These are typical big data applications.

But as the IoT approaches its promise of billions and billions of interconnected devices, the big data analysis model fails. And not just because there's too much data to process in a timely way -- though that's clearly an issue. It's simple physics. Petabytes of data just don't move quickly; pesky confines like the speed of light see to that.

Thus, to be effective, edge devices need a level of autonomy. Think of the Google driverless car. Sure, central systems know where the car is and what the local speed limits are, but it's the local sensor array that must tell if the road is bad or if a person or object is moving in the car's path. Local software needs to autonomously take in all this data, including the schedule of where the car is supposed to be and when, and figure an appropriate speed and other actions. This isn't the sort of thing you want centrally calculated and sent over unreliable wireless connections; the car has to be autonomous enough to truly drive itself. Similar technologies have already started to become available in high-end new cars as advanced collision-avoidance systems.

Hand in hand with autonomy is the matter of trust. Your car or your home may have thousands of sensors, and just like any electronics, they'll have limited lifespans. If an outdoor sensor suddenly registers a 20-degree drop in temperature, was it a malfunction or a cold snap? Should your home heating system act on that data or ignore it? If a substation gets a signal to go offline, is it terrorists trying to shut down a power grid, or is it a controlled brownout because of a problem with a generating station, or even more likely, could it have been human error?

Autonomous systems will check and recheck conditions before they take what are known to be extreme actions. Any action will require some redundant analysis, but the further outside the norm, the more data the autonomous system will want to know before it takes action.

The Mars rovers are extreme examples of highly instrumented autonomous systems. With minutes passing between commands from Earth and responses from Mars, a normal control system would be inherently unstable and unusable. The rovers, therefore, have the ability to make their own decisions, and because of that, they've operated exceedingly well -- far beyond NASA's anticipated use period. If the IoT is to have a many-trillion-dollar effect on the economy, it'll come in large part from systems like these and from new businesses not possible without the IoT. Take Zipcar. By embedding sensors and reworking the ignition system in the car and communicating conditions back to headquarters, the company has done away with the rental counter and allowed customers to rent for much shorter periods of time -- less than $10 will get you an hour in a car. Customers love the service, which wouldn't be possible without the IoT. The entry point to business on the IoT isn't low. It takes serious engineering and investment. But the payoff is an untapped market. And as entrepreneurs develop these new business opportunities, the providers underpinning the wired and wireless Internet will have to respond. 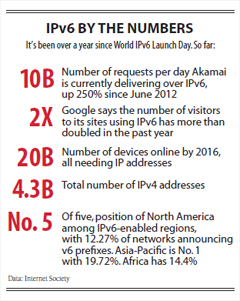 Just as in any good gold rush, it's the outfitters (technology suppliers) that are poised to make a killing, especially at first, as IoT applications test their footing. Do a Google search (heck, you can even Bing it) for "Internet of things" or "machine to machine." It's not a pile of clever startups that bubble to the top. It's Verizon, AT&T, Cisco, Intel, SAP, IBM -- the pickaxes and sieves of this gold rush will be technology, data processing and connectivity.

As for IT teams looking to cash in, if you're looking for a lingua franca of the IoT, you're thinking way too narrowly. Remember, this is like cloud computing, but even less well defined. Did the NIST cloud definitions help move functionality forward? Not much, and standards won't help much here, either. There will be specs for smart homes and different standards for smart buildings, which will be completely different from specs for medical equipment, which will look nothing like the standards for logistics or manufacturing. The commonality is connectedness and data processing and not much more. That we're giving this movement a name is more an artifact of hype than it is of anything useful in an engineering or business sense. The Web is evolving to its next stage of usefulness, and that will mean many different, loosely related things.

Think big and wide; the interconnectedness and trackability of everything, along with the capacity to analyze it, all will give rise to huge changes in the way your organization's employees and customers live and do business. But the challenges in making such an expansive vision a reality aren't the least bit trivial. They push the boundaries of technology and require significant new investments in the public and private sectors. The next Amazon or Google may well rise from the IoT -- some smart startup that bets big and wins bigger. But for most, the smart money starts with smaller solvable problems and goes from there.