WiFi Pioneer Cees Links: IoT Is Like A Butler - InformationWeek

A WiFi pioneer says we need to rethink how the Internet of Things is being marketed and sold. For starters, how about finding a better name?

WiFi pioneer Cees Links knows a little about connectivity. After selling Steve Jobs on the concept of WFi and helping to make the technology small enough to fit into smartphones and other mobile devices, Links is now CEO of GreenPeak, a company making chips for the Internet of Things (IoT).

Links is also an advocate of Zigbee, a low-power radio technology that he believes is perfect for IoT. So what does Links think is holding back IoT?

For starters, Links doesn't like the term itself. "Internet of Things is the wrong name because it isn't about things," said Links in an interview with InformationWeek. "It is about services." While we're at it, he doesn't like "smart" either. "Smart home is a wrong name and a wrong concept," he said. "Consumers can't buy a smart home at a store. They buy applications."

According to Links, in order to make "smart" anything appeal to people, or to help "IoT" make sense, we need to change our thinking. "Most people are inclined to think of the smart home as a bunch of devices," he said. "[At GreenPeak] we think of it as a service. We think you should talk about a butler, someone who delivers a service in your home. Imagine there's nobody in the home, and the backdoor is unlocked or a window is open and it is raining. You'd expect the butler to lock the door or close the window."

Further, Links said IoT has a marketing problem. IoT is marketed to "gadget people," he said, when instead it should be all about what services you can now afford. You can't afford a butler, but you can afford a device that locks your back door for you when you forget. When many companies use the term "smart" it isn't smart for the user, but for the person who sells it.

"We had a smart water meter in our house, and our basement flooded," said Links. "Did the meter tell us about unusual water flow? Did it turn the valve off? No. It just told the water company how much to charge." 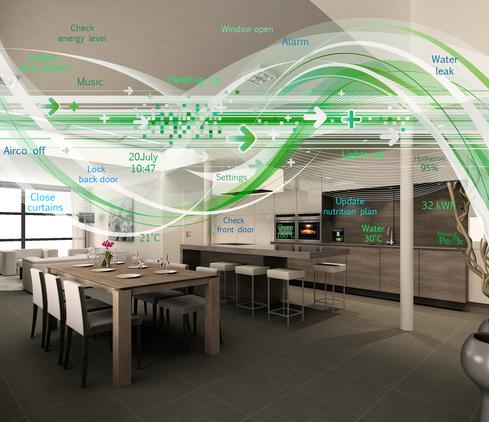 GreenPeak's vision of the smart home. But please don't call it that.

It is that inability to serve the customer that Links thinks is holding back IoT, rather than the security concerns or privacy issues that are often topics of discussion. When asked about security, Links said, "Security and privacy are not issues in isolation. They are not issues for the IoT. These are issues of the Internet in general. Security and privacy of your home and what you put on Facebook are essentially not different."

[ What else is limiting IoT? Read Internet of Things: What's Holding Us Back. ]

When questioned about new attack vectors, Links gave a surprisingly simple and straightforward answer. "Attack vectors apply to the physical world as well." These include the keys in your house, and whether you remembered to lock the back door. In other words, IoT can add to security as much as it can take it away.

So if security isn't the holdup, why can't companies figure out how to make products that serve customer needs for IoT? Links said it is about the complexity of the environment. "IoT is way more complex than, say, WiFi," Links said. "We invented WiFi, and because of Apple and Intel we got it in the PC world. But the PC world is way less complex [than IoT]. There are only a few operating systems. The input and the output is the same on all systems."

Links noted that creating products and applications for IoT is more complicated than building for the traditinoal PC environment. "The problem with the smart home is its lack of uniformity," he said. "I've heard of no one who has refused a hotel room because it has an electronic key. But no one has [electronic keys] for their house because every country has a different door lock system. There is no Microsoft for door locks. Electronic keys aren't rolled out on a worldwide basis like PCs are. Complexity and cost [are] slowing down the propagation, and when you add the poor marketing of products as things and not services, things go slower."

Links does see hope, however. Chips are getting cheaper, and sensors will hopefully follow suit, he said. But companies in the IoT space need to understand what they have and what they are selling. He used the fitness tracker as an example. The fitness tracker is sold as a gadget, rather than as a "life coach." Because of that, people often give up on it. And Links said he think this is because of the way fitness trackers are marketed and sold. "The most recent fitness band from Jawbone is $180," he said. "Instead of selling it as an expensive device with a sensor, they need to sell it as a service for a few dollars per month." Links said that change will help consumers understand what they are buying.

So how close are we to a real smart home filled with connected devices? Links said he sees a smart home in five to 10 years that is fully connected to the Internet and analytics to tell us when things are happening out of the ordinary. But it will take some rethinking. "We see the technology coming in bits and pieces, and we're waiting for the product builders with the guts to pull it all together."

David has been writing on business and technology for over 10 years and was most recently Managing Editor at Enterpriseefficiency.com. Before that he was an Assistant Editor at MIT Sloan Management Review, where he covered a wide range of business topics including IT, ... View Full Bio
We welcome your comments on this topic on our social media channels, or [contact us directly] with questions about the site.
Comment  |
Email This  |
Print  |
RSS
More Insights
Webcasts
What We Can Learn from Sports Analytics
Strategies for Success with Digital Transformation
More Webcasts
White Papers
SANS Report: Measuring and Improving Cyber Defense Using the MITRE ATT&CK Framework
2020 SANS Enterprise Cloud Incident Response Survey
More White Papers
Reports
The Malware Threat Landscape
2021 Top Enterprise IT Trends
More Reports

I would like to add in Canada it will take us 10- 20 years or more before we gonna see the same technology...

I  would love to hear what other members from other countries think???
Reply  |  Post Message  |  Messages List  |  Start a Board
Editors' Choice
Hot Topics

10 IT Trends to Watch for in 2021 Cynthia Harvey, Freelance Journalist, InformationWeek,  12/22/2020
White Papers
Eliminate East-West Traffic Hair-Pinning
5 Steps to Zero Trust in the Data Center
The Dark Side of SD-WAN
The Network for Whatever's Next; A CxO Guide
IDC Workbook: Best Practices for Cloud Security