Highlights from the stunning wall of big screens at CES 2012 include no-glasses-required 3D TVs and displays as thin as half an inch. 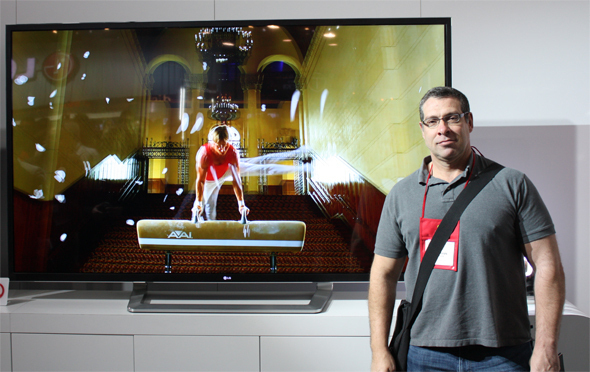 Normally, the hurried throng at CES can't get through the main entrance fast enough. But this year, as attendants passed out passive 3D glasses to all who entered, many people just stopped in their tracks and watched the 3D presentation from 50 state of the art LCD TVs working together in one very impressive video wall. Past that, LG had the coveted spot just inside the main entrance of the central hall and many attendees took their time and watched the amazing products on display.

LG and Samsung get top honors in the competition for jaw-dropping TV exhibits. LG made no attempt to hide the fact that it would be showing a 55" OLED TV at the show. We saw a number of third-tier players hawking LED TV's, possibly trying to pick up on the buzz around the LG and Samsung demos. These manufacturers were simply showing standard LCD displays with LED backlighting. It's good technology and makes for great displays, but it was new two years ago.

Common themes this year built on the themes from last year. We saw many more 3-D sets. Bezels continue to shrink, with displays pushing out closer and closer to the edge of the screen. Sets are thinner, less than a half-inch for the OLED versions, and around an inch for the LED lit LCD sets. Viewable area continues to increase. There were 70" displays in stores this Christmas and 85" displays here at CES. New for this year were so called 4K displays, with double the resolution in each direction to 3840 x 2160. That's the first step in ultradefinition designs. Full ultradef calls for doubling again in each direction to 7680 x 4320.

Sony and few others were showing no-glasses 3D displays. This is fairly new technology that depends on lighting and precise viewing angle in order to look anything like 3D. Booths had to be built with overhead cover to prevent the mercury vapor lights that normally light up the Las Vegas Convention center from totally washing out the 3D effect.

But if it's a personal viewing experience you want, we saw one completely tricked-out reclining chair with mechanical overhead arms that positioned one to three screens around you for an immersive experience. Throw in a nice sound system (which this had) and you can replace your man-cave with a man-lazyboy. The chair also comes with a keyboard arm so you can use it for work. While the experience might be immersive, the design of the chair won't earn it space in a stylized living room.

More than seven feet on the diagonal, LG's 85" 3D LED lit LCD Ultradef (4k) screen was an impressive monster. Though easily mistaken for a model, that's your humble reporter in the photo, standing next to this display to provide some perspective on its size. This giant is meant for media rooms and commercial displays; we doubt it'll make its way into most living rooms. But if you're of a mind to, the quality of the picture is incredible.