Scott Kveton? Blake Caldwell? Here are some people you probably don't know who will shape IT in the coming year. 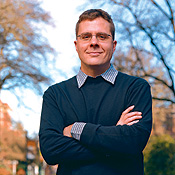 Four years ago, Oregon State University's shingle on Highway 34 in Corvallis, Ore., beckoned drivers to visit www.orst.edu. The sign was spotted by the university's president, who happened to think the school was not, in fact, the w.orst. The resulting overhaul of the school's Web address (it now resides at www.oregonstate.edu), computer network, and E-mail system enticed OSU alum Kveton back to the Corvallis campus after three years knocking around Amazon.com and other West Coast Internet startups.

Oregon State's computer department isn't a joking matter anymore. In October, the school's Open Source Lab, which Kveton runs as associate director, got a $350,000 grant from Google Inc.-the search-software company's first academic donation to support open source. The goals: to attract software companies to Portland, establish a development center for writing apps for use by state governments, and craft an open-source college curriculum. The grant also supports the lab's hosting of computer systems for the Mozilla Foundation (developer of the Firefox browser) and other software projects. The Google windfall, plus a $75,000 grant from Mozilla this fall, have raised the 19-person lab's profile in a city poised to play a strong third to San Francisco and Seattle as a West Coast tech hub.

"We realize we have a great asset here," says Kveton, 32. "Out of a lot of these open-source projects come potential markets." The Open Source Lab's servers support some 300,000 daily downloads of Firefox, which has about 3% of the browser market. The lab also runs computers that support software for the Linux kernel and the Gentoo and Debian Linux projects.

But it's Google's interest in the lab that has garnered the most attention. "It's great for open source," says Kim Polese, CEO of SpikeSource Inc., which sells technical support for open-source products. Google "has been marshaling an effort internally for a while" to establish a development center for open-source software, which is available free on the Internet and whose code users can modify to suit their needs. The success of Firefox and Linux have forced Microsoft to update its products, says Chris DiBona, an open-source programs manager at Google. Google also is a heavy user of Linux and the Apache Software Foundation's Java server.

The Portland area already has 300 IBM open-source engineers, a 1,500-employee Hewlett-Packard office, and a 15,000-person Intel campus. Plus, it's home to Linus Torvalds, creator of the Linux operating system.

And more talent is arriving. In June, a German open-source business-software company, ComPiere Inc., moved from Connecticut to Portland, after considering moves to San Francisco and Seattle. One factor in the decision: Kveton ran into ComPiere CEO Jorg Janke at a conference in Boston and urged him to talk to Portland's business-development commission. This month, Oregon state agencies, including the departments of transportation and human services, will meet with Kveton and Portland State University professor Bart Massey to plan several statewide open-source development projects. A state center for research and development, partly funded by Google, could follow. And in October, a local high-tech advertising executive, Cheryl Vandemore, started work as the state's first coordinator of open-source economic development, appointed by Gov. Ted Kulongoski.

Making Portland a hub for open source hinges on connecting people, not spending money. "We pale in comparison to these larger universities who have all kinds of resources," Kveton says. "Collaboration for us is king."

Back Issues | Must Reads
White Papers
The Path to Successful Hyperautomation Starts With the Help Desk
Are We Cyber-Resilient? The Key Question Every Organization Must Answer
A Decade of Passive DNS
Cisco Secure Email
The InformationWeek 2021 State of ITOps and SecOps Report