As the hospital revenue mix shifts from insurers to patients, online services like Simplee can improve collections with bills that are easier to understand and pay.
David F Carr
Editor, InformationWeek Government/Healthcare
October 14, 2013

7 Portals Powering Patient Engagement
(click image for larger view and for slideshow)
As hospitals find themselves billing a larger share of revenue directly to patients, it's beginning to dawn on them that it would help if patients could understand their bills.

The mix of money health insurers are collecting -- or trying to collect -- is clearly changing as the result of consumer-driven healthcare trends that have been under way for a decade, now accelerated with the implementation of the Affordable Care Act, a.k.a. Obamacare. The "consumer-driven" part of the equation is a strategy for controlling healthcare costs by giving consumers a greater role in paying the bills, prompting them to question unnecessary procedures and excessive costs. For example, when health savings accounts are combined with high-deductible health insurance plans, consumers bank pre-tax money to pay their share of the cost. Meanwhile, Obamacare makes health insurance both affordable and compulsory, which will likely bring more of the uninsured into the market with low-cost but high-deductible plans.

The challenge for hospitals is that they have become so oriented toward collecting from insurers that most are ill-equipped to cater to consumers -- they're much better at confusing them.

"Hospitals fire you out three or four bills to get you to pay once," said Michael Trilli, an analyst with Aite Group. "Meanwhile, the health insurance says one thing and the hospital says another." Presented with a flurry of bills, including separate statements from labs and specialists, combined with the need to reconcile them with an explanation of benefits statement from their insurer, consumers often hesitate to pay until they see the real bottom line. "There's a fraction of patients who could pay but don't, but I think there's a larger faction out there who are just really confused," he said.

[ Read about the new doctor's visit in American Well: The Doctor Will See You Online. ]

This is the problem Simplee is trying to address with a consumer-friendly Web service connecting hospitals and their patients. In one early success story, an implementation with El Camino Hospital in Silicon Valley, Calif., that went live in January, Simplee was able to demonstrate that many patients were willing to send an online or mobile payment if the process was sufficiently simple and understandable. Between January and June, the hospital saw self-service payments go from 2% to 33%, while the amount of time hospital staff spent helping patients understand and pay their bills dropped by 40%, according to a Simplee case study.

"It works very similarly to Mint.com," CEO Tomer Shoval said, referring to the popular consumer financial management service. "Patients get a really cool dashboard that helps them understand their healthcare expenditure." Working with the hospital and the insurer, Simplee tries to coordinate data from all sources, giving consumers a clear view of what their insurance is covering and what they are expected to pay. With a related service, which El Camino Hospital is now starting to pilot, Simplee can also present patients with an advance estimate of what any given procedure will cost, before and after their insurers' contributions. Optionally, the hospital can ask for an upfront down payment on the cost. 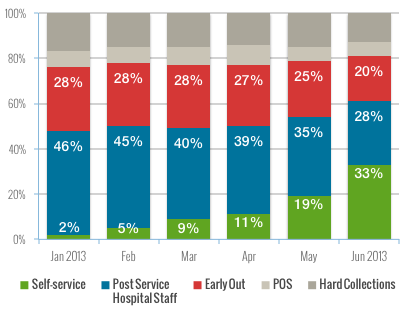 Trilli mentioned another startup, PatientPay, which is doing something similar for physician practices. Some established billing clearinghouses are also "starting to get into the game," he said, but added "this is a really good opportunity for startups to come in and solve a problem with really flexible technology."

Shoval said he and his cofounders have the advantage of coming from outside of the healthcare industry, with experience in other forms of e-commerce. He was previously managing director of Shopping.com, which was purchased by eBay. On the other hand, one of Simplee's challenges is convincing hospital CIOs that this is a service they need, when they may already have implemented some form of online billing from an established healthcare software vendor like Epic.

"My argument is, if no one's using it, if no one's making payments with self-service, then you haven't solved the problem," Shoval said. Instead of approaching hospital billing as "a complex and unique problem," Simplee works hard to approach it from the patient's point of view and streamline it as much as possible, using consumer website design techniques like A/B testing to refine its approach, he said. Simplee has also put greater focus on mobile computing or effective use of email, he said.

In September, Simplee raised $10 million in a Series B round of funding led by Heritage Group, a venture group controlled by hospitals and healthcare organizations. "We spend a lot of time with our limited partners, trying to understand what their needs are," Heritage Group managing director Paul Wallace said. "We've identified patient collection as a hot button for these guys." At least one of the hospitals in the investment group is already implementing Simplee, and others are in discussions with the company, he said.

The patient-paid component of hospital billings "has gone by some accounts from 5% to 25%," Wallace said. Patients don't trust their bills, and they don't understand the explanation of benefits statements they get from insurers, he said. "It's a huge mess." In addition to making the process more comprehensible, Simplee acts as a customer relationship management system, giving hospitals the opportunity of establishing "a positive relationship with patients that they didn't used to have," he said.