SEARCH
A minimum of 3 characters are required to be typed in the search bar in order to perform a search.
Announcements
Report
Find out what you need to know so that you can plan your next career steps and maximize your salary.
Event
Explore strategies, new technologies, and best practices to provide a secure infrastructure - Learn more at Interop!
PreviousNext
Cloud
Slideshow

Where to find the best IT words of wisdom, 140 characters at a time.
Kevin Casey
Contributor
July 15, 2013 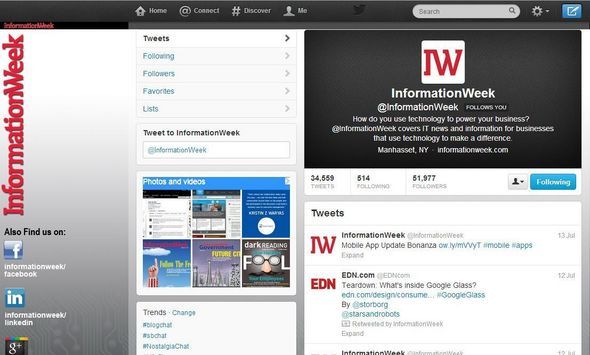 A commonly cited benefit of using Twitter is being able to network with and learn from other people, particularly other professionals and leaders in your field. Whereas some social sites require another person's approval to connect, you can follow just about anyone on Twitter without their active permission. (The rare exception is private Twitter accounts. Guess what? If your account is private, it's not on this list.) This got us thinking: Whom should IT pros be following on Twitter?

Coming up with a good list is tougher than you might think, given both the overall popularity of the site and what seems to be a rapidly growing population of people involved with IT who tweet on at least a semi-regular basis.

If you're a reluctant tweeter -- or downright skeptical of Twitter -- that's OK. There's no rule that you must suddenly start firing off wit and wisdom in 140-character bursts to use the site. In fact, new Twitter users might be best served doing more listening than tweeting as they get their bearings. If you're already a power user, good on you -- it's still always a plus when you discover someone new worth following and connecting with.

That's one of the positives of Twitter: the chance to learn. Twitter is one of the major reasons IT pros have more access to others in their industry -- from the C suite to vendors to competitors to peers -- than ever before. From a learning and networking perspective, IT pros probably shouldn't ask "Why use Twitter?" but "Why not?" You don't have much to lose, aside from a bit of time. (Let's face it, you're probably online 24-7 already.) That holds true for IT greenhorns and battle-tested veterans alike; in this field, the trends and skills change constantly. If you've stopped learning, well, best of luck.

We based most of our list on recommendations from other professionals, both inside IT and in other fields like marketing, with a couple of our own picks thrown in for good measure. There was no prerequisite job title, though you'll certainly see plenty of the letter C. Some here tweet from a perch in the executive suite; others from the trenches in areas like security, data science and cloud computing. An IT leader didn't need a gazillion followers to be considered, although some, such as Cisco CTO Padmasree Warrior, do have a gazillion followers, give or take. We excluded some groups from consideration, such as the technology analyst community, although we received some worthwhile suggestions in that area.

Certain perspectives are obviously skewed toward the person's employer; you should not be shocked, for instance, if Werner Vogels mentions Amazon Web Services from time to time. That said, a general goal for the list was to find people who tweet broadly about all things IT -- not just all things Company X. Likewise, while we leaned on the recommendations of others, a guiding principle was to find IT leaders who, like Vogels, actually respond to or engage with other Twitter users.

These, of course, are not the only IT leaders worth following on Twitter. It's a starting point, food for thought, a list to help you generate your own list. Adjust to your own preferences, interests and career goals accordingly. Got your own favorites? Don't be stingy. Tell us whom you follow in the comments below or tweet them to me @kevinrcasey.