Can you spot tech's next big thing? Check out ten hot new ideas, fresh from the Demo show, that could impact the way you work and play.
Patrick Houston
Contributor
April 24, 2012 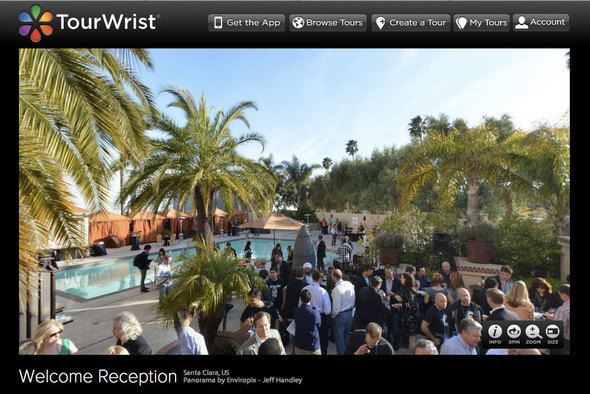 This may look like just a pretty picture, but it's not. While what you see here is a still photo, in reality it's anything but. It actually represents a stunning new visual technology that allows anyone to capture and convey a 360-degree image that's part photo, part video, and part panorama.

In fact, this new imaging technology from a San Francisco-based startup named TourWrist was so captivating that its founders walked away with a $1 million check as the People's Choice award winner at last week's Demo Spring 2012 event in Santa Clara, Calif.

Virtual panoramas, a la Google Street View, aren't new. But TourWrist is pushing the state of the art. Using planar acceleration controls, TourWrist lets you use an iPhone or an iPad to physically move up, down, left, and right as you hold the device in front of you. Even more impressive: It allows you to step into or away from any point in the picture. The company also used Demo to debut new features to move you through linked 360-degree panoramas. Imagine being able to move through each and every room of that 15-bedroom Malibu mansion you're contemplating.

TourWrist was one of 81 demonstrations at Demo, a 22-year-old conference series that ranks among the granddaddies of tech launch events. While TourWrist might be obscure now, as a Demo winner it joins select company. Other Demo debut companies that went on to become major forces in the tech industry include Salesforce, Webex, and ETrade, to name a few.

In our visual tour, you'll get a taste of some of the other products that went before a Demo crowd that included, most significantly, venture capitalists prospecting for their next big scores. When they're out looking for the next hot thing, you should be paying attention, too.

Each presenting company received six precious minutes--just six--to prove its status as revolutionary, disruptive, world-changing, or any other Silicon Valley catchphrase used as a euphemism for "get rich quick."

Of course, most of these startups aren't destined to become $100 billion IPOs. Absent from all-too-many of their elevator pitches was the foggiest outline of a sustainable way to make money. That means many won't be around long enough to be acquired, let alone strike it rich as publicly-traded companies.

Nevertheless, as new and as bootstrapped as many of the Demo presenters were, you ignore them at your own peril. They represent trends, product categories, and technologies that could one day have a material impact on your business, whether they're focusing on mobile, enterprise, cloud, or the consumer.

Several companies went after the problems related to the bring your own device trend. One company promised to make conference calling a high-fidelity experience (thank goodness). Another showed off a credit card that's actually a thin computer. A third promised the capability for you, your telecom guys, and your employees to configure and manage your office phone system from anywhere, anytime.

And there were of course products that were just cool--like the Segway of skateboards.

Take a look at the companies and products fighting to be tech's next big thing.