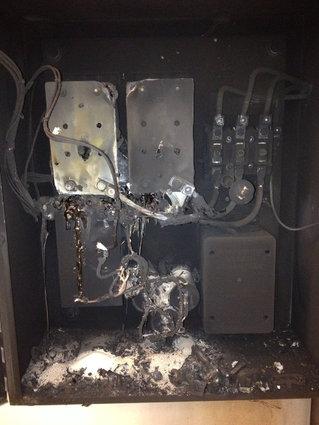 On the afternoon of Feb. 18, 2014, a day when the state of Iowa normally produced the state payroll, an electrical fire broke out in its primary data center. Far from anticipating such an incident, the IT staff had been preparing contingency plans for a blizzard that was predicted for that evening, recalled Robert von Wolffradt, CIO for the state of Iowa, in a blog posted March 25, 2014 on GovTech.com.

When the fire alarm sounded at 3 p.m., the data center lost power, smoke invaded the building, and the staff had to evacuate. The alarm triggered the data center's gas-powered FM-200 fire suppression system, and the fire was contained to the inside of a wall-mounted, transient voltage suppression box (pictured above). The unit, which controlled the flow of power into the data center, had overheated and melted down. The state's General Services team built a bypass, and power was restored several hours later.

With the power back on, doors could be opened, fans turned on and the building vented, although police and fire crews were reluctant to permit IT staffers back into the building. Three-and-a-half hours after the incident, state officials determined the data center was fit to re-enter.

Wolffradt had to decide whether $162 million in state payments to citizens and vendors, along with employees paychecks, could be processed. Working quickly, crews had the data center cleaned of residue, and IT staffers restored the storage attached network, firewalls and network core by 9 p.m. Turning them back on meant putting the equipment at risk without the transient surge suppression unit being replaced. Wolffradt decided to do so anyway, but he staffed a secondary data center as a precaution.

By 11 p.m. additional systems were back on line, including the service desk, and the Department of Transportation cameras needed for monitoring bridges and highways in the impending snowstorm.

Also restored: financial systems and virtualized applications. Additional systems were brought on line through the night, eliminating the prospect by morning that the secondary data center would have to take over state processing. "We leveraged our Homeland Securitys voice notification system to update agency directors and key staff twice during the event," recalled Wolffradt, who noted that rumors fly about wildly in the aftermath of a data center fire and the CIO must communicate frequently with other responsible parties. He had personally kept the governor and key state officials informed as events unfolded.

One lesson Wolffradt shared in his blog post: Diversify major enterprise systems from each other, such as putting email in a separate facility from payroll. Another: In a fire, General Services and Human Resources "are your best friends," and will help you get through it. One of the most difficult barriers to restoring operations was convincing police and fire crews that IT staff could re-enter the data center, he wrote. The building where the center was located housed a total of 1,000 state employees, most of whom waited longer than IT staffers for the all clear.

In no. 6, Outage by SUV, a commenter on Lew Moorman's blog post noted that a data center has about five minutes between the loss of its chillers and the start of equipment overheating. Does anyone know, is the margin really that narrow? I understand that computer equipment can operate at up to 100 degrees OK, but after that overheating starts to get dicey.
Reply  |  Post Message  |  Messages List  |  Start a Board
InformationWeek Is Getting an Upgrade!

Optimizing the CIO and CFO Relationship Mary E. Shacklett, Technology commentator and President of Transworld Data,  4/13/2021
White Papers
Protection Strategies for a Cyber-Resilient Organization
Intelligent Outcomes Are Key to Business Resilience
Are We Cyber-Resilient? The Key Question Every Organization Must Answer
Managed Threat Detection and Response
The InformationWeek 2021 State of ITOps and SecOps Report