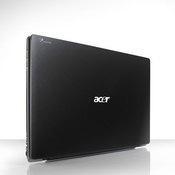 Acer has launched its top-of-the-line laptop, a desktop replacement model with an 18.4-inch high-definition screen and an Intel Core i7 quad-core processor.

The Aspire AS8943G led a variety of laptops Acer introduced Tuesday. The other systems range from thin-and-light to mainstream offerings.

The AS8943G is designed for people who use a laptop to create multimedia content or play the latest PC games. The system sports an aluminum cover, glossy and matte finishes and silver and black accents.

The laptop has an 18.4-inch edge-to-edge glass LED back-lit display with 1080p resolution, which is considered true high-definition. The machine includes an HDMI port for connecting to a digital TV and Dolby Home Theatre Audio.

Along with a Core i7 processor, the AS8943G can support up to 16 GB of system memory, but ships with either 4 GB or 8 GB. For graphics support, the laptop includes an ATI Mobility Radeon HD5850 GPU with 1 GB of dedicated video memory.

Other components include a 500 GB SATA hard drive, with an additional bay to add a second drive. The system comes with Wi-Fi and Bluetooth support, Gigabit Ethernet, a microphone and a 1.3 megapixel Webcam. A fingerprint reader is included for authentication.

For people looking for more portable systems, Acer introduced several thin-and-light systems that offer up to eight hours of battery life. The new Aspire Timeline X family includes four systems with displays of 11.6 inches, 13.3 inches, 14 inches and 15.6 inches. Each of the laptops are housed in black brushed aluminum, are less than an inch thick and range in weight from 3 to 5.5 pounds.

The systems can be configured with either an Intel Core i3 or Core i5 processor and up to 4 GB of DDR3 system memory. Available hard drives are either 320 GB or 500 GB. Other features include built-in Wi-Fi, Gigabit Ethernet, a microphone and a 1.3-megapixel Web.

Finally, Acer introduced two Aspire laptops that fit in between the Timeline X models and its top-of-the-line system. The AS5745 and AS7745 series have widescreen displays of 15.6 inches and 17.3 inches, respectively.

The AS5745 series is available with a Core i3, Core i5 or Core i7 processor. The systems can be configured with up to 16 GB of memory and a 500 GB hard drive and include a Nvidia GeForce GT 330M graphics processor. The laptops weigh 5.72 pounds with a six-cell battery and offer up to 3.5 hours of battery life.

The AS7745 series includes an ATI Mobility Radeon HD5650 graphics card, a Core i7 processor and 500 GB hard drive. The desktop replacements get 2.5 hours of battery life on a six-cell battery and weighs 7.1 pounds.

Prices for the latest Aspire systems start at $700.

Acer, the world's second largest PC maker in terms of shipments, has embarked on a refresh of its laptop lines this month. The company on Monday introduced four Aspire One laptops, Acer's lightest models. The systems have screen sizes of 10.1 inches or 11.6 inches and are powered by either an Athlon II Neo processor from Advanced Micro Devices or an Intel Atom N450 processor. Prices start at $298.