Through innovations like Prime and Prime Now, plus its AWS business, Amazon is not merely changing the nature of the consumer marketplace -- it's helping shape it.

7 Reasons The IoT Will Run On PaaS
(Click image for larger view and slideshow.)

Amazon is viewed as a highly successful online retail company that has tacked on a successful secondary business for cloud computing -- Amazon Web Services.

In truth, it's a lot more than that.

In Jeff Bezos's own description of the company, there's a third business -- Amazon Prime. If you didn't think of a group of customers called Prime fell under the umbrella of a separate business, remember that each Prime "member" pays $99 a year for the privilege of shopping on Amazon with more rights and privileges than non-Prime members.

Estimates of total membership vary, and Amazon doesn't disclose the exact number. However, if Consumer Intelligence Research Partners is correct, 54 million Prime members give Amazon over $5.3 billion a year for the privilege of spending an average $1,100 each at Amazon.com.

Those Prime customers represent nearly 60% of Amazon's total retail business, and they're paying Amazon for the privilege of doing business with its highly automated systems. If Wal-Mart, instead of a greeter, posts a fee collector at the front door asking for $99, what will happen to its business?

Furthermore, by cultivating this group, Amazon is capturing the customer most inclined to engage in online shopping and all kinds of online decision-making in the future. In my opinion, Amazon doesn't reveal the numbers because it doesn't want competitors to understand how valuable the Prime business is. It wants to capture as many of these customers as it can and pepper them with hard-to-resist digital services until they are fully engaged.

CEO Jeff Bezos filed a letter to shareholders April 5 as an 8-K form with the SEC. In it, he highlighted some of the ways Amazon is trying to become very sticky to Prime customers.

"We want Prime to be such a good value, you'd be irresponsible not to be a member," Bezos wrote. 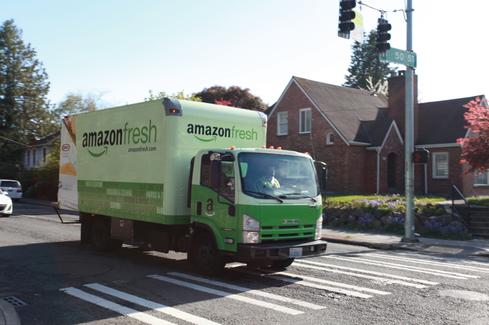 Prime customers get two-day free delivery on eligible items, which probably have to be pre-stocked in an Amazon distribution center for the company to make good on its two-day guarantee. The number of Prime items has grown from 1 million initially to 30 million today, Bezos wrote. Amazon will now also deliver on Sunday.

In other words, Amazon is telling customers they can find the item they want from the comfort of their homes and also get it quickly.

Prime customers also have the option of Prime Now, or one-hour delivery, on a subset of the items available on Amazon. That service that it launched "111 days after it was dreamed up," Bezos wrote. What's next? Custom-made hot coffee delivered to your desk by an aproned barista three minutes after you order?

Prime Video customers get content exclusively created for it.

Amazon's hit, The Man in the High Castle, shows what would have happened if the US had lost World War II. It's based on the Philip K. Dick novel. It became available Nov. 20, and four weeks later it was Prime Video's most-viewed show. Amazon is sponsoring more exclusive content from Spike Lee, Jill Soloway, and Jason Schwartzman. The company is now showing up as a winner in the Golden Globes and the Emmy awards.

Amazon has shown boldness in adding services like Prime Video, because it already hosted most of Netflix’s operations when that company started. AWS now hosts all of NetFlix's data center operations. Netflix was confident enough of its own business impetus not to pull back or threaten to go elsewhere, as far as we know. But the move shows that, as far as cultivating customer stickiness was concerned, Amazon was prepared to take risks.

It's likely to continue to do so.

That has to be a source of worry not for only brick-and-mortar stores, but also for anyone involved in the traditional service business. Amazon is an excellent platform from which to offer consumer services. It's already hosting online insurance startups. Why not healthcare, financial, and travel services? It would face major competitors already online in each area, but the power of the platform might confer advantages that focused startups could exploit.

It seems possible that Amazon could add a general-purpose Prime member package delivery service to what it's already doing if it chooses to, at least in select markets. It might be able to deliver faster than UPS or FedEx.

When it's finished offering Prime members many types of rapid-delivery services, Amazon may not be able to think of any other way of spending its money. Need fresh strawberries for the dinner party in an hour? The preparer could order them without stepping out of the house.

The Cloud Ties It Together

If the "computers are too complicated" crowd continues shopping at Kmart, Best Buy, and Wal-Mart, so be it. The most profitable part of the future consumer market is not going to look anything like the marketplace we know today, a hybrid of online and brick-and-mortar services.

In its pursuit of that future marketplace, Amazon is starting to define it in the process.

It's will be a digital-driven world, a combination of electronic selection and payment with high-speed physical delivery systems over a broad range of goods and services. Customers will not be part of casual trade walking in off the street, but members of a club to which they have great loyalty.

In this marketplace, Amazon will be an automated cloud platform from which many additional interconnected services can be launched. At the moment, it is just laying down the requirements of the future customer experience -- which only a few well-heeled competitors will be able to match.

Bezos said that Amazon is looking for a fourth billion-dollar business, after its Amazon Marketplace, the AWS cloud unit, and Amazon Prime. What makes anyone think he's going to stop at four?

Charles Babcock is an editor-at-large for InformationWeek and author of Management Strategies for the Cloud Revolution, a McGraw-Hill book. He is the former editor-in-chief of Digital News, former software editor of Computerworld and former technology editor of Interactive ... View Full Bio
We welcome your comments on this topic on our social media channels, or [contact us directly] with questions about the site.
Comment  |
Email This  |
Print  |
RSS
More Insights
Webcasts
People Are The Most Important Part of Autonomous SOC
Don't Miss This Cybersecurity Virtual Event
More Webcasts
White Papers
iPaaS Intrigue: A Faster Path to Digital Transformation
2021 SANS Cyber Threat Intelligence Survey
More White Papers
Reports
Are Unprotected Cloud Databases Leaking Your Data?
How IT Security Organizations are Attacking the Cybersecurity Problem
More Reports

Amazon already hosts 70,000 businesses that are making over $100,000 a year selling their wares on Amazon.com. It's providing selling tools in multiple languages around the world. It provides currency translation services. And it encourages entrepreneurs to become part of its online selling. In India, the 3-wheeled Amazon Chai Cart serves tea and lemon juice to small business owners, while teaching them how to sell online. Its reached 10,000 businesses, while serving 37,200 cups of tea.
Reply  |  Post Message  |  Messages List  |  Start a Board
Editors' Choice
Hot Topics