Asana's task management tool, derived from software to keep Facebook engineers organized, adds an inbox for getting things done.
David F Carr
Editor, InformationWeek Government/Healthcare
June 27, 2012
Rosenstein's skepticism about social software echoes a message that came across in a May New York Times article that appeared in the runup to Facebook's IPO.

"The first time I looked at Yammer, I thought I was on Facebook," Asana co-founder Moskovitz told the Times. "Work is not a social network, with serendipitous communications and photo collections. Work is about managing tasks and responding to things quickly."

I had a chance to ask Yammer co-founder Adam Pisoni for a response a few weeks ago. "What I think Asana missed was a critical point about where they started--with a system for task management used internally at Facebook," Pisoni said. "What Facebook already had was a social platform they used internally."

Facebook operates a private version of its social software with groups and profiles and activity feeds, plus integration with products like Rypple's employee performance management tools, which Facebook helped design. Pisoni's point was that base level of online social interaction between coworkers was never missing at Facebook the way it is in other companies. "I think they [the Asana co-founders] kind of missed the internal communications they already had in place," he said.

"I don't want to knock them; I think they're bright guys," Pisoni continued. "But they need to watch out for the second company phenomenon, which is what we see when people spin off from a successful company and they think it's easy. It's not easy." 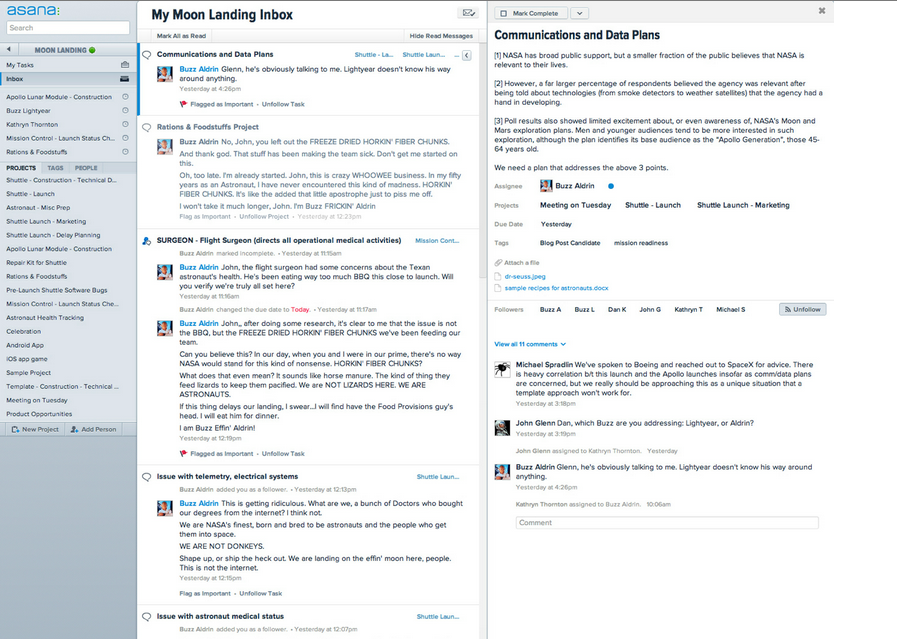 Asana Inbox for the Moon landing