Awareness beats presence, Avaya says, outlining its vision for next generation collaboration tools at Enterprise Connect. Think technology that understands who's most relevant, based on your current work, not just who's online.
David F Carr
Editor, InformationWeek Government/Healthcare
March 27, 2012 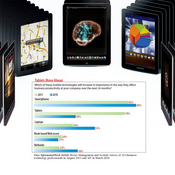 As part of a keynote speech at UBM's Enterprise Connect conference, Avaya's Brett Shockley argued that the presence part of unified communications--the status indicator lights next to a name or avatar that indicate whether we're online or on the phone--is falling down on the job of making our work lives more efficient. "Presence is mostly about making it easier for people to interrupt you," said Shockley, Avaya's senior VP and general manager for applications and emerging technologies.

Avaya thinks it has something better, which it is terming "awareness" rather than "presence." Awareness technologies will pay attention not just to where we are and whether we are online but what we are doing and what people and content we need to connect with to get that work done, he said. Like an automated equivalent of a good executive assistant, Avaya will get us all the things we need without us having to ask for them, he said. The awareness software will get this context by parsing and analyzing our email and other communications.

This technology will come to market this summer in updates to the Avaya Flare experience, which includes the Flare desktop device as well as Flare for Windows and Flare for iPad. It will also be delivered in other forms, such as enhanced conference calling.

This single number access will be particularly handy for the overloaded executive trying to join a conference call while driving down the highway, without crashing into a bridge abutment in the process, Shockley said.

"This is patented Avaya Labs technology that is tracking all the same things an admin would track if you had executive admin--who you are communicating with, which documents are associated with which people as well as your calendar and events on that calendar. It monitors voice calls, emails, and text message in an attempt to predict at any moment in time who are the most relevant people and which are the most relevant documents, conversations, or events," Shockley said.

In an onstage demo of how awareness works in the context of the Flare software, Shockley showed how the software could help him more quickly pull together all the people required for an online meeting by using a smart filter on his contact list. Starting with a display of his most recent and frequent contacts, he was able to drag and drop contact cards showing each individual's photo into the participants list, and as he made selections the list was further narrowed as the system inferred his intent by analyzing the connections between those people to identify the common project they were all working on. In the process, it also pulled in documents related to that project (in the demo, the project was organizing a conference dinner).

"By creating an extraordinary user experience, we're helping you save the first 10 minutes out of every hour," meaning the time wasted pulling together the right people and information required for the meeting to actually get started, Shockley said.

AvayaLive Connect is a bundle of cloud-hosted communications services that a business can procure and provision online within a matter of minutes by entering a credit card number and a list of user names and email addresses. Ordering a desk phone to go with that new account is just a checkbox on the form, or users can access the service through a software download. "We're reaching out to smaller customers than we've reached out to in recent times--the term we're using is 'entrepreneurial,' " Shockley said. Aimed at businesses with 20 or fewer employees, the service is currently in trials with general availability planned for this summer.