The tenor at AWS re:Invent paints a picture of more companies tossing out mainframes to take advantage of the cloud.

At the AWS re:Invent conference this week in Las Vegas, Amazon Web Services CEO Andy Jassy laid out his philosophy for what it takes for organizations to modernize — and the answer was surprisingly human.

“The first step in transformation is not technical,” he said. “It’s very much about leadership. It’s about making sure you have senior-level alignment.” Jassy said such leadership, in essence, could drive an aggressive top-down effort that compels the organization to advance on its plans.

Fear of change seems to be abating, according to Jassy, as he said many companies have found it relatively easy to move workloads to the cloud. Furthermore, he said that once leadership commits to transformation, their developer staff is often eager to follow and put those plans into action.

There are strategic choices organizations obviously must make about what they will move forward with during transformation, Jassy said. Companies might compare their on-premise infrastructure to the cloud and then weigh the costs of maintaining legacy systems versus the potential benefits of modernizing. “You have to decide what you will take with and what you leave behind,” Jassy said. 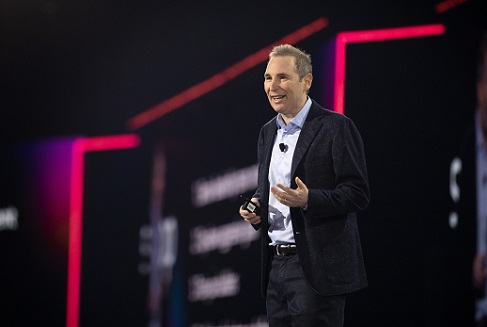 That can include parting ways with longtime mainstays of the operation, a move he said more organizations are comfortable with. “Companies are trying to move away from mainframes as quickly as they can,” Jassy said. “They are expensive and slow and complicated. Hardly anybody has mainframe skills anymore.”

The many legacies of old infrastructure can also slow down organizations’ efforts to evolve. Jassy cited a case where an enterprise undergoing transformation needed credentials to decompile something but could not find anyone in the company with those credentials. It was eventually revealed that the only person who had the credentials retired 10 years prior and moved out of state. The enterprise found the retiree and resolved the issue, but Jassy warned that not every tale of transformation has such happy endings.

Some organizations may move away from mainframes by tapping into microservices, Jassy said, and relaunching. He was unambiguous in his advocacy for migration from “old guard,” commercial-grade relational databases. “People are trying to move away from Oracle SQL server because they are expensive, proprietary, mean high amounts of lock in, and the terms are downright punitive,” he said.

There are alternatives to database servers that organizations are looking to, Jassy said, including open engines such as MySQL or Postgres. Despite the potential benefits they offer, Jassy said it can be hard for such open engines to deliver the performance of commercial-grade relational databases. He said AWS developed the Aurora relational database service in response to the need for flexibility while maintaining robust power. Jassy said Aurora is used by organizations such as Bristol-Myers Squibb, Fannie Mae, AstraZeneca, and Nasdaq.

During his keynote, Jassy was joined on stage by David Solomon, chairman and CEO of Goldman Sachs, who spoke about how cloud technology has changed the investment bank. Solomon said the financial world continues to become increasingly complex and engineers at Goldman Sachs are trying to make it simpler and more intuitive. “Everything we are building is trying to make finance work better,” he said.

That effort, Solomon said, can be seen with the launch of the Apple Card, of which Goldman is the issuer. Development of the Apple Card was done in collaboration with Apple, Mastercard, and AWS. Solomon said it would not have made sense for Goldman Sachs to get into the Apple Card business if it had to maintain data centers. “The only reason we were able to deliver these capabilities digitally and at scale was because of cloud technology,” he said.

Goldman Sachs is looking to put cloud technology to work in other places, Solomon said, pointing to areas such as transactions and payment processing that can benefit from new efficiencies. “Right now, this space is dominated by . . . manual processes and slow turnaround times,” he said. In 2020, Goldman Sachs plans to launch a transaction banking service, he said, a digital platform to help organizations manage cash, built entirely on a cloud-based stack provided by AWS.

Joao-Pierre S. Ruth has spent his career immersed in business and technology journalism first covering local industries in New Jersey, later as the New York editor for Xconomy delving into the city's tech startup community, and then as a freelancer for such outlets as ... View Full Bio
We welcome your comments on this topic on our social media channels, or [contact us directly] with questions about the site.
Comment  |
Email This  |
Print  |
RSS
More Insights
Webcasts
Monitoring Critical Cloud Workloads
The Experts Guide to Ransomware Response
More Webcasts
White Papers
Guide to Enabling 5G Deployments
Top Serverless Security Risks and How to Mitigate
More White Papers
Reports
Intelligent Outcomes Are Key to Business Resilience
Trustwave Global Security Report
More Reports