Responding to a recent similar claim for the Amazon Kindle, Barnes & Noble said its e-reader was its best-selling product in nearly 40 years.
Antone Gonsalves
Contributor
December 30, 2010 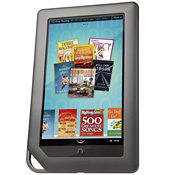 Not to be outdone by rival Amazon.com, Barnes & Noble says the Nook electronic reader is its best-selling item in the bookseller's nearly 40-year history.

B&N announced the milestone Thursday, three days after Amazon proclaimed the Kindle its best-selling product in the 15 years the online retailer has been in business. Both devices are available for less than $150 and target mostly avid readers who prefer to carry their books and periodicals in a single, lightweight device.

Most dedicated readers use E Ink's monochromatic digital paper display, which is easier on a reader's eyes because it does not use a backlight like a laptop's LCD color display. B&N introduced an LCD-based Nook in October to add color capabilities to the line and to differentiate the product from Amazon's Kindle. B&N said Thursday that the color Nook was its best-selling gift of the holiday season.

Amazon.com announced in July that it had reached a "tipping point" in which it was now selling more digital books than hardcover books.

Analysts believe Amazon.com is the leader in the e-reader market. The online retailer and B&N do not release sales numbers for their respective products, choosing to describe sales momentum through milestones and vague references to "millions" of units sold. The vendors sell their e-readers online, as well as through other retailers, including Best Buy and Wal-Mart Stores.