The former eReader app has been rebranded with the same name as the bookseller's electronic reader device and includes in-app content rating and personalization options.
Antone Gonsalves
Contributor
August 17, 2010 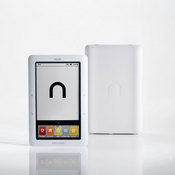 B&N on Tuesday also renamed the app across all platforms to Nook, adopting the same name the bookseller uses for its e-reader device. B&N had initially called the app eReader.

In the Nook for iPad, B&N has added in-app content rating. With the latest iPhone app, people can personalize the interface by choosing from professionally designed themes or create their own by picking colors for fonts, backgrounds or link. Users also have the option to control screen brightness to make reading more comfortable.

Other new options within the iPhone app include line spacing, font style and sizes and adjust the spacing of words and letters. People can also opt to use publishers' original settings in viewing e-books.

B&N launched the upgrade for Apple's devices a month after releasing the Nook for smartphones based on Google's Android operating system. The software works with Android OS 1.6 devices and higher. The Android app has many of the customization features of the latest software.

All of B&N's mobile applications offer the ability to lend select e-books to other users of the bookseller's software. Nook users can share e-books for up to two weeks.

In addition, the Nook app can be synchronized across multiple devices, so a person can always have access to their library, as well as the last page read and bookmarks.

Along with the latest mobile apps, B&N is expected to release this summer Nookstudy, an online software study platform for higher education.

The company sells two e-book readers, the Nook 3G for $199 and the Nook Wi-Fi for $149. The devices compete with Amazon's Kindle, the Sony eReader and other products.

The number of e-books sold is growing at a much faster rate than physical books, making it difficult for companies like B&N and rival Borders to operate bricks-and-mortar stores. The shift toward digital books has contributed to B&N announcing this month that it is considering a possible sale of the company.

B&N, the largest U.S. bookstore chain with 700 stores, has seen its stock decline over the last year as digital books encroach on its store business.