HTML-5 based embedding puts Box's full file sharing capabilities into websites and other apps. Ten partners have signed on: NetSuite, SugarCRM launch this week, Jive's in the works.
David F Carr
Editor, InformationWeek Government/Healthcare
October 09, 2012
10 Best Business Tools In Google+
(click image for larger view and for slideshow)
Customers and partners of the Box file sharing and document collaboration service will be able to embed the full Box experience in other websites and applications using technology announced Tuesday.

Box highlighted 10 application partners who will take advantage of the new Box Embed feature, with NetSuite and SugarCRM delivering it this week and Jive Software promising to make it part of a broader engineering and integration partnership. The announcements came at the BoxWorks user conference in San Francisco, and Jive's CEO thought the partnership important enough that he made an appearance there before heading on to his own company's JiveWorld show in Las Vegas.

Box describes Box Embed as "a new HTML5-based embeddable framework that delivers Box's entire suite of collaboration and management features including file preview, comments, tasks, and search into partner and customer applications." Available this week at no cost for all Box customers, Box Embed adds a button to the Box user interface that users can click to obtain a code snippet for embedding a file folder in a Web blog or document. In other words, it works much the same as getting the YouTube embed code to add to a blog post. Other cloud and Web-based applications can embed access to Box files and folders in their own user interfaces. For example, in NetSuite, Box appears as a tab at the bottom of an account record, allowing users to specify a folder that should be associated with that account.

The ability to display a listing of files from Box within another application is not entirely new. For example, the Box for Salesforce.com integration, available through the AppExchange, associates files with a customer record. Previously, clicking on a link to a document would take the user out of the application where they started and into the Box user interface. Now, Box is making a version of its user interface embeddable to the extent that users can browse, search, preview, and download documents without ever leaving the parent application.

"We're making it far simpler for integration to happen at a tight level," Whitney Bouck, general manager of enterprise at Box, said in an interview.

In addition to supporting Box Embed, Jive is committing to joint engineering work on improving the API connections between the two products, making it possible for users to upload files to and download files from Box within the Jive user interface, sync documents between the platforms, and search content across both systems. That integration will be available in the first quarter of 2013, Jive said. Application embedding is also central to the latest incarnation of the Jive enterprise social network. 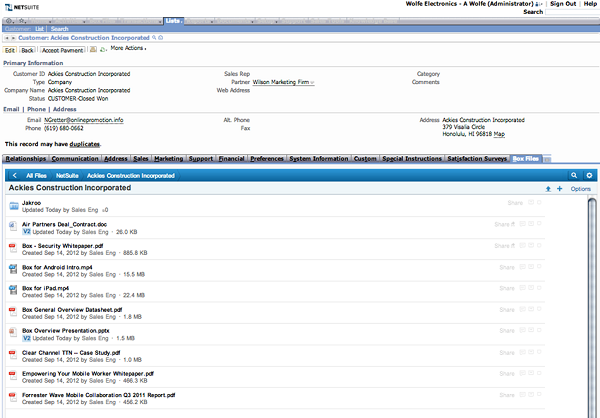 An example of Box files embedded in a NetSuite screen.

Bouck said it will also make sense for Box to continue to promote its integration with Salesforce.com, despite that company's introduction of ChatterBox as its own solution for file sharing in the cloud. "It is worthwhile, just as it's worthwhile for us to integrate with Documentum and SharePoint, even though there's overlap," she said. Many other vendors are treating file and document sharing as one element of a broader stack of technologies, whereas Box is creating a platform unto itself that can be integrated with multiple technology stacks, allowing documents to be shared across applications, she said.

ChatterBox "is really additive to what we've offered," Bouck said.

Prior to the conference, Box also introduced a series of security and administration upgrades.