Chatter will be embedded throughout Eloqua's marketing automation suite by the end of the year.
David F Carr
Editor, InformationWeek Government/Healthcare
July 12, 2012

Questions About Microsoft's Acquisition of Yammer
(click image for larger view and for slideshow)
Salesforce.com's Chatter is about to become almost as integral to Eloqua's marketing automation tools as it is to Salesforce's own CRM suite.

Eloqua Thursday announced Eloqua in Chatter, an embedded version of the Chatter stream that will present Chatter conversations that are contextually relevant to the marketing campaign an Eloqua user is working with, much as Salesforce CRM users can see Chatter streams that are relevant to a customer or a sales opportunity. A beta test of the software will begin in September, with general availability slated for the fourth quarter.

[ Do you have the right people on your collaboration team? Read Social's Enterprise Value: Lessons From Random House. ]

"All of our marketing users will get access to Chatter, even if they are not Salesforce.com customers today," Eloqua product manager Rob Bois said in an interview. However, part of the attraction is that the majority of Eloqua customers already are Salesforce.com customers. Joint customers of the two cloud software firms use Eloqua to plan and manage marketing campaigns, including email and social media campaigns, which generate the interest that brings in the sales leads. When a potential customer responds to an email and fills in a form asking for more information, Eloqua records the information and shares it with Salesforce.com.

That level of integration between marketing and CRM systems has existed for a long time, but it's really limited to "connecting the plumbing" by piping data from one system to the other, Bois said. "It's really just a hand-off, not an aligned process." Chatter integration is about connecting the people in the marketing and sales organizations, so they can coordinate more closely.

In a demo, Bois and fellow product manager Egan Cheung showed how the Chatter stream is embedded in the Eloqua home screen. When the user opens a particular campaign, the Chatter feed narrows to just the posts relevant to that campaign. A typical marketing-to-sales interaction might include asking a healthcare products salesperson to review an email campaign that marketing has prepared. The salesperson, being closer to the market, provides feedback, such as, "A doctor would probably use the word 'patients' rather than 'customers.'" As a result, the email copy is revised, the response is better than it would have been otherwise, money flows in, and everyone's happy. That's the idea, anyway.

Bois said getting marketing and sales talking more is important because a large body of research shows it leads to better financial results. Yet according to a recent Forrester Research report, only 8% of companies report having achieved tight alignment between marketing and sales.

Chatter functionality is being embedded directly into the user interface of all of Eloqua's products and will be available to all marketing users. Eloqua also has a secondary category of sales users, who will not get access to Chatter through Eloqua, although those who are Salesforce.com users will be able to participate in the same conversations from the tool where they spend more of their time anyway. 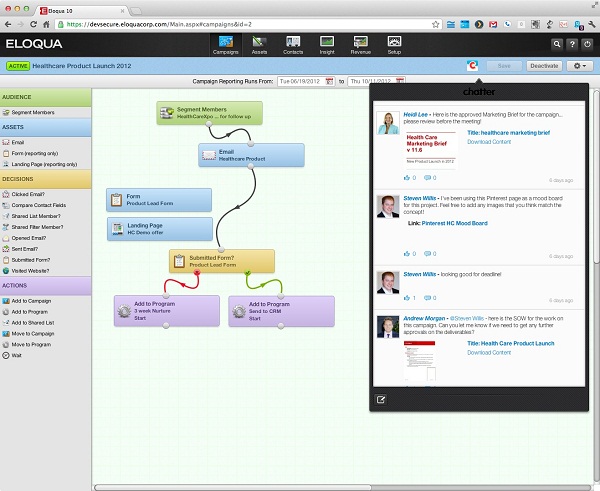 Chatter in Eloqua will display a stream of comments related to a specific campaign.