Cloud's Thorniest Question: Does It Pay Off?

Many CIOs have their doubts. In this series, we examine why cloud costs remain so hard to judge.
Charles Babcock
Editor at Large, Cloud
May 30, 2012
Can Cloud Go Big?

Yet the examples here also are fairly small-scale operations. It's when companies get larger that they start thinking their own dedicated data centers can replicate the efficiency and economies of scale of cloud providers for ongoing operations, so they can then harvest the savings from Moore's Law-driven hardware improvements.

Zynga is one example of that shift. The online game-maker launched its business on Amazon Web Services, and until recently ran 80% of its games (FarmVille, Words With Friends, Mafia Wars) on AWS. Now that those games have reached huge scale and more predictable volumes, Zynga plans to run more like 80% of its games on dedicated servers, run out of third-party data centers. It'll keep using AWS, but only for the bursty and unpredictable capacity. Zynga's now treating AWS like a premium-priced service for a specialty product--on-demand capacity--not long-term capacity. Of course, Zynga's not a typical enterprise IT operation, since it essentially runs one Web app on massive scale, not the mix of software most businesses face.

Lynden Tennison, CIO of $19.6 billion railroad company Union Pacific, runs a more traditional business but sees cloud infrastructure much the same way. The railroad business has fairly predictable business volumes, so UP doesn't see a lot of spikes in computing demand. It benchmarks its costs against cloud service prices and has found in-house more affordable. "I've always thought the cloud made some sense for midtier companies to embrace," Tennison says.

But even for big-company CIOs who think that way today, there are at least two big factors for them to keep an eye on.

The biggest one is competition. Amazon figured out a sweet business model if it can get long-term customers: It buys hardware and gets companies to pay for it over and over. But competition, which looks to be growing, will drive prices down. For example, Hewlett-Packard could prove to be a major force now that it has entered the cloud infrastructure market. 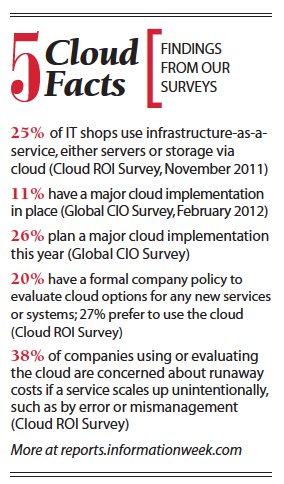 The other factor to watch is capability. Will conventional data center operators continue to match the capabilities offered by cloud vendors, which spend most of their time obsessing about hyperefficient operations?

Consider the degree to which cloud vendors automate operations. The typical enterprise has used virtualization to reduce its administrator-to-server ratio to as low as 1-to-35 or even 1-to-50. Microsoft's Chicago-area cloud data center has achieved a ratio of 1-to-6,000.

Energy use will be another test. Data centers have power usage effectiveness, or PUE, ratings that tell how efficiently they use electricity. The average enterprise data center uses twice the amount of electricity that's actually needed to do the computing--a typical PUE rating of 1.92 to 2.0. That extra power is consumed by lighting, cooling, and other systems.

Cloud data centers also are big users of open source software--Linux server operating system, Apache Web server, KVM, and Xen virtualization software--giving them a less expensive software infrastructure than the typical enterprise data center. Cloud centers pack in servers optimized--sometimes custom-built--for virtualization, then divide them up for multitenant use, reducing costs further. Cloud vendors spend the time to develop expertise in areas such as lower-cost virtualization software and energy-sipping server hardware because those efforts can scale even small savings across a massive installed base.

If cloud vendors can keep wringing out these cost savings of scale and efficiency, enterprise IT may find it increasingly difficult to match that performance. And then it just becomes a question of whether increased competition forces those cloud vendors to pass along their cost savings to customers.

Exactly when that magic mix of competition and capability makes cloud infrastructure prices irresistible to enterprise IT organizations isn't clear. For now, convenience and speed are the big drivers, but the pull of cloud efficiencies and savings will gain power over the next decade.

Our full report on IT spending is available free with registration.

This report has data on the spending plans and budget impacts that IT pros expect from 16 tech projects, including public cloud, mobile device management, analytics and more.
Get This And All Our Reports
See Also:
Cloud Pricing: Amazon, Microsoft Keep Cutting
IT Leadership & the Strategic CIO