Dell's plan to acquire EMC for $67 billion reflects the major disruptions taking place in enterprise IT as businesses increasingly shift toward cloud computing. Here's what IT leaders need to know about the deal.

7 Microsoft Improvements We Need To See
(Click image for larger view and slideshow.)

Dell's planned acquisition of cloud computing and storage company EMC for $67 billion is the largest technology industry acquisition to date. But the deal is significant beyond its monetary value. It underscores the turmoil among traditional IT vendors as enterprise computing moves from hardware and software products to subscription-based cloud services.

The combined company will be privately held, freeing it from the regulatory scrutiny and earnings pressure faced by public companies. VMware, mostly owned by EMC, will remain a separate publicly traded company.

On a conference call for the media, Joe Tucci, CEO of EMC, acknowledged that the IT industry is going through a transformation, and the traditional IT business is being disrupted. Yet, he stressed there are opportunities for the combined companies, pointing to the growing amount of business telemetry -- the product of industrial sensors, devices, and apps -- that requires storage, processing, and analysis.

"This combination makes great sense because of the obvious ways that our businesses complement each other and allow us to grow," said Michael Dell, CEO of Dell, who will oversee the combined company. 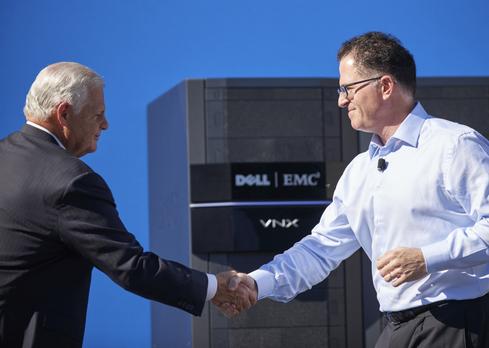 The union of Dell and EMC could pose a problem for HP, because it magnifies a competitor and leaves CEO Meg Whitman with one less potential buyer for HP assets. In a memo to employees, Whitman characterized the deal as a validation of HP's approach, even as she suggested debt, management obstacles, and customer confusion will hinder the integration of Dell and EMC.

Glenn O'Donnell, VP and research director at Forrester Research, said in a phone interview that the deal could work, because the two companies fit together well. Yet he foresees challenges.

"The legacy vendors are under threat, and some are going to disappear," said O'Donnell. "If they stick with the same business model, they're going to be in trouble, regardless of how they work this out with EMC."

Computer sales have been declining for several years, and demand for enterprise storage, particularly from EMC, has been soft.

"These are two companies that have been somewhat declining in their core business," said O'Donnell. "Does it make sense to put one plus one together and get less than two?"

O'Donnell said whether the deal ultimately ends up working will depend on its execution. "They're probably going to lose some money for a while."

But, as a privately held firm, Dell-EMC will be able to realign its operations without a backlash from investors. To rebuild, O'Donnell explained, the company will have to retrench, make expensive investments, and see earnings suffer for several quarters. "If you did that as a public company, Wall Street would crucify you."

Michael Dell sees an advantage in offering a full array of IT products and services to business customers, rather than products that need to be connected to other vendors' systems. "Customers actually don't want to integrate things themselves," he said, pointing to software-defined data centers and services related to mobility, security, and cloud infrastructure as areas of potential growth.

O'Donnell echoed that view. "That integrated offering is more important than it has ever been," he said. "EMC can no longer be just a storage company."

Thomas Claburn has been writing about business and technology since 1996, for publications such as New Architect, PC Computing, InformationWeek, Salon, Wired, and Ziff Davis Smart Business. Before that, he worked in film and television, having earned a not particularly useful ... View Full Bio
We welcome your comments on this topic on our social media channels, or [contact us directly] with questions about the site.
Comment  |
Email This  |
Print  |
RSS
More Insights
Webcasts
The Failures of Static DLP and How to Protect Against Tomorrow's Email Breaches
5 Steps to Solving Modern Scalability Problems
More Webcasts
White Papers
How to Prioritize Risk Across the Cyberattack Surface
The Insider's Guide to IP Geolocation Data During COVID-19
More White Papers
Reports
How Data Breaches Affect the Enterprise (2020)
Building an Effective Cybersecurity Incident Response Team
More Reports

Yikes! THat could be a problem. That kind of debt can be crippling, especially if they can't rebuild quickly. That's the problem with legacy companies. Sometimes if you can't change fast enough you're sunk. It will be interesting to see what comes from this and if Dell can keep it's head above water.
Reply  |  Post Message  |  Messages List  |  Start a Board

The Dell-EMC deal is being ranked as the largest in tech history.

The second largest was AOL-Time Warner.

There are also reports that Dell tried unsucessfully to shop its PC unit around. That doesn't bode well for legacy firms.
Reply  |  Post Message  |  Messages List  |  Start a Board

Meg Whitman, H-P's CEO, told her employees that Dell will need 2.5 billion a year just for the interest they must pay.

Seems she has worked out the numbers here too.
Reply  |  Post Message  |  Messages List  |  Start a Board
Editors' Choice
Hot Topics

10 IT Trends to Watch for in 2021 Cynthia Harvey, Freelance Journalist, InformationWeek,  12/22/2020
White Papers
How to Prioritize Risk Across the Cyberattack Surface
Passwordless: The Future of Authentication
How to Compete in Financial Services IT
Transforming the Corporate WAN: Enterprise Network Insights
ROI Study: Economic Validation Report of the Anomali Threat Intelligence Platform