With administrative, integration, and security enhancements, Dropbox for Business is aiming for greater corporate acceptance.

Windows 10: Sneak A Peek At Your Future PC
(Click image for larger view and slideshow.)

Amid the continuing commoditization of cloud-based storage, on Thursday Dropbox added several features to its enterprise storage offering, Dropbox for Business.

Rob Baesman, head of product for Dropbox for Business, announced new administration, integration, and security capabilities in a blog post.

"Our goal is to make Dropbox for Business the best place to get work done, and that includes giving IT the administrative controls and deployment capabilities they need," said Baseman.

Dropbox has also introduced an enterprise installer to automate the remote deployment of Dropbox for Business on Windows desktop computers.

New shared folder capabilities in the Dropbox for Business API make integrating Dropbox storage with other services easier. The company said that several data migration and data loss prevention providers, including Adallom, CloudLock, Elastica, Mover, Netskope, and SkySync, have begun incorporating these capabilities in their products.

Dropbox for Business is also gaining support for Active Directory, the identity management service favored by many companies. Dropbox says it has provided beta access to its Active Directory connector to select clients.

With regard to security, Dropbox now boasts ISO 27018 certification, a privacy and data protection standard. The company has also simplified the process of requiring two-step verification to protect user accounts.

The company's goal is also to attract more paying customers. With so much storage available for so little -- Box, Google, and Microsoft all offer unlimited storage to paying business storage customers -- Dropbox (like its competitors) needs revenue to support its generosity.

The perils of all-you-can-eat storage are evident with Box, which reported a loss of $167 million for its fiscal 2015, with revenue of $216 million. Dropbox isn't yet a public company, but it still has bills to pay and investors to please. 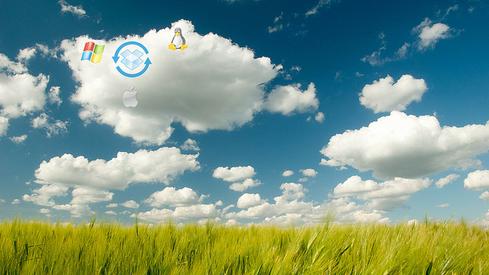 As of June, Dropbox said it has 300 million registered users. That's a respectable number considering that Google last September said it had 240 million active users of Google Drive (and possibly more registered but inactive users).

The more significant number for the company is its 100,000 Dropbox for Business customers, which compares favorably -- in quantity at least -- to Box's 45,000 enterprise customers and 35 million registered users.

T.J. Keitt, an analyst with Forrester Research, said in a phone interview that while Box is further along in its effort to create an enterprise content management platform, Dropbox should be viewed differently than companies that have focused on business applications for the cloud storage, such as Box, Google, and Microsoft.

"Dropbox's attack angle is different," said Keitt. "It's got a pretty nice advantage as a well-received consumer technology."

Keitt likened Dropbox to the iPhone in terms of the way its popularity has eased its entry into the corporate world. User affinity for the service, however, isn't enough to make IT departments swoon. "There's still a lot of work for them to do," said Keitt.

Thomas Claburn has been writing about business and technology since 1996, for publications such as New Architect, PC Computing, InformationWeek, Salon, Wired, and Ziff Davis Smart Business. Before that, he worked in film and television, having earned a not particularly useful ... View Full Bio
We welcome your comments on this topic on our social media channels, or [contact us directly] with questions about the site.
Comment  |
Email This  |
Print  |
RSS
More Insights
Webcasts
Disaster Recovery/Business Continuity in the New Normal
4 Practical Tips for Building a Data Lake
More Webcasts
White Papers
Best Practices Guide to Containers/ Kubernetes Security
AWS Lambda Security Best Practices
More White Papers
Reports
2021 Digital Transformation Report
Dark Reading Report: Battle for the Endpoint
More Reports