Google wants to see storage technology evolve to meet the demands of cloud computing by adopting designs that are more affordable, more error prone, and better suited to collective operation.

In a research paper published Tuesday, Feb. 23, for the 2016 USENIX conference File and Storage Technologies (FAST 2016), Eric Brewer, VP of infrastructure at Google, calls for industry and academia to work together to adapt hard disk drives to current data center needs.

The problem, Brewer explains in a blog post, is that current "nearline enterprise" disks -- spinning hard disk drives as opposed to more expensive solid state drives -- are designed for traditional servers rather than large scale data centers supporting cloud computing. This is the fastest growing market, says Brewer, and it's likely to represent the majority of the market in the near future.

YouTube demonstrates why Google sees the need for change. YouTube users, according to Brewer, upload more than 400 hours of video every minute. With video requiring about 1 gigabyte of storage space per hour, that translates to more than a petabyte (1 million gigabytes) of new storage every day. And Brewer expects the rate of video ingestion to grow 10x every five years. 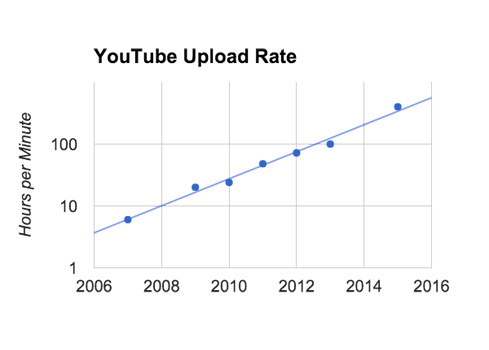 How then to accommodate our insatiable hunger for cat videos? Brewer argues that hard disks should be optimized to function as collections of disks rather than discrete devices associated with a single server. "This shift has a range of interesting consequences, including the counter-intuitive goal of having disks that are actually a little more likely to lose data, as we already have to have that data somewhere else anyway," Brewer says.

Such hardware wouldn't actually lose data. It would be designed to facilitate the management disk errors at a higher level, through error correction and replication across multiple, coordinated disks. The result would be more affordable data center storage hardware. Individually, the disks would be more prone to errors. But collectively, they'd keep data secure while allowing improvements in capacity and performance.

The research paper, Disks for Data Centers, co-authored by Brewer, Lawrence Ying, Lawrence Greenfield, Robert Cypher, and Theodore T'so, also asserts that security must be improved as new use cases for storage are considered. It argues that security must be hardened to prevent unauthorized firmware changes and that encryption -- currently the cause of a major legal battle between Apple and the US government -- must be adapted to collections of disks through support for multiple keys. This would make it easier to secure data from different customers in shared disk space.

Thomas Claburn has been writing about business and technology since 1996, for publications such as New Architect, PC Computing, InformationWeek, Salon, Wired, and Ziff Davis Smart Business. Before that, he worked in film and television, having earned a not particularly useful ... View Full Bio
We welcome your comments on this topic on our social media channels, or [contact us directly] with questions about the site.
Comment  |
Email This  |
Print  |
RSS
More Insights
Webcasts
Protecting Your Enterprise's Intellectual Property
How Elite Analyst Teams are Transforming Security with Cyber Reconnaissance
More Webcasts
White Papers
From MFA to Zero Trust
Research Report: Evaluating Your Organization's Cybersecurity Readiness
More White Papers
Reports
Annual Global State of the WAN
The ROI Of SD-WAN: Not Just A Numbers Game
More Reports

It's not that Google literally wants less reliable disks. It wants more cost effective ones. Let cloud software do for disk drives what it's done for servers. The burden of continuous operation lies in the software, not the hardware. When a device fails, there's already a backup copy of the data and a new copy is created on a healthy device immediately after failure. This allows the use of more cost-efficient hardware. It doesn't have to be non-stop, continuous operations for the longest time manufacturable by man. It can have a built in, shorter life without harm to the overall system.
Reply  |  Post Message  |  Messages List  |  Start a Board

Accept the fact that there is a requirement of storage space..

Google is foreseeing something here.. May be they came to know SSD's are not going to become less expensive anytime soon. Or else the most appropriate choice would have been SSD's.

When you have a better technology; why do they want to experiment with traditional hard drive's again..
Reply  |  Post Message  |  Messages List  |  Start a Board

"The industry is relatively good at improving GB/$ [gigabytes per dollar], but less so at IOPS/GB [input-output-per-second per gigabyte]"

A better approach than redesigning hard drives is to add the right software intelligence to fully leverage what we already have. DataCore just proved this to the world again.

- Did this at 99.95 microseconds average response time at 100% load (never been done before)

What you are saying-Wrt Technology Industry having different parameters and benchmarks (from the Aviation Industry) made sense in a Time of Ample Liquidity & Cheap VC Cash.

Unfortunately today that time is over(atleast for the next 2 years or so)-This is the major factor which is causing all the belt-tightening and Layoffs one sees in Silicon Valley currently.

Going ahead,I forsee the pain getting worse atleast for the next year or so as the Global Recession (starting from China but enveloping most of the West as well)well and truly bites.

In that period;the chances of any Large Industry(like the Semiconductor Industry)pulling off something big like this are next to Zero.

Every year there are thousands of research papers released in the Technology Industry;how many of those are turned into real applications?That number is all set to decline considerably going ahead atleast for those applications which require Huge Gobs of cash.

"Look at Manufacturing Goliaths like Boeing and Airbus for instance.Before they even think about building a single new plane(like the Airbus A320neo or Boeing 737max) they book thousands of orders just to break-even"

@Ashu001: I think it's not fair to compare the aviation industry with technology. Technology is moving several times faster than any other industry and it has to operate at this pace. The tech giants of this world cannot afford to give the slack that perhaps Airline manufacturers can.
Reply  |  Post Message  |  Messages List  |  Start a Board

Its not always that simple.

We are currently living in a world which places a Greater premium on RoC(Return of Capital) rather than RoI(Return on Investment/Capital).

In such a world,companies have to first demonstrate that they can Profitably setup and run a Business successfully before they get fresh funding-Yes its true even in the much exalted VC-funded space as well now).

Which is why its so important(unless Google choses to underwrite part of the Risk for these companies for retooling their Manufacturing) to see atleast some traction/orders up front.

Look at Manufacturing Goliaths like Boeing and Airbus for instance.Before they even think about building a single new plane(like the Airbus A320neo or Boeing 737max) they book thousands of orders just to break-even.

Similar situation also arises in the HDD space(Just that these guys have to sell Millions of HDDs first).

Good points raised by you here.

I have no doubt this is precisely how Storage will expand going ahead.

Anything more/less could be asking for too much trouble currently.
Reply  |  Post Message  |  Messages List  |  Start a Board

Given the pace at which the storage capacity needs to be expanded, I believe the best type of architecture would be one which gives a lot of flexibility and the room to scale as and when needed. The additional storage can be added at the same pace at which the demand goes up and this would prove to be cost effective with little wastage of space. The architecture needs to support easy addition of capacity without having a compromise on the performance.
Reply  |  Post Message  |  Messages List  |  Start a Board

@Aroper-VEC: I agree with you and I think this is the right approach to adopt. The idea is to make the software layer highly intelligent that it controls the hardware layer on its own and gives higher flexibility and ease of use. This is similar to the concept of SDN (software defined networking) where the virtual layer conceals the network hardware and cabling.
Reply  |  Post Message  |  Messages List  |  Start a Board

"Its not easy for these guys to change everything on the whims and fancies of Software Companies-Today Google wants something,Tommorow MSFT wants something else,then Salesforce???"

@Ashu001: I think it makes sense if these companies are driving innovation and bringing about changes. The manufacturers thrive because these companies demand their products so they have to be flexible enough to adopt. In case they fail to do so, someone else will step up and meet the demands. You can't afford to resist change and try to maintain status quo in this fast-paced industry.
Reply  |  Post Message  |  Messages List  |  Start a Board
Page 1 / 3   >   >>
Editors' Choice
Hot Topics