Microsoft is strengthening its relationship with cloud storage provider Dropbox by adding additional integration with its Office Online suite.

Microsoft and file-sharing specialist Dropbox continued on their path towards deeper integration this week when the software giant announced that it would add more Dropbox functionality to its Office Online suite.

This update frees users from the desktop versions of Office, or their own computer for that matter, and allows them to update Office files stored in their Dropbox account -- including Word, PowerPoint, and Excel files --directly from their browser through Office Online.

Users will also be able to access their Dropbox account directly from Office Online. In addition, those using Microsoft tools can now save new files to the site or open any existing Dropbox files without leaving Office Online.

"Whether you start in Office Online, or from Dropbox, it's simple to work with Office and Dropbox on the web," Microsoft's Office Blog explained in an April 9 post. "All Dropbox and Office Online users have access to this new experience today." 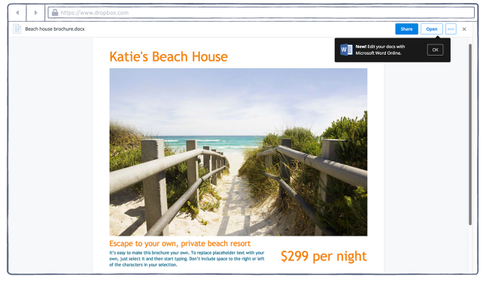 The integration is offered for Dropbox for Business customers with an Office 365 license, and for Dropbox Basic and Pro users, the company noted.

"We're willing to bet that your Dropbox is home to quite a few Microsoft Office files -- and starting today, working with those files is even easier," Dropbox's Nikhil Bhargava wrote on the company’s blog this Thursday. "Just click the 'Open' button when you're previewing a Dropbox file on the web, and you can edit the file right from your browser via Office Online. Any changes will automatically be saved back to your Dropbox."

[Read about 40 years of Microsoft.]

The latest announcement builds on a partnership the two companies forged in November 2014, when Microsoft updated Office apps for iPad and iPhone, as well as Android phones, to offer support for Dropbox.

The deal also pushes Microsoft deeper into offering more cloud services, and into partnering with an array of different companies that can help Redmond make its signature productivity apps more accessible to a wide range of people, especially those who rely of mobile devices and laptops for much of their work.

Once the user has added a Dropbox account to Word, Excel, or PowerPoint, it is possible to navigate folders and files on Dropbox for viewing and editing in native Office apps.

The functionality extends to collaboration, allowing users to invite colleagues to work with them by sharing a link to a file on Dropbox directly from Word, PowerPoint, or Excel.

While Microsoft offers a competing cloud-based sharing service, OneCloud, its partnering with Dropbox suggests the company is interested in making Office apps stickier by broadening compatibility and feature sets.

For its part, Dropbox now gets a de facto editing suite the site previously lacked.

In March, Dropbox announced updates to its document preview feature, and redesigned the document toolbar at the bottom of the preview so that it adapts to the type of file -- document, spreadsheet, presentation, or PDF -- being previewed.

Depending on the layout of a file users are presented with a set of options, like zooming in, going to full-screen mode, flipping between pages, or printing straight from the preview. The toolbar only appears when a user hovers over the bottom of the screen.

Nathan Eddy is a freelance writer for InformationWeek. He has written for Popular Mechanics, Sales & Marketing Management Magazine, FierceMarkets, and CRN, among others. In 2012 he made his first documentary film, The Absent Column. He currently lives in Berlin. View Full Bio
We welcome your comments on this topic on our social media channels, or [contact us directly] with questions about the site.
Comment  |
Email This  |
Print  |
RSS
More Insights
Webcasts
What We Can Learn from Sports Analytics
The Failures of Static DLP and How to Protect Against Tomorrow's Email Breaches
More Webcasts
White Papers
Improving Your Enterprise's Protection With Cyber Resilience
The Insecure State of Microsoft Teams Security
More White Papers
Reports
Special Report: Edge Computing: An IT Platform for the New Enterprise
Building an Effective Cybersecurity Incident Response Team
More Reports

With Microsoft's unrelentless push toward all things "365," I'm surprised it took this long for the earlier Dropbox integration to move down this path. It had to happen eventually because everything I hear, as a business decision maker, from Microsoft is all about 365.
Reply  |  Post Message  |  Messages List  |  Start a Board

Great to hear that Microsoft is catching up to Google Docs.
Reply  |  Post Message  |  Messages List  |  Start a Board

That's how MS operates. They are not necessarily the most innovative group. They just throw lots of money at problems and take over companies to help them get into a market. If it weren't for Google's innovations, Office would still be on floppies. Then again if it weren't for Apple, MS would be hawking MS-DOS.
Reply  |  Post Message  |  Messages List  |  Start a Board
Editors' Choice
Hot Topics