Salesforce on Azure may sound implausible, but in the wake of a similar deal with Oracle, rumor has it the two companies are talking.

Microsoft and Salesforce.com are hammering out a deal that will bring Salesforce applications to Microsoft's Azure cloud platform, Bloomberg reported on Thursday.

[Editor's note: Microsoft and Salesforce.com formally announced their deal after this story was published. Contrary to the rumor, the partnership will not see Salesforce apps on Azure. Read Microsoft, Saleforce.com Make Nice, Marry Apps.]

Any deal between Salesforce and Microsoft would mark a big change in a chilly relationship between the two companies. Microsoft sued Salesforce.com for patent infringement in 2010, and Microsoft's Dynamics applications unit has aggressively positioned and priced its CRM application to go up against Salesforce. What's more, Salesforce CEO Mark Benioff has also been a frequent critic of Microsoft, although those criticisms have cooled somewhat since Satya Nadella was named Microsoft's CEO in February.

A deal between Salesforce and Microsoft wouldn't be a complete surprise given last year's first-ever partnership between Oracle and Microsoft. That deal brought Oracle applications, middleware, and database services to Azure. And earlier this month, Microsoft and longtime partner SAP announced that SAP enterprise applications will soon be available on Azure.

Salesforce doesn't want to be left off that list, and Microsoft is clearly growing its cloud platform with popular application choices rather than favoring its Dynamics unit with exclusivity. Dynamics applications include CRM as well as AX, GP, and NAV ERP applications. 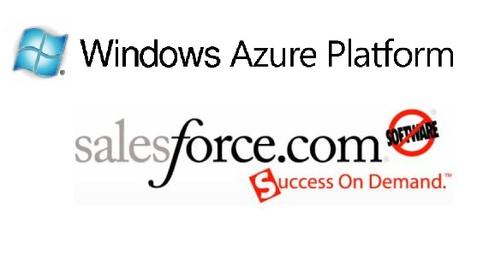 Oracle, SAP, and Salesforce applications are all used in combination with Microsoft desktop applications and, frequently, infrastructure software, so why not extend co-existence into the cloud era? It could be that management changes at Microsoft opened up door to warmer relations with Salesforce.com.

When it comes to managing data, don't look at backup and archiving systems as burdens and cost centers. A well-designed archive can enhance data protection and restores, ease search and e-discovery efforts, and save money by intelligently moving data from expensive primary storage systems. Read our The Agile Archive report today. (Free registration required.)

Doug Henschen is Executive Editor of InformationWeek, where he covers the intersection of enterprise applications with information management, business intelligence, big data and analytics. He previously served as editor in chief of Intelligent Enterprise, editor in chief of ... View Full Bio
We welcome your comments on this topic on our social media channels, or [contact us directly] with questions about the site.
Comment  |
Email This  |
Print  |
RSS
More Insights
Webcasts
What We Can Learn from Sports Analytics
Strategies for Success with Digital Transformation
More Webcasts
White Papers
A Technical Deep Dive on Software Exploits
Improving Your Enterprise's Protection With Cyber Resilience
More White Papers
Reports
The Malware Threat Landscape
Special Report: Understanding Your Cyber Attackers
More Reports

As Microsoft and Salesforce.com announced after this article was published, they do have a deal -- read "Microsoft, Salesforce.com Make Nice, Marry Apps" -- but the partnership will not see Salesforce apps running on Azure. An Oracle-Microsoft partnership announced last year made Oracle apps available on Azure. And SAP apps will hit Azure in June through a separate deal announced earlier this month. But many Oracle and SAP apps started out on-premises, with versions running on Windows and SQL Server. Salesforce apps have never run on premises or on Microsoft infrastructure.
Reply  |  Post Message  |  Messages List  |  Start a Board

This is a very good point.  The heavy emphasis on .Net has been one of the reasons companies turn away from Azure.  Microsoft brings this to the table as a value added feature but unless you are a Microsoft developer and your loyalty runs deep chances are you don't see it in the same light.  Yes there is a way to do many irregular things in an Azure cloud solution but most of us don't want to play those types of games and be special cases since it often leads to slower resolution time when problems arise or a creative work around that breaks after a seemingly harmless patch.
Reply  |  Post Message  |  Messages List  |  Start a Board

Did you catch the Businessweek article on IBM's irrelevance in the cloud? Brutal.
Reply  |  Post Message  |  Messages List  |  Start a Board

The chief criticism of Microsoft's Azure is that it is too Windows and .net-centric. One way for Microsoft to climb out of the Windows box that its built for itself is to open up Azure and try to move into the next era of computing via greater cooperation wtih other companies. A little progress was made on that front in the Ballmer era, despite Steve, but much more remains to be done. For example, would you run your Linux workload on Azure? There's a way to do it, but not many customers choose to. Microsoft must open up more.
Reply  |  Post Message  |  Messages List  |  Start a Board

Agreed Doug, especially given IBM's stance as a strategic partner and adviser to enterprise IT. That's damaged when the company is seen as picking and choosing partners. In contrast, Nadella is acting like, well, an adult and doing what makes sense for customers rather than what his marketing team says. That will pay off.
Reply  |  Post Message  |  Messages List  |  Start a Board

It will be a cold day in July before you'll Oracle apps or databases in IBM's cloud, but these Microsoft Azure partnerships with Oracle, SAP and -- if the rumor turns out to be accurate -- Salesforce.com are starting to make IBM's cloud look a bit sparsly populated. Even Infor -- a company that still offers iSeries software -- has leaned more heavilyt on Amazon for its cloud offerings. You would think IBM would be all over SAP, at least, to run on Softlayer. IBM's longstanding choice to stay out of CRM and ERP is now a problem where having a complete enterprise cloud is concerned.
Reply  |  Post Message  |  Messages List  |  Start a Board
Editors' Choice
Hot Topics