Slideshow: Top 15 Cloud Collaboration Apps
(click image for larger view and for slideshow)
Cloud computing technologies will be responsible for the creation of almost 14 million tech and related jobs worldwide by 2015, a new study claims. The study, by Microsoft and IDC, also predicts that annual cloud industry revenues will total $1.1 trillion beginning in that year.

"For most organizations, cloud computing should be a no-brainer, given its ability to increase IT innovation and flexibility, lower capital costs, and help generate revenues that are multiples of spending," said John Gantz, chief research officer and senior VP at IDC, in a statement.

"A common misperception is cloud computing is a job eliminator, but in truth it will be a job creator--a major one. And job growth will occur across continents and throughout organizations of all sizes because emerging markets, small cities, and small businesses have the same access to cloud benefits as large enterprises and developing nations," said Gantz.

Cloud technologies are creating jobs in a couple of ways, according to the study. One is through direct hiring by IT vendors and organizations as they build out cloud technologies and infrastructures. For instance, Vorsite, a Seattle-based Microsoft cloud partner, plans to double its workforce this year in order to deliver on anticipated cloud projects.

[ Does the cloud have a fatal flaw? Read Why Infrastructure As A Service Is A Bad Deal . ]

Microsoft and IDC also said that cloud technologies are creating jobs by simplifying IT, so that companies can devote fewer resources to maintenance and integration, and more to strategic projects that can grow their businesses. Microsoft pointed to certification organization Underwriters Laboratories, which has moved its collaborative environment to Office 365 and is now able to more quickly resolve testing and safety issues.

"Enterprises that embrace cloud computing reduce the amount of IT time and budget devoted to legacy systems and routine upgrades, which then increases the time and budget they have for more innovative projects," said Gantz.

Most new cloud jobs will be created in media and communications, manufacturing, and banking. In the case of the latter industry, many enterprises are expected to deploy private clouds as security concerns limit their interest in the public cloud, according to the study's authors.

Geographically, emerging markets are expected to see the most growth in cloud-related jobs. Brazil is in line to see growth of 186%, India will see 99% growth, and China is expected to experience 84% growth. Cloud jobs in the U.S. are expected to grow by 66% by 2015. 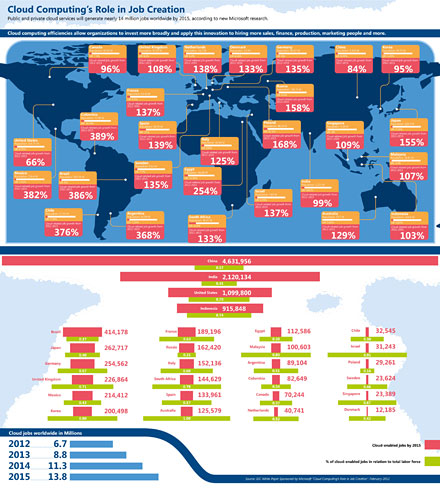 Microsoft, of course, has a strong incentive to pitch the benefits of cloud computing, as it is investing billions of dollars building out its Azure cloud platform, as well as building private cloud technologies into Windows Server 8, which it released to beta testing last week.

Find out how to move beyond server virtualization to build a more flexible, efficient data center in the new Private Cloud Blueprint issue of Network Computing. (Free registration required.)