GE is going full steam ahead in its efforts to become a digital company. This includes new emphasis on IoT and analytics.

It was a funny place to see GE CEO Jeff Immelt. So funny that one of the first questions he was asked at the Gartner Symposium/ITxpo 2015 in Orlando, FL this week was, "What's the CEO of an industrial company doing here?" The answer was coy, and it didn't go nearly far enough to contain GE's ambition of becoming one of the world's Top 10 software companies by 2020.

Immelt said, "I'm here to learn. Here to meet people. Here to hopefully do a little recruiting on the side." What Immelt was really doing was laying the foundation for Predix, GE's new "industrial internet" platform. Predix immediately makes GE a player in the analytics space, the cloud space, and even in security. When he talked about what his company was really doing, he talked about Internet of Things (IoT) startups, analytics startups, and the titan of the cloud. "GE has the same pirate map and we have set sail for the same machine learning treasure everyone else has."

Predix is a cloud-based, open industrial analytics platform that will help you run GE or non-GE products on an industrial scale more efficiently. But Predix isn't exactly the same map everyone else has. GE is capitalizing on 100+ years of building big machines like locomotives, jet engines, and smaller but equally sophisticated machines like medical imaging devices. It came organically through the business as an evolution of the knowledge inside GE.

"Even in the 1990s, we believed software was our backbone. But we outsourced everything. We convinced ourselves that we were knuckleheaded and people had to help us with software," Immelt said. "And then you wake up one day, and you realize that the locomotive you sell is a mobile data center. And you have to change." 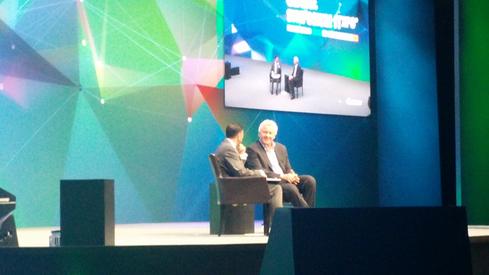 At the heart of GE's move into digital is this understanding that the value of its product is as much, if not more, in the data created by the product as the product itself. Immelt gave the example: If GE can use data to improve the speed of trains by 1 mph per day, it would mean $200 million to its locomotive customers.

At another session at Gartner, GE Product Manager, GE Global Resource, Jeramiah Stone explained how GE squeezed out that extra mile per hour.

It isn't the trains themselves being faster, it is managing traffic, uptime, and the tracks. Predix can help trains along the entire rail line go on "cruise control" so each train can respond to the speed and direction of every other train on the tracks. GE says it hopes to be able very soon to map anomalies in the track by sending small electrical signals through the wheels of the locomotive in order to see the types of small failures or irregularities that could lead to major delays.

GE takes the data from all of its assets in the field and creates a "digital twin." So, instead of using a theoretical model of all engines of a certain type and the way they should perform, it uses the data to track the real thing in the real world. So, if there are 100 engines out in the world, there are 100 digital twins to those engines. Each one is tracked in order to understand how it works.

For example, data showed that engines that were going down for maintenance much faster than expected were going to the Middle East and Asia more often than other engines. The high sand environment was wearing them out more quickly. So, GE devised a cold water wash system that reduced the number of engines taken off for repairs and saved $7 million for its customers.

Immelt calls this being a "digital industrial company." But InformationWeek readers would recognize this model of offering "x-as-a-service" to customers. In addition to selling the engine, the service is now providing the data on the engine, upgrading the engine through software, and lengthening the value life cycle of the product. It isn't all that different from what a network services provider might do.

Of course, there are several players in the cloud analytics platform space, and most are long established tech companies. What makes Immelt think they can compete? "Because we know our business better than anyone," he said. "Software eats the world, but it turns out if you want to make a jet engine like us, you have to go in the way-back machine 25 years and do years of testing and spend millions of dollars. We have the material science and physics and engineering knowledge. We're just adding the analytics layer."

How committed is GE to being a software company? It has $5 billion in revenue from software already. It's aiming for $20 billion by 2020. If that doesn't tell you that you'll be hearing of GE as a software company for a while, this might: "I would say that digitalization of this company is the single most important initiative I've ever been engaged in," Immelt said.

David has been writing on business and technology for over 10 years and was most recently Managing Editor at Enterpriseefficiency.com. Before that he was an Assistant Editor at MIT Sloan Management Review, where he covered a wide range of business topics including IT, ... View Full Bio
We welcome your comments on this topic on our social media channels, or [contact us directly] with questions about the site.
Comment  |
Email This  |
Print  |
RSS
More Insights
Webcasts
Managing Your Enterprise Collaboration Platforms
Fact or Fiction? The Truth About Cloud Native Security
More Webcasts
White Papers
Enterprise Guide to Policy as Code - Design, Build, and Runtime
Case Study: Leading Financial Institutions
More White Papers
Reports
State of DevOps 2021
Cloud & Hybrid Security Tooling Report
More Reports

@jastroff- I don't know if GE every went away or died. People looked at them selling off units as "focusing." Immelt said in his interview that if having 300,000 employees with $65 billion in profits is a "focused" it is sure focusing on the right things.

At any rate, this is a company that has made over $300 billion in profits the last 5 years so the fact that they have to say they aren't dead is crazy.

Can GE, change its image and become a diigtal company? A room full of CIOs seemed to take it seriously so I think they can. But it is an uphill climb. GE is smartly selling to its existing customers first. So if they can win them over, I suspect they can broaden their horizons.

< I was just saying to a colleague that my feeling about Gartner is that they have a way of making grand predictions that can't possibly be true and a way of making obvious predictions sound grand.> well put, David!
Reply  |  Post Message  |  Messages List  |  Start a Board

They go both ways in my opinion. I think there's no doubt though that the industrial internet (as GE calls it) or the Internet of Things for industry (as the rest of us call it) will have a larger economic impact first before the consumer market does.

So it wouldn't surprise me if GE made money off the IoT before a lot of other people did.
Reply  |  Post Message  |  Messages List  |  Start a Board

@David Personally, I think that Gartner tends to be a bit too optimistically bullish about such things, both in terms of how soon and how much can be attributed directly to the technological advance.
Reply  |  Post Message  |  Messages List  |  Start a Board

@ariella- Well, I can't say I know for sure because a lot of it depends on how the market receives Predix. But Gartner predicted that IoT was going to make a $1 trillion market. So it strikes me that $20 billion isn't that big a chunk.

I think the issue is not the revenue number but if Gartner and GE are a little optimistic about WHEN this becomes a big market.
Reply  |  Post Message  |  Messages List  |  Start a Board

I know GE is going full steam ahead on Predix. Do you think it really will get them that position by 2020, David? I have my doubts.
Reply  |  Post Message  |  Messages List  |  Start a Board
InformationWeek Is Getting an Upgrade!