The Google-backed underwater cable connecting Japan and the US can transmit data at 60 terabits per second and spans nearly 5,600 miles.

A nearly 5,600-mile underwater cable system called FASTER linking Japan and the West Coast of the US has been completed and is ready for service following end-to-end testing earlier this week.

Thanks to the use of optimized fibers throughout the submarine portion, the six-fiber pair cable can deliver 60 terabits per second (Tbps) of bandwidth across the Pacific. That's around 10 million times faster than the standard cable modem.

Construction of the system was announced in August 2014 by the FASTER consortium, consisting of Google, China Mobile International, China Telecom Global, Global Transit, KDDI, and Singtel. The total amount of investment for the FASTER system is estimated at $300 million. 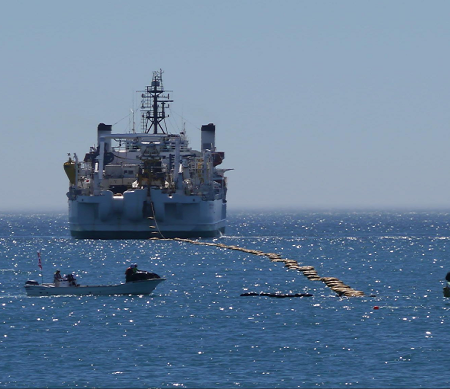 The FASTER cable system, which is located in Oregon and has two landing points in Japan, specifically in Chiba and Mie Prefectures, has extended connections to major hubs on the West Coast of the US covering Los Angeles, the San Francisco Bay Area, Portland, and Seattle.

The cable system's connectivity to other neighboring systems extends the cable's capacity beyond Japan to other Asian locations, while the two landing points in Japan facilitate the cable's easy access to major cities in the country.

"We are honored that the consortium entrusted us to build FASTER. Although we faced many challenges during the construction, I am truly glad that we were able to overcome these and to welcome this day," Kenichi Yoneyama, project manager for FASTER at NEC's submarine network division, wrote in a June 29 statement. "This epoch-making cable will not only bring benefits to the United States and Japan, but to the entire Asia-Pacific region."

FASTER is one of a few hundred submarine telecommunications cables connecting various parts of the world that collectively form an important infrastructure that helps run global internet and communications services.

[Read how Box is offering enterprises a new path to the cloud.]

In May, Google rivals Microsoft and Facebook announced a partnership to build a massive undersea cable across the Atlantic, intended to meet a growing demand for fast, resilient connectivity for Facebook, Microsoft, and their customers.

Dubbed "MAREA," from the Spanish word meaning tide, the cable will span about 4,101 miles and connect Virginia Beach with Bilbao, Spain. From there, it will extend to network hubs in Europe, Africa, the Middle East, and Asia.

That cable system is being developed with an "open" design, so it can work with a variety of networking equipment. That design is good for customers, who can benefit from lower costs, easier equipment upgrades, and faster growth in bandwidth rates, because the system will be able to "evolve at the pace of optical technology innovation."

Microsoft has been significantly investing in subsea and terrestrial dark fiber capacity by engaging in fiber partnerships that span multiple oceans and continents.

According to digital marketing consultant Builtvisible, as of 2015 there have been nearly 300 underwater cables built in oceans around the world, totaling slightly less than 680,000 miles of cable.

Nathan Eddy is a freelance writer for InformationWeek. He has written for Popular Mechanics, Sales & Marketing Management Magazine, FierceMarkets, and CRN, among others. In 2012 he made his first documentary film, The Absent Column. He currently lives in Berlin. View Full Bio
We welcome your comments on this topic on our social media channels, or [contact us directly] with questions about the site.
Comment  |
Email This  |
Print  |
RSS
More Insights
Webcasts
Managing Your Enterprise Collaboration Platforms
Fact or Fiction? The Truth About Cloud Native Security
More Webcasts
White Papers
Gorilla Guide Extended Detection and Response
How to Build Your Incident Response Plan
More White Papers
Reports
Privileged Access Management Checklist
A Practical Guide to Enabling 5G Deployments
More Reports