Android is growing fast, Google said at its developers conference, and soon will be able to interact with home appliances and other hardware.
Thomas Claburn
Editor at Large, Enterprise Mobility
May 10, 2011 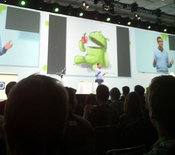 Google Kicks Off IO Developer Conference
Before a crowd of enthusiastic developers at its annual developer conference, Google on Tuesday lauded the momentum of its Android mobile operating system, introduced cloud music and video services, and offered a glimpse of Android's dominion over appliances in the home.

Google VP of engineering Vic Gundotra arrived on stage to offer a brief review of previous Google I/O events. He summarized the company's 2010 developer conference with an image--the green Android robot devouring an apple, which is to say Apple, Google's principal competitor in the smartphone market.

Hugo Barra, director of Android product management, then offered an overview of Android metrics. He revealed that Google has recorded more than 100 million Android activations to date, thanks to the work of 36 industry partners, 215 mobile carriers, and 450,000 developers worldwide. That broad base of support has brought the number of Android activations per day to 400,000, four times what Google reported in May last year. And Barra said that Google's Android Market now has more than 200,000 applications and that 4.5 billion Android applications have been downloaded and installed.

Google has updated Android 3.0 ("Honeycomb") to 3.1 and is now rolling that update out to Verizon customers that have Motorola Xoom tablets. Android 3.1 will also be coming to Google TV devices later this summer.

Ice Cream Sandwich, the next version of Android that provides a unified version of the operating system for phones, tablets, and other devices, is scheduled to be released in the fourth quarter of the year. Ice Cream Sandwich includes new head-tracking technology that will allow, for example, tablet webcams to focus on different people when they speak.

Google also launched two cloud services: Movies, a video service that allows Android users to rent movies through the Android Market, play them back on any supported Android device or YouTube, and even cache copies for offline playback; and Music Beta by Google, a music service that allows users--initially in the U.S. only--to copy their digital music collections to the cloud, stream songs to supported Android devices, and cache recently played or specified songs locally for playback without a network connection.

Google is launching its music service without broad support from the music industry, a move necessitated by the March launch of Amazon's competing cloud music service and the resistance of music companies.

"Unfortunately, a couple of the major labels were only interested in doing so on terms that were unreasonable and unsustainable," explained Jamie Rosenberg, director of digital media on Android at a post-keynote press event.

Apple is expected to launch its own hosted music service shortly, though with the blessing of music companies.

Perhaps the most intriguing initiatives to emerge from Google I/O are Android Open Accessory, a specification that allows developers to build hardware accessories that can communicate with Android, an Open Accessory hardware reference design (ADK) based on the open source Arduino system, and Android @ Home, a project that provides Android APIs for interfacing with appliances.