Google Wants You To Be Healthy - InformationWeek

An assortment of cloud-based data-collecting and data-analysis tools aimed at health practitioners, researchers, and individuals offers ideas for any enterprise looking to maximize cloud computing.

The promise of cloud-based computing has fascinated users since it became widely available. But it has been hard to point out specific illustrative examples of what this kind of computing can actually deliver to the C-suite.

Fortunately, real uses that have been in development are starting to come to light. As an example, the Broad Institute of MIT announced last week that it is making its Genome Analysis Toolkit (called GATK) available as a tool on the Google Cloud Platform.

The institute said in a statement: "The goal is to enable any genomic researcher to upload, store, and analyze data in a cloud-based environment that combines the Broad Institute's best-in-class genomic analysis tools with the scale and computing power of Google."

[ Is technology out to get us? Read 9 Ways Technology Is Slowly Killing Us All. ]

GATK is used to analyze genomic sequencing data. The massive amounts of data that it uses requires some major computing power in order to be productive. The Google Genomics service gives researchers another way to process their data so that are they not limited by their computing infrastructure. Though still in an alpha release for the cloud, GATK is expected to proceed rapidly. Broad also noted that this relationship is non-exclusive to Google, and other similar projects may be developed.

This is a good illustration of cloud computing's advantage for an enterprise -- the unshackling of computing projects from available computer infrastructure. By having computing resources expand and contract as needed, enterprises can tackle the kinds of projects that might not have been attempted if intense capital investment had to be done beforehand. 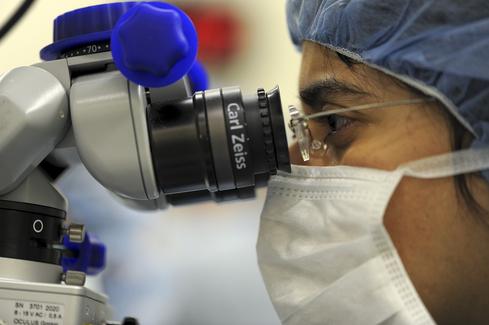 Google has delved into health in a big way in the last few years. It launched Calico in 2013, which has the lofty goal of trying to understand and mitigate human aging. Calico has announced multiple partnerships with some of the leading researchers in the aging field, with the stated goal of making discoveries into products or therapies.

Google has also moved into developing hardware such as the smart contact lens, which measures the glucose level in tears, to be marketed by Novartis. Google also announced this week a wristband for collecting clinical data that can then be processed by medical researchers.

These wearables will most likely be used in the Baseline project, which Google announced last year.

All of these health efforts have a common need for the collection and analysis of massive amounts of data. Google is showing other enterprises that such projects can be done, and how to do them.

Larry Loeb has written for many of the last century's major "dead tree" computer magazines, having been, among other things, a consulting editor for BYTE magazine and senior editor for the launch of WebWeek. He has written a book on the Secure Electronic Transaction Internet ... View Full Bio
We welcome your comments on this topic on our social media channels, or [contact us directly] with questions about the site.
Comment  |
Email This  |
Print  |
RSS
More Insights
Webcasts
Zero Trust for a Work-From Home World
Optimizing App Performance in the Cloud
More Webcasts
White Papers
Why Add Security to Your Skill Set and How to Do It
How Secure Are Your Endpoints?
More White Papers
Reports
Intelligent Outcomes Are Key to Business Resilience
Building an Effective Cybersecurity Incident Response Team
More Reports

@Broadway0474 interesting observation/point... for now it no escape from hidden adds... or just pure spam hidden in the field view...
Reply  |  Post Message  |  Messages List  |  Start a Board

asksqn, that is a hilarious example of possible spam --- in fact, I think I actually got that spam email yesterday. Seriously, though, emails like that will not happen unless the companies involved in the healthtech data/IoT space get lawmakers to completely emasculate HIPAA rules.
Reply  |  Post Message  |  Messages List  |  Start a Board

You just made me laugh out loud and squirm at the same time.
Reply  |  Post Message  |  Messages List  |  Start a Board

While the gee-whiz factor will absolutely astonish those in the C-Suite who are in most instances barely capable of using/understanding email, for the rest of us, the intrusion of Google into our EHR is absolutely frightening.  Personally, I am imagining spam in my inbox along the lines of:


Since your biopsy came back positive for colon cancer, click here for discounted pharmaceuticals!

Great to see Google expand into genres like health, which could over time make a huge impact on people's lives. I think technology that doesn't specifically come from the medical field has a really high chance of helping us all understand the impact of aging on our health, and help to reduce the instances of disease.
Reply  |  Post Message  |  Messages List  |  Start a Board

You already carry a tracking device that you paid for called a smartphone.

Apple is taking the public position that they wont share your data with anyone else. Except for Apple, I guess.

Google hasn't publicly taken this position. It may have to in order to compete.

This is very similar to a flashdrive in your car that sends information to your insurance company who may then give you a discount for being "good".

What information do we want to trade off for convienience or money?

Larry, are supposed to feel any better about Apple having that personal data? With their payment technology, they'll be able to know where we're shopping, what we're buying, for how much, giving them a sense for our everyday lives and budgets. Layer on top of that health information, and they'll be able to predict our longevity, our existing and pending diseases and health conditions --- essentially, allowing them to become our masters.
Reply  |  Post Message  |  Messages List  |  Start a Board

Apple has a similar product for health data collection, and really, really hopes you feel that way about Google.
Reply  |  Post Message  |  Messages List  |  Start a Board

The thought of Google having real time health data on me is more than a little disturbing. Google already knows where I am driving, what I am searching for, and who I am emailing. If they have devices that start collecting health data, it seems like a small (albeit unethical) leap to be selling that data to health providers.
Reply  |  Post Message  |  Messages List  |  Start a Board
Editors' Choice
Hot Topics