GrabCAD Print takes the GitHub concept of a processing and sharing hub that can deal with many different file formats and applies it to the 3D-printing process. The goal is to make prototyping faster and less convoluted.

3D printing is supposed to help smooth the path from designer's mind to prototype. It does, when compared to processes involving clay sculptures and other handcrafted models. Still now, there are many steps involved -- including some that Stratasys hopes to wring out of the process with the release of GrabCAD Print.

In a phone interview, Paul Giaconia, vice president of software products for Stratasys, said that there are still many limitations in additive manufacturing -- the industry's term for processes such as 3D printing. "Printers need to be more connected." He added that the connections he's talking about apply to cloud rendering and the design process itself.

GrabCAD, owned by Stratasys since 2014, is a cloud-based hub allowing collaboration around CAD files through GrabCAD Workbench. Functioning in ways that are broadly similar to GitHub for software developers, Workbench allows designers and engineers to check CAD documents in and out, see version histories, and share files with colleagues. GrabCAD Print takes the same idea of a processing and sharing hub that can deal with many different file formats, and applies it to the 3D printing process. 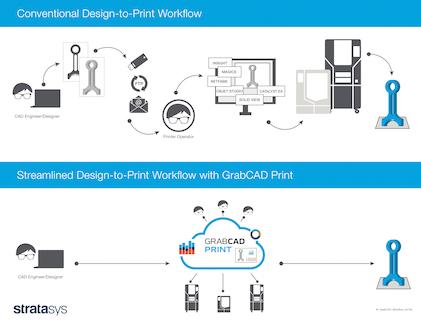 GrabCAD Print is intended to shorten the prototyping process as shown in this illustration from Statasys.

"There's a quality gap built into the design-to-printing process," Giaconia said, explaining that quality and time are lost at the interfaces between hardware and software, or between two pieces of software that must be employed in the prototype-creation process. "There are too many tools between the concept author and the printed part," he said. The idea behind GrabCAD Print is that there should be one step between creating the CAD file and seeing the finished 3D-printed prototyped.

GrabCAD Print allows a file in any of a number of popular CAD formats including PTC Creo, Dassault Systèmes' SOLIDWORKS, CATIA, and Autodesk Inventor to be uploaded to the GrabCAD Print cloud. From there, it is sent directly to a Stratasys 3D printer available to the designer. Intermediate rendering, slicing, and management steps are all performed within GrabCAD Print and away from the view and interaction of the designer.

[How does a global logistics operation make use of 3D printing? Read UPS: 3D Printing Maps out a New Future.]

One of the keys to the GrabCAD Print approach is that it makes print management via a Web browser interface available to anyone with authorized access to the 3D print job. This means a print technician no longer has to be on-site to verify consumable levels or make sure that the print job is running successfully. That information is available through a GrabCAD Print Web interface on any device. 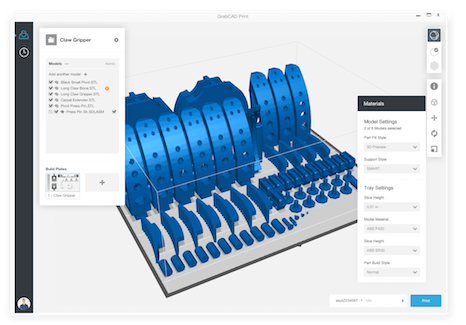 GrabCAD Print's Web-based interface allows users to share information from CAD files and details about the printing process to users on a wide variety of hardware platforms.

Giaconia gave an example of an engineer who can kick off a complex print job late in the afternoon and schedule it to run into the night. Rather than having to wait until the next morning, or to come into the office during the night, to see whether the print job is running properly, the engineer can check the status on a tablet or smartphone from home. 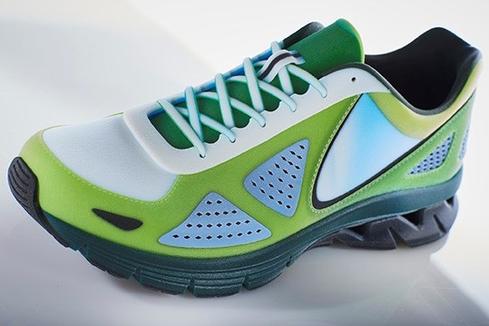 Used in conjunction with multi-material 3D printers, GrabCAD Print can shorten the process of creating prototypes.

GrabCAD Print supports Stratasys uPrint SE, uPrint SE Plus, Fortus 250mc, Dimension Elite, and Dimension 1200es printers. Support for more models is coming later in the year, according to the company. The service is in public beta now and will remain so into fourth quarter 2017. GrabCAD Print is available at no cost to Stratsys 3D printer customers.

Curtis Franklin Jr. is Senior Editor at Dark Reading. In this role he focuses on product and technology coverage for the publication. In addition he works on audio and video programming for Dark Reading and contributes to activities at Interop ITX, Black Hat, INsecurity, and ... View Full Bio
We welcome your comments on this topic on our social media channels, or [contact us directly] with questions about the site.
Comment  |
Email This  |
Print  |
RSS
More Insights
Webcasts
The Failures of Static DLP and How to Protect Against Tomorrow's Email Breaches
Making Cybersecurity Work in Small and Medium-Sized Businesses
More Webcasts
White Papers
Managing OTT Content Distribution in the Connected World
ROI Study: Economic Validation Report of the Anomali Threat Intelligence Platform
More White Papers
Reports
Building an Effective Cybersecurity Incident Response Team
The Drive for Shift-Left Performance Testing
More Reports

Curt, yes, it's fascinating. Here you can watch a couple of videos about 4D printing. It's a collaboration between Stratasys and the MIT's Self-Assembly Lab. There are lots of interesting industrial applications for this technology.

A couple of years ago, there was an exhibition at the Design Museum in London on the future of additive manufacturing. There were super interesting prototypes, including a dress. There were also a couple of 3D printers. You could get a demo and detailed explanation about how the process of 3D printing goes, about materials used, and you could 3D print something little if you wished.

There were lots of school kids who looked really excited. They seemed to be doing some sort of homework there. I was fascinated. Not only for the display of prototypes and stuff but also for realizing that those kids were the engineers and designers of the future who from an early age were experiencing first hand 3D printing first baby steps.

If I would have had more time, I would have loved to talked to them, like I did to a kid who once met at the Museum of Computing History in Cambridge, UK. He loved programming and old computers. Since he lived nearby he was at the museum quite often playing and programming the old machines. They are all functioning and visitors are encouraged to use them.

@Susan, I think tht additive manufacturing is on the verge of changing a number of industries. The commercial/industrial systems are entirely different than the consumer/hobbyist machines -- it's truly amazing just how capable the industrial printing systems are becoming.
Reply  |  Post Message  |  Messages List  |  Start a Board

It's great to see how additive manufacturing is advancing and serving for faster and better prototyping. The multi-material 3D printers have come a long way since the beginning, the same the materials used for 3D printing. Stratasys also partnered some time ago with a team from MIT for 4D projects. That is adding transformability to 3D printing objects. -Susan
Reply  |  Post Message  |  Messages List  |  Start a Board
Editors' Choice
Hot Topics

10 IT Trends to Watch for in 2021 Cynthia Harvey, Freelance Journalist, InformationWeek,  12/22/2020
White Papers
Passwordless: The Future of Authentication
Two-Factor Evaluation Guide
The State of Threat Detection and Response
All In, Online Gaming & Gambling
Universal Internet Connectivity: Reality or Myth?