How To Conquer Software's Rising Costs

Complex licensing policies and increased fees can seems like an insurmountable challenge. These steps can help you get a better grip.
Jonathan Feldman
CIO, City of Asheville, NC
August 24, 2011
What's Most Important?

When we asked in our survey to choose the most important elements of a licensing agreement or contract, respondents cited the SLA as most important, followed by the perpetual right to use the software and a warranty that the code is free of material defects (see chart, below). Source code escrow was cited as least important--do you really even want the source code to an app if the vendor goes belly up? Probably not.

When they negotiate with software vendors, 73% of our respondents get concessions at least some of the time. Anybody can get 5% to 10% off the list price, but apparently a quarter of these respondents typically get 11% to 15% off and a fifth of them get 16% to 20% off. So don't be shy in asking.

Bear in mind, however, that you usually must agree to something in the terms and conditions to get price concessions. One thing we've seen customers agree to is to pay for the software before the implementation. It might seem scary to agree to pay up in advance, but considering that two-thirds of a software implementation's cost is normally for consulting or other labor, if the project goes off the rails, you will never get that money back--and you'll never get your company's business staff time back either. Software implementations fall into the "failure is not an option" category. So why not pay for the software up front and save a bunch of money?

Use that frantic vendor need to recognize revenue on the software as a lever to also get concessions on things like consultant fees and hold-backs on final payments for implementation.

One final point about commercial software in general. It seems that businesses are more savvy with licensing for enterprise applications than for infrastructure software. It's time to treat important infrastructure software--VMware, SQL Server, and the like--as enterprise software rather than one-off shrink-wrap software. That means planning the ultimate number of licenses and entitlements you'll need, and crafting an RFP and a contract for the expected life cycle of the software. 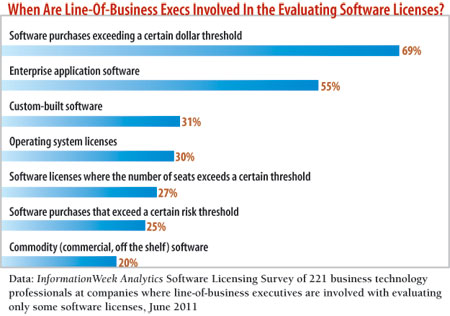 There's so much agita over commercial software licensing that we had to ask in our survey about the open source alternative. It's a measure of how far open source has come that 41% of respondents don't have a preference either way.

And some of our respondents are big believers in open source. Rich Banta, CTO of Lifeline Data Centers, says the outsourced data center provider has "dedicated considerable resources to converting to open source systems wherever possible" given its frustration with Microsoft's service provider license agreement.

Arthur Koch, president of Koch Environmental Analytical Consultants, finds the commercial software activation process to be burdensome. He likes to experiment with various machines and configurations, he says, so having to activate the software every time he moves from one machine to another is aggravating. Koch says he's careful to comply with software license agreements but complains that commercial licensing "treats me as a potential criminal." Like Banta, he says he's gone to open source as much as possible.

Whether you choose open source or proprietary products, the bottom line for CIOs is that software licensing requires a pragmatic view and active, involved management. It requires skilled negotiation. And it requires the courage to walk when a provider offers unacceptable terms.