IaaS A Bad Deal? Not So Fast

Download the entire May 2012 issue of InformationWeek SMB, distributed in an all-digital format as part of our Green Initiative
(Registration required.)

A recent column by Art Wittmann arguing that infrastructure-as-a-service is a bad deal attracted significant controversy, largely among promoters of the public cloud. Wittmann presents detailed numbers showing that, from a capital expenditure perspective, buying your own storage hardware is significantly less expensive long term than paying an IaaS vendor to rent its hardware.

My response: If you're not saving money with IaaS, you're doing it wrong. The benefits don't come from getting less-expensive storage than you can buy for your own data center. Rather, they come from Amazon EC2's online server capacity, so to criticize IaaS and ignore EC2, as Wittmann does, is to miss the point.

Now, the math is different for an established Fortune 1,000 with a half-dozen data centers than it is for a startup that came of age in the cloud era. New companies without data center footprints are reaping the greatest benefits. But no matter who you are, the major cost benefit of the cloud has nothing to do with renting hardware and everything to do with eliminating labor costs around server administration and maintenance. That Fortune 1,000 likely already has significant server automation and maintains server-to-admin ratios in the hundreds. For smaller shops, server-to-admin ratios are more likely to be in the low double digits. The hardware provisioning economies of scale enterprises enjoy haven't been available for companies that have just hundreds of servers--until now, through IaaS vendors.

A company I co-founded, BuildFax, launched on the public cloud without any of the costs of a conventional data center but with all of the benefits: redundant Internet connections and power sources; top-of-the-line physical security; and dedicated, 24-hour staff. Had we decided to build a data center, the manpower cost alone for a network and a systems administrator, at a combined salary and benefits of more than $150,000 per year, is a sum that, for us, completely dwarfs the hardware costs on which Wittmann bases his argument that IaaS is a bad deal.

The table, on the previous page, demonstrates two possible paths that a company like BuildFax could take at launch. I think the numbers speak for themselves.

So how is BuildFax able to get by without a system or network admin? Simple: A properly configured cloud architecture on IaaS means that the standard tasks involved in setting up a new server instance are handled by our IaaS vendor. From then on, our developers can do all necessary system and network administration through a control panel, like the Amazon Web Services control panel; a cloud management platform, such as RightScale or enStratus; or an API, like the AWS API. It's really that simple, and at BuildFax, we've been operating this way for more than 2-1/2 years with between 50 and 1,000 virtual machines running at a time.

Now, it's true that savings on personnel cost are only realized if your organization is willing to automate workers out of their jobs. But at least those hours could be shifted to work that benefits the business more directly. And yes, theoretically, these automation benefits are available for private clouds using software like Citrix/Apache CloudStack or Eucalyptus and a hypervisor like Xen or VMware. But the reality is that private cloud software is still very much a work in progress. The current (unusable) state of the "marquee" product in the space, OpenStack, shows that we're years away from simple, turnkey private cloud automation. This is why the public cloud is so compelling today--it's the only way most of us are going to get a fast, cheap, and easy way to automate server provisioning.

So how do you know if IaaS is a good deal for your company?

Successful IaaS adopters tend to fall into one of three buckets. One, they have variable loads that represent significantly different server needs over time; this is one place Wittmann and I agree, based on his follow-up. Two, they're startups with no existing data center infrastructure or staff or are established companies taking on a large project that would require significant additional data center infrastructure or staff. Or three, they have a low server-to-admin ratio and are looking to cut costs. You can use public IaaS now, using a cloud management platform to avoid lock-in, and then switch to a private cloud if you so desire once that technology is more stable.

The cost benefits of IaaS over 1990s-era server management are obvious. So is the fact that the public cloud is not for everyone. There are many good reasons to stay tucked within a data center footprint; security and compliance top most lists. But until server automation becomes as easy to do in a data center as it is in the public cloud, IaaS will have significant cost advantages for most companies. 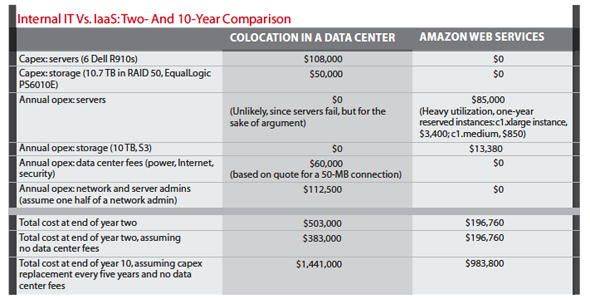