On the mainframe's 50th birthday, IBM positions it as the still young Enterprise Cloud System, capable of running 6,000 Linux workloads.

An IBM mainframe can be subdivided to run Linux virtual machines, in something of the same manner that Amazon Web Services or the Rackspace cloud runs virtual machines. But unlike an AWS host, a single mainframe runs 6,000 VMs at a time.

Likewise, the old mainframe Customer Information Control System, better known as CICS, can process 1.1 million transactions per second. It was the predecessor to client/server architectures and connected thousands of users to a single mainframe. That number, by the way, is more transactions than are conducted by the Google search engine per second, according to a spokesman for IBM partner GT Software in Atlanta.

On the mainframe's 50th anniversary this week, IBM buffed up and displayed it as one of the few systems that can scale to cloud-like proportions. It can still keep up with the x86 server clusters that power many of the Web-scale companies that have emerged in the last 10 years. IBM claimed the mainframe is a suitable platform on which to run the enterprise private cloud, and says public cloud service providers can adopt it for Linux workloads as well. The mainframe, as IBM would have it, is looking young again. 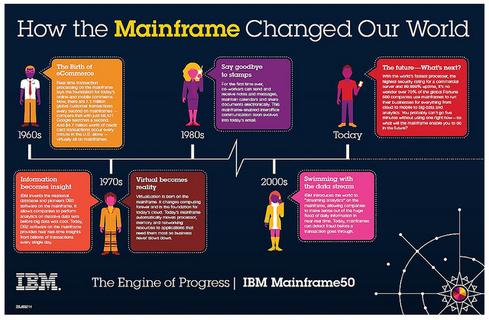 Cloud architectures often look like an attempt to solve with commodity parts the same problems that were answered by the first mainframe's design -- general-purpose operations combined with a large degree of scalability. The mainframe brought concentrated CPUs and memory together, then added access to communications and storage via nearby, high-speed channels. It was an early model of intense computation. And it's enabled IBM, for many of the past 50 years, to keep mainframe system prices high. In the cloud, in contrast, low-cost personal computer processors are packaged with nearby disks and switches on a server rack to produce some of the same attributes. Google, Amazon Web Services, and eBay have all been built on those commodity parts.

Of late, IBM has been lowering mainframe prices so that it can continue to play a role in the cloud. On Tuesday, it took steps to make the mainframe a more attractive host for cloud service suppliers. It announced the first cloud-oriented, System z-based offering, the IBM Enterprise Cloud System. The Cloud System is based on a zBC12 or zEC12 mainframe. As it was announced last July, the zBC12 retailed for about $75,000. In comparison, 2003's mainframe model, the z990 T-Rex, retailed for $1 million.

In its announcement, IBM said the mainframe is now a cheaper environment than x86 servers on which to run Linux virtual machines. Unlike the mainframes that run IBM's proprietary operating systems, the Enterprise Cloud System is geared to run Linux and Linux virtual machines. "Thanks to higher system efficiency and greater scalability, the total cost of some Linux on System z cloud deployments can be up to 55% less than comparable x86-based cloud infrastructure," IBM claims.

The cloud mainframes are equipped with special power processors geared to running Linux virtual machines, called Integrated Facility for Linux (IFL). Each IFL can host 60 virtual machines, and a zEC12 is capable of mounting 100 IFLs. Hence, IBM comes up with a figure of 6,000 VMs for a single mainframe host.

Also on Tuesday, IBM introduced new consumption-based pricing models for managed service providers. If a service provider builds infrastructure based on mainframes, it can pay off the mainframe bill based on its use by customers, instead of an upfront payment.

IBM's example of a company that is doing so is Business Connexion, the largest enterprise service provider in Africa. The firm is packaging mainframes into "pop-up" datacenters that can be installed in a telco's remote office to provide Internet services to a previously unreached area. A mainframe in this setting uses about the same amount of electricity as a clothes dryer, IBM spokesmen said.

Charles Babcock is an editor-at-large for InformationWeek and author of Management Strategies for the Cloud Revolution, a McGraw-Hill book. He is the former editor-in-chief of Digital News, former software editor of Computerworld and former technology editor of Interactive ... View Full Bio
We welcome your comments on this topic on our social media channels, or [contact us directly] with questions about the site.
Comment  |
Email This  |
Print  |
RSS
More Insights
Webcasts
The Experts Guide to Ransomware Response
Multi-Cloud Data Management for Modern Applications
More Webcasts
White Papers
Global software company contracts with CBTS for Virtual CISO
Cisco Threat Response
More White Papers
Reports
A Decade of Passive DNS
The State of Cybersecurity Incident Response
More Reports

This reminds me of the time I told an Amazon exec., "In the cloud, we're trying to solve with commodity components the problems the IBM mainframe solved a long time ago." The response, a look of disbelief followed by: "I never would have thought of it that way."
Reply  |  Post Message  |  Messages List  |  Start a Board

Yes, I think JTemple is right. z cores are not Power cores, and original IFLs are based on specially configured z cores to run Linux. Stewart Alsop II at InfoWorld predicted in 1991 that the last mainframe would be unplugged by an InforWorld reader on March 15, 1996. It was a great prediction, given the fact he represented a publication that was drunk on the PC. I once responded on a panel, "Yes, and he'll be fired by a ComputerWorld reader," my employer at the time. What is it about the Ides of March that brings out the aggression in people?
Reply  |  Post Message  |  Messages List  |  Start a Board
InformationWeek Is Getting an Upgrade!