A crowded field of cloud competitors, including AWS, Microsoft, Google, and IBM, dominated the global cloud infrastructure market in the second quarter of 2016, according to Synergy Research. For IT pros, however, there's plenty of choice when it comes to IaaS, PaaS, and hosted cloud.

Amazon Web Services dominated the cloud infrastructure market in the second quarter of the year, according to a new report from Synergy Research Group, boasting year-over-year growth of 53% and leaving its competitors far behind.

The cloud services division of the popular online retailer captured nearly a third of the worldwide market cloud infrastructure services, with major competitors such as Microsoft, IBM, and Google trailing behind.

However, Microsoft and Google continue to achieve triple-digit year-over-year growth rates of 100% and 162% respectively, while IBM, which has tried for several years to bolster its own cloud offering, posted an impressive growth rate of 57%. 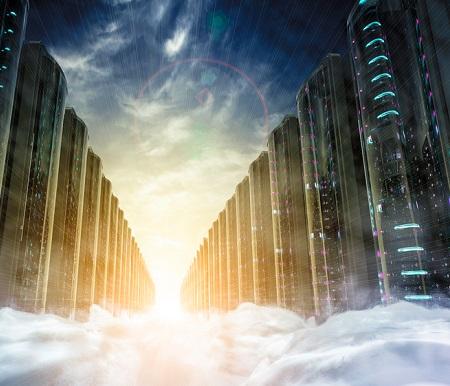 "In a variety of ways Amazon and the other big three players have distanced themselves from the competition in this market and continue to widen the gap," John Dinsdale, a chief analyst and research director at Synergy, wrote in an Aug. 1 statement. "What marks them out as different is their global presence, marketing muscle, ability to fund huge investments in hyperscale data centers and, in most cases, a determination to succeed in the market."

In comparison, the next 20 largest cloud providers, which include Rackspace, Salesforce, Hewlett Packard Enterprise, Alibaba, and others, grew by 41%. All other smaller providers grew by 27%.

Dinsdale noted that Alibaba and Oracle are growing particularly strong, but the two companies are all starting from a long way behind Google, which even with its high rate of growth is still only a sixth the size of AWS.

Since 2006, AWS has provided companies of all sizes with an infrastructure web services platform in the cloud that includes Elastic Compute Cloud (EC2) and Amazon Simple Storage Service (S3).

On July 28, Amazon reported second-quarter financial results that showed that AWS had a 58% revenue growth rate, which lagged behind previous quarters, but still impressed investors and analysts. Revenues for the quarter stood at about $2.9 billion.

[See how $1 trillion in IT spending is moving to the cloud.]

The overall cloud market grew 51% year-over-year, with the top four vendors continuing to grow faster than their smaller competitors, according to Synergy's report. 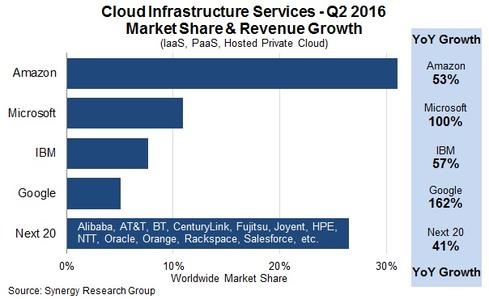 On a global scale, North America continues to account for over half of the worldwide market, and while the Europe Middle East and Africa (EMEA) and Asia-Pacific (APAC) regions are similar in size. The report noted that the APAC region has a somewhat higher growth rate.

What the report also makes clear is that IT departments have a variety of vendors to choose from, and so it's important to tie in the technology to specific business goals. Specifically, it's worth taking the time to determine what advantages the company would gain through their service, such as higher customer retention or streamlined product delivery.

[Editor's note: This article was update to correct the number of survey respondents to 200 from 2,000.]