Microsoft still thinks bigness is goodness, and if you've gotten big, it's because you were meant to rule a given area of the industry.

Microsoft Corporate VP Scott Guthrie predicts that the cloud will sort itself out into a few really big suppliers. "We eventually think there will be three hyper-scale suppliers out there -- Google, Amazon, and us," with hyper-scale defined as a data center provider who can add a million servers a year.

There's an element of truth to the argument that those vendors who build really big data centers and also manage them with a limited number of people have economies of scale that are hard to match. But that's not the whole story in the cloud. The cloud is essentially a more level playing field. Public standards are in use, and many open source technologies play well together. A Microsoft that respects integration with a wide variety of open source and the use of Web services standards would be a different Microsoft than the one we're still confronted with today, whatever its efforts at self-reform.

Guthrie was quick to point out that you can use open source Java, Ruby, Python, and Node.js on Azure, as well as .Net languages, and you can run five different Linuxes. (You get to five if you count Oracle Linux and CentOS as different, even though Oracle Linux is based on CentOS, and if you also count Suse Enterprise Linux and OpenSUSE, plus Canonical's Ubuntu.) That of course leaves out an independent developer favorite, Debian, and the Linux that most enterprises use for production, Red Hat Enterprise Linux. Linux friendship at Microsoft remains selective, something like its ability to get along with open source.

All of this is just a discussion of technology company behavior, or perhaps technology politics, until you get to a fundamental change coming upon the cloud. That would be the efficiency of running Linux container workloads. Guthrie, showing a certain amount savvy concerning trend-lines and buzzwords, managed to work in a mention of Docker running on Linux on Azure. But of course to do that you will be running Docker on a Windows Server, and to get Linux operative there it must be inside a Hyper-V virtual machine.

The current debate is whether there's some way to get individual workloads into the cloud in a Linux container and run them in high numbers in that format on a single, containerized server. Performance, scalability, and density of workloads will go up as you skirt the need for virtual machines. There's still a concern about security -- no one's figured out how they will be made as secure as a virtual machine, with its own isolated copy of the operating system. (Containers share the host's.) But I don't think the last word has been written yet on what can be accomplished with improved container security. 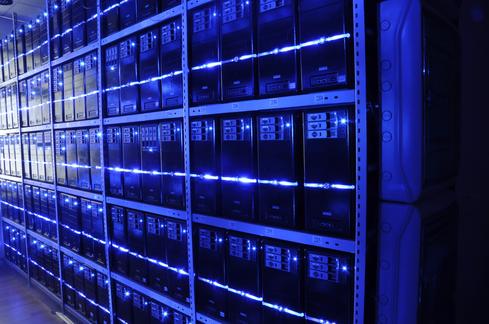 We'll see whether bigness rules in the cloud as it did on the desktop. Or will openness, something that can be practiced by small providers as well as big ones, win out in the long run? There is nothing that says Microsoft won't exhibit more openness in the future. But if you're interested in running Docker on Azure, you might look to Red Hat's leadership in adopting containers. The Atomic Red Hat Enterprise Linux Server will be optimized to host Docker containers. To get to a more open architecture, Microsoft could start by creating Atomic RHEL servers to run Linux containers directly and encourage Azure's growth that way. Then again, Microsoft may prefer to rely on big data centers and a big Windows customer base to become a big cloud vendor.

That brings up a second thing that came out of Structure as I listened to Adrian Cockcroft, the former Netflix cloud architect, now a technology fellow at Battery Ventures. He offered a succinct assessment of what's going on in the PaaS market. It appeared to him that Cloud Foundry, with a long list of backers and a newly established foundation behind it, was the big winner in platform as a service. That would mean developers of next-generation applications would be likely to use it, leaving its backers in a position of strength to integrate their technologies with Cloud Foundry operations. This would be a huge win for VMware, and its owner EMC, and for IBM, Verizon, CenturyLink, and other vendors who've decided to support it.

Not so fast, said Cockcroft. As Cloud Foundry lined up the industry names, Docker Inc. and its Docker project lined up the developers. "Cloud Foundry may have been running away with it, but Docker did an end-run around the things it does as PaaS," he told the Structure audience.

Docker builds in some shortcuts to the work that developers normally have to take to get an application ready for deployment. It captures an application and its dependent pieces of software and then layers them into a Linux container. The layers will always fire up in their assigned sequence under an operating system that's been checked to have the correct kernel. Each layer can be maintained separately. The container as a whole can be moved around like a shipping container -- by using certain methods of handling and defined attachment points.

Containers don't eliminate the need for PaaS, but they force it to change its focus, shrink the number of things it's trying to do, and pull closer to the operational side of the house, rather than keep PaaS as a developers-only fiefdom. These are things the users of PaaS are already thinking about, so moving toward use of Docker as a standard is a likelihood, if not a foregone conclusion.

"I'm not sure they planned it that way, but that seems to be the way things have worked out," concluded Cockcroft.

Conclusion number two: Forget what you thought you knew about Cloud Foundry. Docker is disruptive, PaaS is being disrupted, and the next-generation development environment remains up for grabs.

Here is another one from Adrian Cockcroft: OpenStack, which carries the hopes of many developers and cloud users for a future open cloud architecture, may never get there. I've worried that all the strong vendor interest in OpenStack, while seeming to be a big plus, actually brought a lot industry conflicts inside the project, where they would be likely to play out in a confused and conflicted pattern.

Cockcroft said something like that has already happened, though he didn't get into many specifics. One point he made was VMware and Cisco "will fight over the software-defined networking layer," which seemed self-evident to me. OpenStack doesn't necessarily have to choose one SDN approach over another. It can construct a neutral platform to which different SDN approaches may be plugged in. But that makes OpenStack different from the big open source projects where someone at the head

Talk about hyperspeed, not just hyperscale. Containers and Docker barely had time to enter the vocabulary before we had a security scare, and now people want it on Hyper-V. OpenStack hasn't even gone mainstream and it's already seen as stuck. Ubuntu went from Linux geek desktop of choice to curing cancer.

Who can keep up? (Except Charlie Babcock of course)
Reply  |  Post Message  |  Messages List  |  Start a Board

Are we really headed for three hyper-scale cloud providers dominating the IaaS market? Let's hope not. But Scott Guthrie sees Microsoft as one of the Big Three a few years from now. There's a possiblity he's right.
Reply  |  Post Message  |  Messages List  |  Start a Board
InformationWeek Is Getting an Upgrade!