New version of Linux for the containerization of cloud servers is now available on a monthly subscription basis.

CoreOS, a new version of Linux designed for running containers on masses of cloud servers, is available for the first time as a supported subscription service.

CoreOS Managed Linux is CoreOS's supported version for running on servers in Amazon's EC2, Google Compute Engine, and Rackspace, among other cloud services. CoreOS is a minimal version of Linux with a kernel, associated utilities, and little else. It amounts to about 100 MBytes of code. It can boot in 1.5 seconds out of solid-state storage, and it's designed to run hundreds of containers on a single host.

"We're the equivalent of 25 pictures on your phone," quipped Alex Polvi, co-founder and CEO of CoreOS.

CoreOS is also designed to provision Docker containers, a Linux container format that has become popular with developers over the last 15 months. CoreOS's capabilities with Docker mean that it may emerge as a challenger to Atomic Server, Red Hat's coming version of Linux for running Docker containers in the cloud. CoreOS executives said a technical support subscription for a four-way Linux server will cost about $1,000 a year, or about one-fourth of Red Hat's public price list for support.

In addition, CoreOS is open-source code that can be downloaded and used on-premises. CoreOS, the company, is based on a pay-for-support revenue model and doesn't have a proprietary offering with more functionality than the open-source code, Polvi told us in an interview.

"We can boot in one-and-a-half seconds, and our memory footprint is much smaller than traditional Linuxes," Polvi said. The fact that the company has containerization cred and is gaining traction in the cloud has not been lost on the venture capital community. The 15-employee company announced Monday that it has received its first funding from Kleiner Perkins Caufield & Byers, with follow-on investment from Sequoia Capital and Fuel Capital, for a total of $8 million.

In addition, CoreOS is bringing a different sensibility to server operating system maintenance than has been possible. Polvi drew his lessons from watching browsers evolve from the time that Microsoft Explorer seemed to be destined to be dominant. "I worked on Mozilla during a time when JavaScript was being hacked and Explorer was insecure. Every Tuesday was 'Patch Tuesday,' " he recalls. Mozilla Firefox avoided a similar fate by being more secure and patched more frequently.

"But Google Chrome trumped everybody. It just automatically updates itself. You're always running the latest version."

Server operating systems have been the opposite type of software. They're configured on a server and then left alone indefinitely. Patches are reluctantly applied due to the potential hazard of changing something that disrupts the applications running under them. 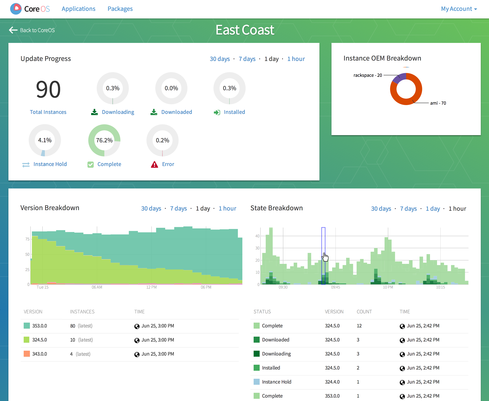 "It's the ideal setup for running your infrastructure. The smartest guys in the room are doing your maintenance. You're always running the latest version," says Polvi.

CoreOS can produce such a server system because it's learned the lessons of Google and Facebook, which run Linux containers on their cloud servers, and it's come out at a time when "there's a movement to this warehouse scale computing. We're very lucky to be part of the next generation."

In addition, CoreOS's staff has cloud engineering experience. Polvi is the co-founder and former CEO of Cloudkick, maker of a server management platform, acquired by Rackspace in 2010. After the acquisition, he headed Rackspace's Bay Area R&D effort until leaving to found CoreOS.

He is joined by Brandon Philips, former manager of the Linux kernel at Novell/Suse; Jonathan Boulle, engineer in cluster management at Twitter; Blake Mizerany, one of the first engineers hired at Heroku; and Brian Waldon, project team lead of Glance in the OpenStack project. (Glance manages virtual machine images in OpenStack.) Polvi says CoreOS's small staff is primarily made up of engineers with similar backgrounds.

CoreOS is considered by some observers to be a fork of Google's Chrome OS system, customized for Linux server management. The system is so small because container workloads contain part of the Linux operating system themselves, the user-space parts needed by the application. But all kernel functions, such as scheduling processes and memory management, are the function of the host system and shared by whatever number of containers is running on the host. Containers also leave each workload isolated from the others in a manner that's sometimes described as "lightweight virtualization."

CoreOS leaves out all the desktop and end-user oriented features of Linux in favor of being a minimal server system. Unlike Red Hat Enterprise Linux, Suse, and Ubuntu, it has no package manager scrutinizing open-source code modules for possible incompatibilities. Since each workload runs in its own container, it's up to Docker to enforce correct package management.

CoreOS will also run on service providers BrightBox Cloud, Vultr VPS, and VEXXHost Cloud. It will also run under OpenStack, Eucalyptus Systems, and other private-cloud configurations, according to information on the company website.

You're mistaken if you think you can execute in the cloud without using software to orchestrate application lifecycles. Here are four reasons you must. Get the new Cloud Automation Tech Digest today. (Free registration required.)

Charles Babcock is an editor-at-large for InformationWeek and author of Management Strategies for the Cloud Revolution, a McGraw-Hill book. He is the former editor-in-chief of Digital News, former software editor of Computerworld and former technology editor of Interactive ... View Full Bio
We welcome your comments on this topic on our social media channels, or [contact us directly] with questions about the site.
Comment  |
Email This  |
Print  |
RSS
More Insights
Webcasts
The Failures of Static DLP and How to Protect Against Tomorrow's Email Breaches
How Elite Analyst Teams are Transforming Security with Cyber Reconnaissance
More Webcasts
White Papers
All In, Online Gaming & Gambling
The State of Threat Detection and Response
More White Papers
Reports
How Data Breaches Affect the Enterprise (2020)
The Future of Multi-Cloud Networking 2020
More Reports

I agree. It's also got a large development base so there's a lot of help out there from the Open Source world moving forward.
Reply  |  Post Message  |  Messages List  |  Start a Board

Thanks a lot for sharing such a valuable information source. I do believe Linux will have bright future and become a strong competitor to Windows. Previously Linux is loved by technical guys due to lack of support and applications. But this has changed a lot in the past decade.
Reply  |  Post Message  |  Messages List  |  Start a Board

Absoultely right! Linux will definitely give tough competition to Windows OS. It is just the beginning. Well, as a Linux aspirant I recently go through some Linux practice based hands on modules available free of cost at http://blog.trueability.com/2014/06/benchmark-your-skills-with-self-assess/
Reply  |  Post Message  |  Messages List  |  Start a Board

I think Linux can play well in this Container As A Service game. It has a stable kernel and robust framework. Without too high operation and maintenance cost, it's average fee can be kept at low level and foster a healthy business.
Reply  |  Post Message  |  Messages List  |  Start a Board

Linux is pretty solid & with the minimal packages, it shouldn't crash very often. So the support usage shouldn't be too high. My guess is that they're targeting the masses hoping that the law of large numbers works in their favor. That $1K/m can add up nicely if the incident counts stay low.
Reply  |  Post Message  |  Messages List  |  Start a Board

If you can automate what CoreOS is talking about automating, then no, Laurie, not surprised by the pricing model. An awful lot of technical support costs will go away if you control and constantly update the system. Of course we haven't managed servers that way in the past. It's been much more of an approach of patching infrequently and very carefully. I still have doubts that every shop is eager to grant CoreOS the right to update its running production systems, Maybe when they get to 30 employees.
Reply  |  Post Message  |  Messages List  |  Start a Board

Charlie, are you surprised by this pricing model at all? Or does it seem to be the way forward.
Reply  |  Post Message  |  Messages List  |  Start a Board
Editors' Choice
Hot Topics