Co-founder Solomon Hykes reflects on the startup's roots in Paris, its failed first effort to get containers moving, and how Docker then became a fast-growing data center hit. 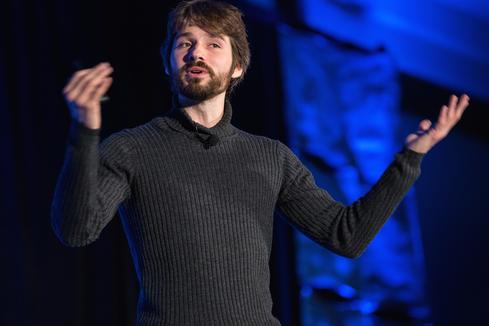 company builder, and the team chose Ben Golub, former CEO of Gluster and Plaxo. The stage was set: the Linux kernel now supported containers, and the reorganized Docker team had pivoted just in time to catch a new momentum. Developers were taking an interest in droves.

Red Hat normally lags in adding new Linux kernel features, in order to keep Red Hat Enterprise Linux as stable as possible. With Docker, Red Hat was leading in adding a new feature. Hykes was a guest onstage of the Red Hat West Coast summit as the two parties announced a partnership and a special version of Red Hat Enterprise Linux, Atomic Host, to run containers. The upcoming RHEL version 7 kernel would also support Docker, a move that to many developers denoted containers' growing importance. Paul Cormier, president of products and technologies, told developers that Docker would become a feature of its OpenShift PaaS and containers would one day emerge as a lighter weight vehicle than virtual machines for moving workloads into the cloud.

Google, with 10 years' experience with using containers to run its internal operations, makes open source its container-scaling system Kubernetes --the software that provisions a set of virtual servers to run a container. Kubernetes standardized on the Docker format. Microsoft joined the usual suspects lining up behind the project. Until now, containers have always been "Linux containers." Microsoft wants to make Docker containers available to millions of .net developers.

At VMworld in San Francisco at the end of August, VMware CEO Pat Gelsinger and CTO Ben Fathi explained that containers and virtual machines work better together. VMware officials announced plans to include container management into its vSphere virtual machine management system. For security reasons, containers work best when they're running in a virtual machine, especially in a multi-tenant environment, they point out. Docker CEO Ben Golub adds that Docker will cooperate with VMware to insure containers and VMs work together.

Docker's first grant funding was a mere $17,000 from Y Combinator, the Palo Alto startup incubator, as the firm shifted from Paris to Silicon Valley. Those funds gave the fledgling company enough money to organize its office and get its container story out to venture capital firms. After a small series A round, it announced a $40 million round led by Sequoia Capital, with Benchmark Capital, Greylock Partners, Insight Ventures, Trinity Ventures, and Yahoo founder Jerry Yang participating.

Amazon jumped on the Docker bandwagon with Amazon Container Service, to launch Docker containers on EC2. "Developers love containers," said CTO Werner Vogels from the stage in Las Vegas. The sentiment wasn't news, but Amazon saying so was. In early 2015 Amazon added a container registry service.

When Docker first moved to the US, the French engineers who made up the original small team -- and their significant others -- had little interest in moving from Paris to live in Palo Alto, Hykes says. So Docker took up cramped offices in San Francisco's Financial District. As the number of employees crept toward 100, it was so cramped you had to reserve the fire escape days ahead to hold a meeting. In 2015 Docker moved into spacious, grown-up offices in a remodeled 475 Brannon Street building. Docker has gone from the original five to eighty software engineers.

In September, there were 35,000 Docker containerized apps stored on the DockerHub, the site that Docker hosts on which users may store and share their work with Docker. Today, six months later, there are 71,379.

Containers are becoming the basis of a new way to build applications as micro services, each service running in its own container. And containers work for development in the cloud as well. "By the end of 2012, there was no player that mattered in PaaS that wasn't using containers," recalls Hykes. And those PaaS platforms agreed Docker was the container to use. That combined with Google's public blessing based on its long use of Linux containers set the stage for Docker to seize the lead of container formatting and management.

Hykes recently agreed to slow releases of Docker from once a month to once every two months because Linux distributors were complaining of too many updates to their code base. But Docker development is likely to continue at a rapid pace.

"I didn't want us to be remembered as the team that was in a position to establish a standard, then blew it by not doing the right things," Hykes says.

Attend Interop Las Vegas, the leading independent technology conference and expo series designed to inspire, inform, and connect the world's IT community. In 2015, look for all new programs, networking opportunities, and classes that will help you set your organization's IT action plan. It happens April 27 to May 1. Register with Discount Code MPOIWK for $200 off Total Access Conference Passes.