Exar Corp., the Fremont, Calif., chip maker, needed to upgrade its Oracle database at a time of cost reduction and transition. Here's how it moved it to the AWS cloud.

When Exar Corp., a chip maker producing high performance, integrated circuits, wanted to upgrade from Oracle 11 to Oracle 12, it did so in an unusual way: By migrating to Oracle in the Amazon Web Services EC2 Cloud.

The company, founded in 1971, is a well-established producer of analogue, mixed-signal processing silicon. But revenue from its regular telecommunications market has been in a slow decline. Changing demand has pushed it to move much of its manufacturing operations to China over the last two quarters and seek to reduce its costs, according to CFO Ryan Benton, who spoke during the firm's fourth quarter earnings report on May 11.

The firm is in a management transition as well, with Board Chairman Richard Leza serving as interim CEO. A new CEO will be installed by the end of the month, he said during the earnings report.

Under these conditions, Vice President of IT Renato Siljeg wanted to migrate his Oracle database systems from Oracle 11i to Oracle 12R. 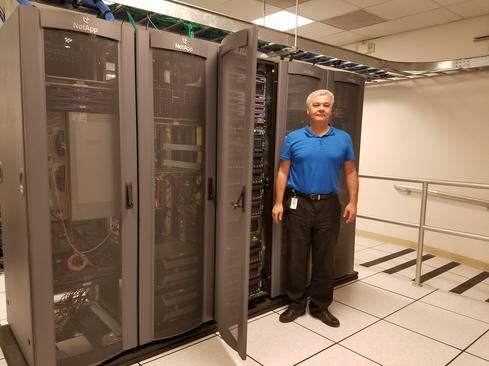 Renato Siljeg, Exar's vice president of IT, standing in one of the company's data centers.

Part of Exar's transition had just included the sale of the company's Fremont, Calif., headquarters and campus and a shrinking of its available leased-back space. In addition, doing a typical database migration would require purchasing fresh hardware along with weeks of preparation for the move. He needed to execute the upgrade more quickly if it was going to get it done in the midst of the company's transformation.

Siljeg concluded it was time to move to Oracle 12R in the Amazon Web Services cloud.

That would shift a capital expense into Amazon's hourly operational charges and help Siljeg's department through the transition period. But the six-year-old version of Oracle 11i and related business applications were running on non-standard, 32-bit Linux servers in the Exar data center.

To move to the cloud, Siljeg was going to have to switch to the 64-bit Linux servers that run the Amazon cloud.

To do this in a short time frame, he turned to a third-party knowledgeable in the migration of legacy systems, CloudVelox. The firm was able to "migrate us very fast, over two days," he said. The move included the movement of 2TB of data between Fremont and the AWS West facility in San Jose. That transfer was accomplished over the high speed networking available to companies in the Silicon, not by trucking disks, Siljeg told InformationWeek in an interview.

At the end of seven days, the IT staff knew it could be up and running with Oracle systems at any point it had to be, but it spent another seven days on testing and verifying that the database system and applications were running as planned, he said.

Prior to the actual move, CloudVelox used its automated system to survey Exar's Oracle Financials, Inventory and Work in Process Management, Purchasing and Shop Floor Management applications, and build blueprints of them that captured their dependencies.

In addition, there was "a medium-sized" Oracle database system along with a custom application, Teqvas, which served as the integration system between the Oracle applications and Exar's external supply chain. Four large servers running the database and applications were converted into four large virtual machines running Oracle 12R and the applications in the AWS cloud.

"CloudVelox was able to detect our infrastructure on-premises and rapidly configure that infrastructure in the Amazon cloud environment," Siljeg said. It did so achieving "the same level of performance" that Exar application users were accustomed to, smoothing the path of the transition, he said.

The migration was accomplished without either party executing an exhaustive inventory of the Exar infrastructure, "something we were really surprised at," he added.

An Exar IT systems administrator and Unix administrator needed to be dedicated to the project but Siljeg said it was executed within the IT's staff's existing skill set and ongoing business operations. CloudVelox, along with its automation, needed to invest a day's manual work in preparing the migration from Oracle 11i to Oracle 12R in the cloud, an amount of time that kept Siljeg within his compressed time frame. Instead of eight weeks, the database migration was accomplished in two, "a very significant times savings," he said.

In addition, CloudVelox built the Amazon-level of security into the data handling that remained behind on-premises, so that Exar data center data could be used fluidly with the cloud-based applications.

For the 40 business users affected by the migration, "the feedback we got was that the new environment was completely transparent to them. They wouldn't know they were in the cloud if we hadn't told them," he said. The provisioning of servers needed by business users was speeded up by a factor of 4-5X and the speed of projects relying on the Oracle applications was also faster, he concluded.

In addition, instead of maintaining a separate disaster recovery facility in Sacramento, Exar is considering moving that operation into the cloud. This could also lead to improved recovery time. Siljeg estimates his current DR system will allow the company to recover in two days.

An AWS-based system would cut costs and still allow a recovery time of one hour, he said.

As for other expenses, Exar is staying at the break-even point in its IT budget after the migration and as operations continue, Siljeg expects there will be significant savings. "IT will look like a profit center instead of a cost center," he claimed.

The cloud's operational economics favor a company with fluctuating demand, like Exar. "We are in the business of research and design of integrated circuits. That means we need to do a lot of simulations," which call for the use of server clusters, without requiring them to be available 24 hours a day. The main savings comes in the form of unexpended capital purchases. "You don't purchase equipment that you're not able to utilize full time," he noted.

Exar will gradually move more of its production systems into the cloud but will maintain its own data center for the foreseeable future. With all the changes going on as the company re-focuses -- Exar's top 20 products are now produced in China -- Siljeg said he is glad he has the AWS environment as a standard reference point. He'll be avoiding highly custom applications that run on non-standard Linux servers and "not investing money in a proprietary skill set" he may not need in the future.

For now, the AWS environment represents "an efficient way to upgrade and meet cost requirements," he said.

Exar chips are used in consumer devices, sensors, controllers, signal conditioning devices, and video processing. Many of its chips are identifiable through a name that starts with the letters XR in front of a number.

Charles Babcock is an editor-at-large for InformationWeek and author of Management Strategies for the Cloud Revolution, a McGraw-Hill book. He is the former editor-in-chief of Digital News, former software editor of Computerworld and former technology editor of Interactive ... View Full Bio
We welcome your comments on this topic on our social media channels, or [contact us directly] with questions about the site.
Comment  |
Email This  |
Print  |
RSS
More Insights
Webcasts
Key technology trends in 2021 - Making these technologies work for your business
Optimizing App Performance in the Cloud
More Webcasts
White Papers
Why Add Security to Your Skill Set and How to Do It
Balancing Hybrid Storage as Part of a Hybrid Cloud Data Management Strategy
More White Papers
Reports
Improving Security by Moving Beyond VPN
Building an Effective Cybersecurity Incident Response Team
More Reports

Amazon Web Services will gladly migrate you away from Oracle to its edition of MySQL, the cloud-scale Aurora system. But it will also be happy to run your upgraded system, if that's the course you choose.
Reply  |  Post Message  |  Messages List  |  Start a Board
Editors' Choice
Hot Topics

CRM Trends 2021: How the Pandemic Altered Customer Behavior Forever Jessica Davis, Senior Editor, Enterprise Apps,  2/18/2021
White Papers
Why Add Security to Your Skill Set and How to Do It
Accelerate Threat Resolutions with DNS
The Hidden Security Risks of APIs: How to Protect Your Brand, Business, and Data
Don't Let the Past Obstruct Your Zero-Trust Future
Data Orchestration: Critical Elements for Data Strategy and Infrastructure

More Informa Tech Live Events
Zero Trust for a Work-From Home WorldDetecting and Preventing Insider Data LeaksCybersecurity's Next Wave: What You Should Know