A week after HP announced it was killing off its Helion public cloud, it has come out with a new release of OpenStack Helion for on-premises.

HP has taken a step back from its Helion public cloud offering, but it remains active in helping enterprises build out their own clouds. And to further the goal of private OpenStack clouds, on Oct. 28 it launched the 2.0 version of Helion, its OpenStack distribution.

"Customers have told us they need help in making OpenStack easier to deploy and manage over time," said Jay Jamison, VP of product marketing for HP Cloud, in an interview. HP aims to do that in several ways.

Jamison emphasized that Helion is "an enterprise-grade cloud platform," countering frequent criticism that OpenStack it is both rapidly evolving and difficult to implement.

One of the main ways Helion 2 aims to make cloud instances easier to implement is by using a virtualized network for Helion virtual servers through the Nuage Networks Virtualized Services Platform. The platform brings Nuage software-defined networking to the OpenStack instance provisioning process, allowing a network segment that meets the needs of the application to be assigned as it is provisioned.

Nuage might seem like an odd choice since it's used by only 1% of OpenStack implementers for network provisioning under the OpenStack Neutron network module, according to a survey conducted in May at the OpenStack Summit.

Jamison said HP builds its Helion off "a plain vanilla release of OpenStack," adding HP features like the Nuage networking option but remaining "fully compliant with the core OpenStack code."

HP hardens its version, closing all networking ports except those specifically needed by provisioned applications, rather than using the default, "all ports open" approach. HP offers 24-hour support for Helion, is a frequent contributor to the OpenStack project, and bases its distribution on code that is one step removed from the latest release. The most OpenStack code is the Kilo release, which came out April 30. Helion 2.0 is based on the Juno release, which came out in October 2014. 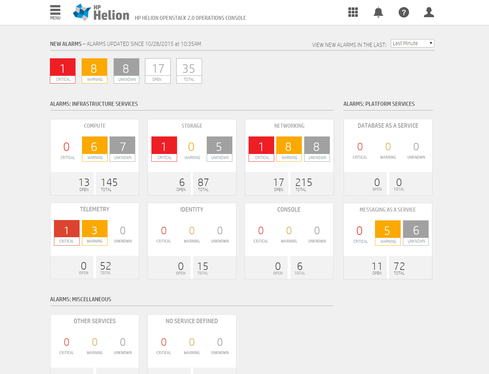 "The Juno release is stable and robustly tested and has been in the hands of many beta users. It's had time on the track," said Jamison.

The 1.0 release of Helion couldn't be updated without an interruption in operations. Helion 2.0 can get security updates without any cloud application downtime, he said.

The Triple O installer used in Helion 1.0 has been replaced with an installer based on open source orchestrator Ansible, recently acquired by Red Hat.

Jamison noted that Gartner ranks HP a leader in the private cloud market and OpenStack implementers should realize that "the full weight and commitment" remain behind its private cloud and hybrid cloud initiatives, even though it will shut down the Helion public cloud on Jan. 31, 2016.

The closing of HP's Helion public cloud service will leave one fewer source of OpenStack as a public cloud. Rackspace remains a supplier, and several regional cloud providers are OpenStack-based, Jamison said.

Charles Babcock is an editor-at-large for InformationWeek and author of Management Strategies for the Cloud Revolution, a McGraw-Hill book. He is the former editor-in-chief of Digital News, former software editor of Computerworld and former technology editor of Interactive ... View Full Bio
We welcome your comments on this topic on our social media channels, or [contact us directly] with questions about the site.
Comment  |
Email This  |
Print  |
RSS
More Insights
Webcasts
The Failures of Static DLP and How to Protect Against Tomorrow's Email Breaches
Building the SOC of the Future: Next-Generation Security Operations
More Webcasts
White Papers
2020 Cybersecurity Report Card
The Essential Guide to Securing Remote Access
More White Papers
Reports
Special Report: Edge Computing: An IT Platform for the New Enterprise
DNS Network Traffic Volumes During the 2020 Pandemic
More Reports