HP announced Friday that its CloudSystem 8 is generally available. It's a converged system, with hardware and nearby storage in the rack, virtualized and ready to go for either private cloud operations or general purpose, virtualized infrastructure.

Margaret Dawson, HP cloud evangelist and VP of product marketing, talked about HP's position in the cloud -- and CloudSystem 8 in particular -- in an interview Thursday at Interop (run by UBM Tech, InformationWeek's parent company). CloudSystem 8, she said, is based on HP Converged System 700 or 700X racks of server blades, disks, and switches. It's HP's way of bringing the right combination of infrastructure elements together to support large-scale VMware virtualization in the enterprise.

"HP has consolidated its position as a leader in private cloud computing," said Dawson, citing a recent Forrester Research report. HP's approach is different from all-proprietary approaches in that it is a heavy contributor of code to OpenStack -- ''We're always among the top five contributors" -- and relies on its version of OpenStack, dubbed Cloud OS, to provide the end-user with self-provisioning, usage tracking, and chargeback. Among the OpenStack projects that it contributes to are Neutron software-defined networking and the Horizon management dashboard.

"There's a lot of confusion around integration, interoperability, and openness," Dawson noted. Relying on point-to-point connectors to get into a proprietary cloud "is expensive and complex and may not feed into a broader architecture," she said. She didn't name HP competitors, but both Amazon Web Services and VMware's vCloud Hybrid Service might be candidates.

[There's a lot of commotion about the cloud: What Is Platform-As-A-Service? Experts Disagree.]

If CloudSystem 8 relies on VMware for virtualization, it also relies on OpenStack for private cloud computing. HP recommends drawing a line on VMware proprietary software at the enterprise's edge when moving out into the public cloud. "We look to use open APIs instead of continuing the reliance on proprietary connections," said Dawson. 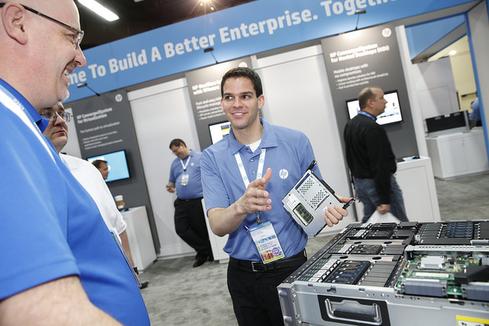 So what's in CloudSystem 8 for enterprise private clouds, in addition to the HP blades, disks, and switches? Basically, it's HP's setup for the enterprise to use VMware virtualization, while taking advantage of hybrid cloud operations. The public side of a hybrid cloud under HP's arrangement will be some OpenStack-based cloud and, most likely, the HP Cloud, one of the largest existing OpenStack implementations.

Dawson said HP's Cloud OS has moved toward a more consumer-inspired end-user interface for CloudSystem 8, based on OpenStack's Horizon project, to make it easier to self-provision servers and related resources. It also makes it easier for administrators to see and manage resources, whether they're in the private or public cloud. HP offers a self-service portal, its Service Marketplace, where users may click through choices to launch servers with particular applications. The Horizon dashboard permits users to request servers. It also allows administrative management of instances, server images, the number of servers needed and in use, storage volumes, and networks.

Charles Babcock is an editor-at-large for InformationWeek and author of Management Strategies for the Cloud Revolution, a McGraw-Hill book. He is the former editor-in-chief of Digital News, former software editor of Computerworld and former technology editor of Interactive ... View Full Bio
We welcome your comments on this topic on our social media channels, or [contact us directly] with questions about the site.
Comment  |
Email This  |
Print  |
RSS
More Insights
Webcasts
Making XDR Work in Your Enterprise - May 12
Multi-Cloud Data Management for Modern Applications
More Webcasts
White Papers
Enabling Enterprise Resiliency Through Cyberthreat Detection
Global software company contracts with CBTS for Virtual CISO
More White Papers
Reports
The State of Cybersecurity Incident Response
Protection Strategies for a Cyber-Resilient Organization
More Reports

HP had 1,900 beta users of CloudSystem 8 from December through March, before this April 4 launch, said Margaret Dawson, cloud evangelist. The CloudSystem may have appeal in China, where HP now has a large presence through a Chinese partner company,
Reply  |  Post Message  |  Messages List  |  Start a Board
InformationWeek Is Getting an Upgrade!