HP Enterprise is bringing out its Gen9 Proliant servers with a non-volatile form of memory modules that extend server memory.

HP Enterprise is embedding a new form of memory in its next-generation ProLiant Gen9 servers to create a hardware building block for private clouds and other data-intensive enterprise uses.

HP has dubbed the category, which its Non-Volatile Dual Inline Memory Modules (NVDIMMs) belong to, "persistent memory," an emerging memory category with the persistence characteristic usually associated with tape, spinning disks, or USB-like devices built on solid-state flash. At the same time, the NVDIMMs have the speed of dynamic random access memory (DRAM) on the server.

The NVDIMMs' memory modules are DRAM-style memory with an automated ability to capture and persist volatile data, as needed, say in the event of a power outage. So they can be used with sensitive and frequently changing data, held in a large cache without the risk of losing that data in a power failure.

The NVDIMMs sit on the ProLiant's internal memory bus and can be used as a supplement to random access memory for caching, in-memory database operations, analytics, or other data-intensive uses requiring high speed I/O.

As NVDIMMs become generally available on servers, they'll enable a new era of "memory-driven computing," a type of computing that can toss out thousands of lines of software instructions regarding how to manage memory with a given application, said Bret Gibbs, persistent memory product manager at HPE.

Instead, a few lines of code will invoke NVDIMM use without risk of losing large amounts of data in the event of power loss or other failure. 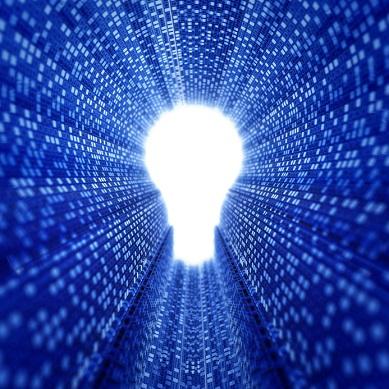 HPE is claiming its Gen9 ProLiant servers, which the company officially announced March 31, are its first to include NVDIMMs designed into the server. The memory modules operate on the internal memory bus, connecting DRAM server memory to the CPU. Their persistence comes from having a NAND flash backup layer directly associated with the NVDIMMs. The NAND flash isn't used until it's needed to save the data in the NVDIMMs, said Gibbs.

NVDIMMs have been available from various manufacturers for several years, designed into storage appliances and devices meant to be attached to a server and make use of its PCI Express bus for external devices. Such configurations have the same characteristics as NVDIMMs in terms of their ability to execute fast reads and persist data. But they also have longer latencies due to their greater separation from the server CPU and memory.

Gibbs gave an example of the reduced latencies in an interview with InformationWeek.

A test used 400GB of SSDs versus 8GB NVDIMMs to store log events using the log function for Microsoft SQL Server transactions. It yielded 970,000 transactions logged per minute with SSDs, versus 1.08 million per minute with the NVDIMMs. Perhaps more important was the reduced latency of the NVDIMMs. With the SSDs, write-speed latency was 372 millionths of a second, which was reduced to less than half -- 181 millionths of a second -- with the NVDIMMs.

Until now, SSDs attached via the PCIe bus "were the fastest tier of storage available today" on an HP x86 server outside the server's embedded DRAM. Persistent memory in the form of NVDIMMs will take over that distinction, predicted Gibbs.

Sixteen 8GB NVDIMMs can be fitted into a single ProLiant 360 or 380 server, giving it a total of 128GB of DRAM-like memory, all safely backed up by NAND flash. The associated NAND flash sits in the drive bay on the front of the server for ease of access and replacement. It's powered by HPE's 96-watt lithium ion battery that's built into the server as an emergency power supply.

By reserving the NAND memory for emergency backup of data, it will be used infrequently and will be less likely to wear out over the normal life of a server, added Gibbs. NVDIMMs may be cycled through many hundreds of thousands of read/write uses without being in danger of failure.

Gibbs said the HPE persistent memory will be teamed up with Intel x86 E-5 Broadwell v4 Xeon processors on the Proliant Gen9 servers. Each server will have up to 22 Broadwell cores. They will offer a 21% performance gain and a 19% reduction in electricity consumed over the previous generation.

HP was named by Synergy Research as a leading provider of servers and storage for both public and private enterprise cloud infrastructure. Gibbs said the new Proliant servers will be suitable for general purpose enterprise uses, as well as the concentrated virtual machine-hosting infrastructure of a public or private cloud.

Charles Babcock is an editor-at-large for InformationWeek and author of Management Strategies for the Cloud Revolution, a McGraw-Hill book. He is the former editor-in-chief of Digital News, former software editor of Computerworld and former technology editor of Interactive ... View Full Bio
We welcome your comments on this topic on our social media channels, or [contact us directly] with questions about the site.
Comment  |
Email This  |
Print  |
RSS
More Insights
Webcasts
Building Asset Management into Your Enterprise Security Strategy
Take DevOps to the Next Level
More Webcasts
White Papers
WhiteHat Professional Services Package
The Five Major Security Pitfalls of WFH and How to Solve Them
More White Papers
Reports
Assessing Cybersecurity Risk in Todays Enterprises
The Malware Threat Landscape
More Reports