IBM promised 40 SoftLayer cloud data centers globally by the end of 2014. Through a partnership with Equinix, it's ending the year with 49.

8 Tech Turkeys To Avoid As Gifts
(Click image for larger view and slideshow.)

IBM's SoftLayer cloud unit will finish the year with its promised 40 data centers around the world, plus nine add-ons that it will obtain through a partnership with Equinix for use of its facilities, for a total of 49.

IBM announced Wednesday that it has opened SoftLayer public cloud facilities in Frankfurt, Mexico City, and Tokyo. IBM acquired SoftLayer in 2013 for an undisclosed amount.

In addition, its agreement with Equinix gives it a presence in Washington, D.C., Chicago, Dallas, and Silicon Valley in the US. In Europe, the SoftLayer cloud is available at Equinix data centers in Amsterdam and Paris. In the Asia-Pacific region, it's now available through Equinix in Sydney, Singapore, and Tokyo.

IBM entered 2014 determined to show it was committed to establishing a larger presence in public cloud services, something that its actions up to that point had left in doubt. It talked about "enterprise cloud any way you want it" in 2011. In 2013, it acquired an aggressive young cloud services supplier, SoftLayer, which was amassing customers but dealing with smaller organizations than was typical of IBM's own customer base. Brought inside IBM, it's been retooled into more of an enterprise-compatible service.

IBM said it would spend $1.2 billion in 2014 establishing broader cloud services and adding 15 data centers to the 25 operating under the IBM and SoftLayer labels. As an example of IBM's current global reach, some of those data centers are in Mumbai, London, Beijing, Hong Kong, Melbourne, Toronto, and Raleigh, N.C.

"We've experienced $4 billion in client wins since [the start of] November," Angel Diaz, vice president of cloud performance solutions at IBM, said in an interview. Some of that business came from Lufthansa in Germany; ABN Amro in the Netherlands; WPP in the UK; Woox Innovations in Hong Kong; and Dow Water and Process Solutions, a unit of the Dow Chemical Co., and Thomson Reuters in the US. "We've done more than what we said we would. Demand is so high, we're running as fast as we can go." 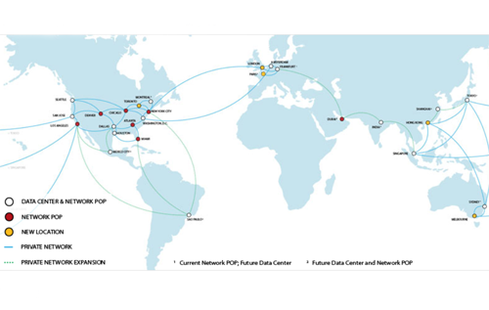 IBM ended 2014 with a larger number of data centers than expected.

One of IBM's calling cards for prospective cloud users is its Bluemix development platform on top of SoftLayer infrastructure, its implementation of the open source Cloud Foundry platform-as-a-service. IBM has added its tools and software to the development platform, which originated in VMware and the VMware/EMC spinoff, Pivotal. IBM is a major contributor to Cloud Foundry and OpenStack code, which helps it look like a reliable partner to companies adopting those options.

Bluemix is available through each SoftLayer location, Diaz said. IBM also offers 99.99% uptime with its cloud services, compared to Amazon's 99.95%. If a customer's system goes down, IBM said in its Dec. 17 announcement, support teams "can recover data in minutes to insure that it has little to no impact on business operations."

In addition, more so than an Amazon, Microsoft, or Google, SoftLayer offers bare metal servers to run enterprise legacy applications.

In September, in another move to attract mission-critical enterprise business, IBM opened a cloud resiliency center in Research Triangle Park, N.C., to provide high-level business continuity capabilities to customers using its cloud services. It's intended to supply state-of-the-art techniques in cloud use for companies that can't afford downtime for a cloud-based system.

At the same time, IBM must play catchup with Amazon Web Services, which is finding numerous enterprise customers of its own with its growing set of cloud services. Amazon started offering infrastructure-as-a-service in 2006. IBM showed that it was serious about IaaS with its June 2013 acquisition of SoftLayer. IBM is showing greater finesse at addressing enterprise concerns about security and continuity; Amazon and Google are showing experience in supplying low-cost automated services and container services, along with virtual machines.

Does your resiliency plan take into account both natural disasters and man-made mayhem? If the CISO hasn't signed off, assume the answer is no. Get the Disaster Recovery In The APT Age Tech Digest from Dark Reading today (free registration required).

Charles Babcock is an editor-at-large for InformationWeek and author of Management Strategies for the Cloud Revolution, a McGraw-Hill book. He is the former editor-in-chief of Digital News, former software editor of Computerworld and former technology editor of Interactive ... View Full Bio
We welcome your comments on this topic on our social media channels, or [contact us directly] with questions about the site.
Comment  |
Email This  |
Print  |
RSS
More Insights
Webcasts
The Experts Guide to Ransomware Response
Multi-Cloud Data Management for Modern Applications
More Webcasts
White Papers
The Path to Successful Hyperautomation Starts With the Help Desk
Are We Cyber-Resilient? The Key Question Every Organization Must Answer
More White Papers
Reports
Intelligent Outcomes Are Key to Business Resilience
2021 Application Security Statistics Report Vol.2
More Reports

It's possible the cloud industry is beginning to show obsessive-compulsive disorder when it comes to counting up a global presence. With small cloud suppliers, a new cloud data center amounts to their host servers placed in a less than full server cage at a co-location site. The nine IBM locations inside Equinix facilities are something similar. There may be 10,000 servers in each or there may be 100, IBM declined to say. But the location is still valuable because it has the Equinix meet-me room where 40-60 network providers offer a connection point. Private line access points are a big asset in the SoftLayer cloud. Enterprises are trying to keep their prize data and software off the Internet.
Reply  |  Post Message  |  Messages List  |  Start a Board

The powers that be at IBM must not be plagued by OCD. I know a lot of people who would even deny having that condition that would be irked no end by a number like that. They would say it is incumbent on the company to add one more as soon as possible.
Reply  |  Post Message  |  Messages List  |  Start a Board
InformationWeek Is Getting an Upgrade!