IBM moves flash storage inside the box -- 12.8 TB of it -- to work alongside RAM and cut data movement latencies.

IBM has unveiled what it calls its next generation of cloud and big data servers, the X6 series. The x86-based line will run Intel's latest Ivy Bridge processor in four- and eight-way configurations and will be packed with flash memory.

IBM has used flash or solid-state drives as adjuncts to spinning disks and RAID arrays outside the server. However, now it has migrated flash inside the server case. To do so, it had to redesign flash memory sticks to fit into the random access memory's dual-inline memory slots on a server's motherboard. It then designed motherboards with room for 12.8 TB of flash, as well as 6 TB to 12 TB of RAM.

That's a first for IBM and a first for the industry, IBM spokesmen said. By redesigning how solid-state memory fits into the server, IBM can add more of it than competitors and can produce a larger combination of RAM and flash, which have similar performance characteristics, inside the case. That, in turn, will allow for high-speed I/Os and applications designed for maximum performance when exposed to multiple TBs of flash and RAM.

The advantage of having flash alongside the RAM is that the data on the flash modules stays there when the server is shut down and is available as soon as it's started up. All the contents of a database system or NoSQL system such as MongoDB can remain instantly available and close to the CPUs. RAM and flash storage share the same memory channel inside the server case, resulting in low latencies.

[Want more on the use of solid state in cloud servers? See Rackspace Adds SSDs To Cloud Servers.]

In general, system operations speed up when large flash storage devices are outside the server because they can quickly upload data without going through the seek time required by the head of a spinning disk drive. Putting flash storage inside the case results in a 10X performance improvement over flash outside the case.

Stuart McRae, high-end System x business line manager, told us IBM's X6 server line can load data from flash storage inside the server into RAM or CPU in 5 to 10 microseconds, compared to at least 100 microseconds for flash storage outside the case. A microsecond is one millionth of a second. 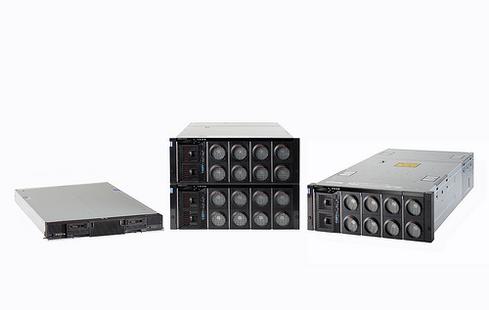 The latency between external storage and CPU is more typically measured in milliseconds, or thousandths of a second. The difference in thousandths or millionths of a second might not seem significant until one thinks of the savings accumulated over and over again in each operation of the system. One microsecond is to a second, for example, as one second is to 11.5 days, McRae said. The repeated performance gain of saving 5 to 10 microseconds per data movement is large.

That data movement speed, along with new Intel Ivy Bridge processors, will make the X6 line a big data analytics and NoSQL system of choice, McRae said. It contains three times "the scalable memory" of the largest servers offered by competitors.

These products have been designed to host large numbers of virtual machines, or multiple virtualized database systems per server. That makes them a candidate for work inside cloud service suppliers, a market where IBM would like a larger share. Its x86 enterprise servers have been largely absent from the public cloud, which likes bare-bone models that are stripped of all redundant or unnecessary parts and provide easy air circulation.

In addition, IBM has designed the CPU and memory components of the X6s as "books" or modules that load into and can be pulled out of the front of the server. If the owner wants an upgrade, "you take out the book and put in new memory and CPU, without touching the rest of the system." The X6 servers will become part of IBM's x86 System x and PureSystems product lines, McRae said.

In a second announcement, IBM said it has produced the FlashSystem 840, a flash storage device to work alongside the X6 servers. It is IBM's second all-flash storage device, following the FlashSystem 820 launched in April. The 840 offers 48 TB of storage in a 2u rack device -- twice as much as the 820 -- along with twice the data movement bandwidth.

Mike Kuhn, business line executive for FlashSystems, gave us one measure of what that means: The 840 can perform 1.1 million I/O operations per second. That would support 40,000 credit card transactions per second.

The storage device, like the X6 servers, is designed to support high-volume throughput in big data applications, cloud operations, or e-commerce transactions, Kuhn told us. "A lot of people are still selling flash with spinning disks. Only a handful of people have built a flash system from the ground up." (IBM also produces storage systems that combine flash and disks.)

IBM acquired Texas Memory Systems in 2011 and used its engineering and intellectual property to produce the FlashSystem 820. The company has since expanded the Texas Memory engineering team by 400%, Kuhn said. He expects devices like the 840 to move big data applications into real-time operations, gathering reams of data on websites as thousands of users generate events, and providing feedback in time to address the users while they are there.

Kuhn and McRae said final pricing had not been determined on the X6 servers or the FlashSystem 840.

Hybrid systems that use flash to the best effect are smart - balance cost and performance. All-SSD is the future, but not the near future. Also smart is making these modular. People worry about the flash memory wearing out before the HDD, so enabling IT to swap in a new SSD module should alleviate that concern.
Reply  |  Post Message  |  Messages List  |  Start a Board
InformationWeek Is Getting an Upgrade!