Nebula co-founder Chris Kemp, known for the cloud experience he gained as NASA's CIO, will step aside as CEO to make way for Gordon Stitt, who brings an enterprise sales track record. 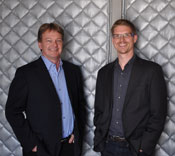 Gordon Stitt and Chris Kemp of Nebula
Chris Kemp and Devin Carlen, co-founders of OpenStack startup Nebula, have brought in an experienced executive, Gordon Stitt, to succeed Kemp as CEO.

Kemp is the former NASA CIO who built the NASA cloud, the original Nebula, at Moffitt Field in Silicon Valley. He will step into the role of chief strategy officer and member of the board. Carlen remains CTO.

"We have a tiger by the tail," Kemp said in an interview. Nebula produces a hardware controller, the Nebula One, that plugs into a server rack with two to 20 servers installed, converting them into a ready to run OpenStack Cloud. The hardware/software system is aimed at companies that want to build private clouds, without learning all the ins and outs of OpenStack, which qualifies as a work in progress. Kemp claimed interest in implementing OpenStack is ramping up.

"We beat our first-quarter revenue forecast quite handily, by 45%. We are shipping lots of systems now," Kemp said in an interview Thursday. Nebula is privately held and doesn't disclose revenue. Kemp defined "lots of systems" as "in the tens, not hundreds," per month.

The Mountain View, Calif., company has 75 employees and several seasoned executives, but Kemp acknowledged he has never led an enterprise-oriented company before. He cut his teeth inside the U.S. government, where he was CTO of NASA for IT before becoming CIO of the NASA Ames Research Center. The center had a large appetite for compute power. Instead of building out the data center, Ames built the first federal cloud in a portable shipping container. Kemp co-founded the OpenStack project with NASA's contribution of a module of cloud compute code, Nova.

Instead of becoming an internally focused CEO, Kemp wanted to keep his external focus, evangelizing Nebula's hardware-based form of cloud computing, gathering feedback from customers and continuing to offer a vision and strategy for Nebula.

"You'll hear from me. I'll be racking up a lot more frequent flyer miles," Kemp predicted. He expects to work closely with Stitt, whom he met nine months ago. The two engaged in periodic discussions on how an OpenStack startup should be managed, how it should engage partners and when to bring its products to market.

After several conversations, Kemp concluded Nebula needed to transition from an engineering and pre-product phase into one geared toward selling products to the enterprise. That would require organizing a direct sales force, creating a third-party channel and providing enterprise support. Those weren't necessarily his strengths, but they were Stitt's, Kemp said.

"Chris and I come from different backgrounds, but we look at things the same way," said Stitt, as he summarized the talks that lead him to Nebula. Stitt is the former CEO of Network Peripherals and Extreme Networks, two startups which both staged IPOs. Extreme Networks is now a publicly traded Nasdaq company. Network Peripherals was merged with another company after five years of operation.

"I've been through this early stage a couple of times. Sometimes you take the direct sales approach. Sometime you want to ramp up the channel," Stitt said. He said he will first "spend time listening" to the sales team and the engineering team "to build a more nuanced view of the company." He declined to comment further on immediate plans. "The first thing for me to do is to learn," he said.

But Stitt said he believes Nebula is poised to act as a marketplace disrupter, to be one of the agents that allows companies to get to the elasticity of a private cloud "without using a huge amount of IT skills."

Nebula recently added Mark Leslie to its board. He was the founding CEO of Veritas, who took the company from 12 employees and $95,000 a year in revenue to 6,000 employees and $1.5 billion in revenue. Dave Withers, former head of storage products at Dell, is COO. VP of engineering is Jon Mittelhauser, a Netscape Communications founder and former VP of engineering for OnLive.

Kemp said building OpenStack clouds will remain a challenge for the uninitiated due to its complex, interlocking components of varying degrees of maturity. "What did you expect? It was designed by rocket scientists," he quipped. The Nebula One is an optimized implementation of OpenStack that a customer doesn't rejigger, fine tune or otherwise touch, he said.

Learn more about what's next for the cloud by attending the Interop conference track on Cloud Computing and Virtualization in New York from Sept. 30 to Oct. 4.

We welcome your comments on this topic on our social media channels, or [contact us directly] with questions about the site.
Comment  |
Email This  |
Print  |
RSS
More Insights
Webcasts
Data Protection 101 - 12/10 @ 11am EST
The Pesky Password Problem: Policies That Help You Gain the Upper Hand on the Bad Guys
More Webcasts
White Papers
Flying Blind in Third-party Ecosystems
Exclusive IT Trend Report: Chatbots
More White Papers
Reports
2020 Trustwave Global Security Report
The ROI Of SD-WAN: Not Just A Numbers Game
More Reports

Not many CEOs depose themselves.Chris Kemp is making a smart move and his company will benefit from it
Reply  |  Post Message  |  Messages List  |  Start a Board

This seems like a smart move - in our new SDN survey, 10% said they wouldn't even bother trying to sell the benefits of SDN to the business, up (oddly) from 4% last year; 19% are going to hang their hopes on "ability to test new routing protocols." Boy, that should free up the money.
Reply  |  Post Message  |  Messages List  |  Start a Board
Editors' Choice
Hot Topics