The open source hardware movement opened its annual summit with some surprising new members and a focus on data center switching.

The Open Compute Project got a big boost of momentum this week, as Apple, Cisco, and Juniper Networks joined as surprising new members, and as HP launched a new line of servers using the open source hardware approach.

Add to that an Intel chip specially designed for commodity servers, and some new switching gear, and you can see growing support for Open Compute as it convened its annual summit in San Jose Monday.

Apple, Cisco, and Juniper are an unlikely trio to join. For the last 18 months, the Open Compute Project has been talking about creating commodity switching from standard x86 hardware and disrupting the switch market, where Cisco and Juniper are high-end market leaders who are therefore among the most likely to get disrupted. A year ago Facebook produced its first prototype for a top-of-rack switch, a unit dubbed the Wedge. Monday it contributed the design of the Wedge to the project so that anyone may reproduce it.

Apple provides a third surprising new member of the community-minded, open source hardware crowd. Apple has strongly defended its Macintosh, iPad, and iPhone hardware as proprietary hardware since inception, and it's likely to continue doing so. But Apple's success with end-user devices means the company must build more data centers to support the application services those devices use. So Apple has a big stake in lowering data center operating costs. In fact, Apple runs data centers in Prineville, Ore., not far from Facebook's massive complex, and in Maiden, N.C., not far from Facebook's Forest City site.

In addition to new member news, HP announced it's launching a line of rack-mounted servers built to the Open Compute specification, under the brand Cloudline. HP, as the leading x86 server producer, brings strong credibility to the idea that Open Compute's hardware designs have staying power. Dell has also offered an OCP-based server, but HP appears to be jumping in with both feet. It announced a three-product Cloudline server family. Until now, the producers of Open Compute hardware have been predominantly smaller, custom white box builders, such as Hyve Solutions, Quanta, Penguin, and AppliedMicro. 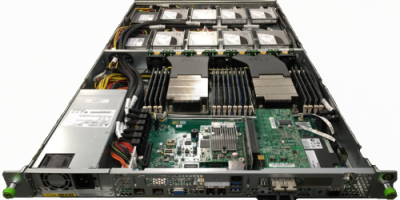 Open Compute designs strip out redundant parts, mirroring the tactics companies such as Facebook, Amazon, and Google have used to run massive data centers for Internet apps. In a highly automated data center, it's just assumed that servers will fail and the workloads will be automatically transferred to other servers to continue running. For that reason, Open Compute servers have just one power supply, not two, and a reduced number of fans.

HP will be able to deliver such servers "at very large scale, allowing customer to deploy and manage them by the 10,000 or 100,000s," said Alain Andieoli, senior VP of HP Servers. Managing a large influx of servers is easier to do through a software management system if they are all built with uniform components. In effect, the OpenStack or other cloud software governing them can tolerate hardware failures because it has built in "software resiliency. Because of that, we don't need redundant power supplies" and other components, Andieoli said.

Jay Parikh, Facebook's VP of engineering, warned that while the Open Compute Project has come a long way in its ability to produce hardware to specification, "There is still a lot more to do. We're in no way near being done." Facebook aired its prototype 6-Pack data center switch, a spine switch to collect the output of several top-of-rack switches.

"We want to make all of this stuff easier to consume for all of you," he said. Facebook has already produced an FBoss switch operating system derived from Linux and installed Wedges, FBoss, and a switching fabric in its new Altoona, Iowa, and Lulea, Sweden, data centers. Switch manufacturer Accton (and others) will take the design and fill orders for Wedge-like switches by the end of the first half, he said.

Facebook is also working with Broadcom, Cumulus, and BigSwitch to put different management features and network applications on Wedge switches.

Parikh also aired Yosemite, a system-on-a-chip using Intel 14-nanometer circuit, a D1500 chip, and a Xeon processor. It will be used to produce a single socket server that can be assembled at high density in an Open Rack, becoming "a very simple, very efficient module for us," he said. He described Yosemite as part of Facebook's mission to "disaggregate" complex servers into simpler parts, and rebuilding the rack at greater efficiency.

Charles Babcock is an editor-at-large for InformationWeek and author of Management Strategies for the Cloud Revolution, a McGraw-Hill book. He is the former editor-in-chief of Digital News, former software editor of Computerworld and former technology editor of Interactive ... View Full Bio
We welcome your comments on this topic on our social media channels, or [contact us directly] with questions about the site.
Comment  |
Email This  |
Print  |
RSS
More Insights
Webcasts
How Elite Analyst Teams are Transforming Security with Cyber Reconnaissance
Strategies for Success with Digital Transformation
More Webcasts
White Papers
A Technical Deep Dive on Software Exploits
SANS Report: Measuring and Improving Cyber Defense Using the MITRE ATT&CK Framework
More White Papers
Reports
Assessing Cybersecurity Risk in Todays Enterprises
How Data Breaches Affect the Enterprise (2020)
More Reports

I remeber asking an HP executive a year ago whether HP would produce an OCP product line. His answer was somewhar arch. HP had the capability of producing OCP-based servers if a customer asked for it. There was no enthusiasm in the response. This year, things have changed. the idea open source hardware has come a long ways.
Reply  |  Post Message  |  Messages List  |  Start a Board
Editors' Choice
Hot Topics