Rackspace, under pressure to produce more profits, on Thursday introduced single-tenant OnMetal servers for cloud users. They'll be spun up like a virtual machine in the public cloud, but they're reserved for a single customer that runs an application in a Linux container rather than a VM.

The result, said Rackspace's new president, Taylor Rhodes, is a cloud workload that comes to life quickly when activated and remains highly scalable long after a virtual machine has outlived its initial usefulness. Rhodes, who took office in mid-January, said the OnMetal servers, running the stripped down CoreOS version of Linux, will become generally available in July. He made the announcement at GigaOm's Structure 2014 conference in San Francisco.

"When you're running a small application, the multi-tenant public cloud is good. With a bigger application, performance becomes unpredictable," said Rhodes. He might have been referring to the noisy-neighbor problem that Netflix discovered on Amazon Web Services as it monitored how some of its servers performed versus others of the same caliber but on different hosts. 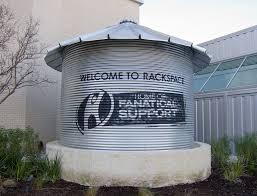 Netflix concluded from minute measures of response times and other metrics that a neighbor engaged in heavy I/O and other resource use would slow the Netflix server each minute by fractions of a second. They often caused a server performance hit of 1% or less of what was expected, but Netflix, depending heavily on Amazon for its infrastructure, detected such problems and moved its servers away from the noisy neighbors.

But not everybody has the monitoring tools and skills of a Netflix.

Rhodes said an OnMetal server may be more than needed when a customer first taps one, but that leaves its application lots of headroom with which to scale up. The server is equipped only with solid state storage, not spinning disks, another performance enhancement, he said.

A virtual machine is fine for a small company, "but when you hit the hyper-growth curve, companies start to consider co-location [where they place their equipment in a cage at an Internet hub] or building their own datacenter," he said. The specialized OnMetal server is meant to be a third alternative, with the benefits of co-location in a Rackspace datacenter but retaining the elasticity of the public cloud.

Rackspace manages the server as part of its Managed Cloud business, its legacy business in managed services.

The OnMetal servers are derived from an Open Compute motherboard design from the project started by Facebook in 2011. Open Compute hardware is modeled on Google and Amazon datacenters, which stripped redundant parts out of the server and relied on greater ambient air flow through the datacenter to cool them. Facebook implemented its own ideas for a mass-produced, cloud datacenter server, then published the specifications as an open design, while Google and Amazon have kept theirs under wraps.

Rackspace customer Zachary Rosen, CEO and co-founder of Pantheon, says his firm hosts 70,000 websites based on Drupal and Word Press. Pantheon has opted for OnMetal servers to run the 250,000 modules or applications that make up the websites, and it does so in Linux containers. The containers allow a greater density of PHP apps per host, each running isolated in its own address space.

"Can you afford to run 250,000 virtual machines? If you do, you're crazy. Containers are an order of magnitude more efficient to scale," says Rosen.

The CoreOS on the containerized host amounts to about 360 MB, as opposed to general-purpose Linux, which is usually more than double that. That makes the container faster to activate. In some cases a workload is ready to go in a minute, container advocates say.

The emergence of containers over the last 15 months, primarily with the successful founding of the Docker Linux container project, doesn't bode well for virtual machines in the cloud, according to Rosen. "The technology that you consider sacrosanct now will fall by the wayside. You can buy and use this technology more cheaply."

Pantheon's use of Rackspace OnMetal servers, positioned on the boundary between cloud computing and managed servers, will renew the debate over the future of Linux containers in the public cloud. Google recently acknowledged at DockerCon, the first Docker developer conference, held in San Francisco earlier this month, that it runs its search engine and other tasks in Linux containers. It will use them for hosting workloads on its Compute Engine public cloud, as well, it said at the time.

Red Hat has been an advocated of Docker containers and integrated Docker support into its Version 7 of Red Hat Enterprise Linux.

"Virtualization is a great tool for certain things, but not for running big applications in the cloud" said Rhodes. For that, he advised, "run Docker containers" on a bare metal host that will scale up as fast as the application's traffic.

He added that both the CoreOS and the hardware on which it runs at Rackspace will continue to be open-source projects.

Charles Babcock is an editor-at-large for InformationWeek and author of Management Strategies for the Cloud Revolution, a McGraw-Hill book. He is the former editor-in-chief of Digital News, former software editor of Computerworld and former technology editor of Interactive ... View Full Bio
We welcome your comments on this topic on our social media channels, or [contact us directly] with questions about the site.
Comment  |
Email This  |
Print  |
RSS
More Insights
Webcasts
Data Protection 101 - 12/10 @ 11am EST
Defense and Response Against Insider Threats & User Errors
More Webcasts
White Papers
Your Security Team's Practical Guide to Implementing Automation
The Malware Threat Landscape
More White Papers
Reports
The State of Cloud Computing - Fall 2020
Meetup Vulnerabilities: Escalation of Privilege and Redirection of Funds
More Reports

Digital business isn't about changing code; it's about changing what legacy sales, distribution, customer service, and product groups do in the new digital age. It's about bringing big data analytics and the broker stockpairitalia.com , mobile, social, marketing automation
Reply  |  Post Message  |  Messages List  |  Start a Board

Taylor Rhodes got his message across succinctly, with some helop from Zack Rosen. And it's a fit for a company making the transition from managed servers to self-provisioned servers. The OnMetal server is something midway in between, with performance benefits. Rhodes said Rackspace will differentiate on the services it adds to cloud attributes.
Reply  |  Post Message  |  Messages List  |  Start a Board

Taylor Rhodes is a great man, I like him for his management and his skills. The Rackspace did a great job. Though the cloud load is full and it seems to heavy to visit. But they said that it will be ok. Waiting to see what happen in the next. there are many reviews of research paper writing services regarding the issue.
Reply  |  Post Message  |  Messages List  |  Start a Board
Editors' Choice
Hot Topics