50%
Tweet
VMware will launch vCloud Air in Melbourne, Australia, and take the beta label off its Japan service.

While Amazon marches into Germany and IBM invades mainland China with new cloud facilities, VMware is also extending the borders of its vCloud Air service: It's going down under.

VMware will offer public cloud services from facilities in Melbourne, Australia, to serve the immediate Victoria regional business and consumer community and also parts of the nearby Asia Pacific region, said Scott Collison, VP and general manager of vCloud Air in an interview with InformationWeek. They will become available in the first half of 2015.

Data that originates in Australia will remain in Australia in data center facilities provided by VMware's Australian partner, Telstra Global Enterprise and Services. That guarantee is meant to address the growing reluctance by overseas customers to rely on US-centered cloud service providers, and to meet Australian compliance and data privacy concerns, Collison said.

VMware also offers vCloud-compatible services through an extensive network of partners. Its vCloud Air Network includes service providers operating from 20 data centers in Australia, Collison said. VMware is trying to establish its presence in the public cloud market by emphasizing the ease of managing cloud workloads from the same management console that governs virtual machine operation in the enterprise.

VMware is also offering vCloud Air services in Japan in a beta program that began in July. The public cloud services are offered through the data center facilities near Tokyo of its Japanese partner SoftBank. They will become generally available to customers "in the coming weeks," VMware's announcement said Tuesday, with 50 beta customers currently using the service. 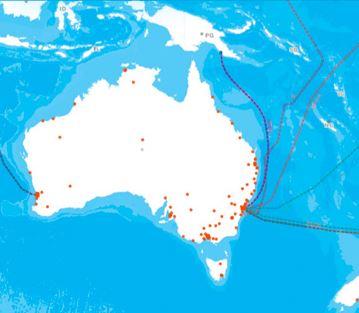 VMware already has vCloud Air services in operation in Slough, UK, and in Germany. VCloud, originally known as the vCloud Hybrid Service and redubbed vCloud Air in late August, operates in the US out of data centers in Santa Clara, Calif., Las Vegas, Dallas, and Sterling, Va. VMware leases wholesale data center space or uses a colocation provider, rather than building major data centers, as Facebook, Microsoft, and other companies do. VMware also has two government-oriented FedRamp services in Arizona and on the East Coast.

Collison said it is increasingly important to VMware to have a global presence, because customers want to be able to back up their virtual machine-based systems in the cloud rather in their own facilities, where a disaster might strike down both the primary and backup systems. "Right now, there's a huge market for on-premises-to-the-cloud disaster recovery," he said.

Charles Babcock is an editor-at-large for InformationWeek and author of Management Strategies for the Cloud Revolution, a McGraw-Hill book. He is the former editor-in-chief of Digital News, former software editor of Computerworld and former technology editor of Interactive ... View Full Bio
We welcome your comments on this topic on our social media channels, or [contact us directly] with questions about the site.
Comment  |
Email This  |
Print  |
RSS
More Insights
Webcasts
[Virtual Event] Doing More IT With Less
How Cyber Attackers Will Use & Abuse AI, ML Against the Enterprise
More Webcasts
White Papers
Getting The Right Cloud Management
Attack Surface Visibility: The Foundation of Effective Cybersecurity
More White Papers
Reports
The AI and Human Element Security Sentiment Study
Collective Offense Calls for Collective Defense
More Reports

VMware is doing what Amazon Web Services, Microsoft and IBM have already done, and that is, building a global network of data centers from which to offer their cloud services. In the future, systems and the compjuting that sustains them will be trans-national. No single national boundary will be large enough to contain the system. They will be daisy chains of data centers reaching around the world.
Reply  |  Post Message  |  Messages List  |  Start a Board
Editors' Choice
Hot Topics